After our day of town-hopping, we headed down to Albany which is around a 3 hour drive from Margaret River in the very South of WA. To make the journey a bit more interesting we broke it up with some sights on the way down.

First we went to Pemberton to the Gloucester Tree in the Gloucester National Park. I had heard about this tree from my dentist and so we thought we’d see what it was like (I wouldn’t be surprised if my mum will be having words for suggesting something dangerous haha!). This tree was used for watching out for forest fires and is 53m high. It has metal rods going up it which were used as a ladder to climb to the top. There is no supervision or harnesses, just a little sign that says to wear proper shoes, not to go on it when it’s wet and to not climb it if you have a heart condition (nothing to stop you doing any of those things). Of course we had to give it a go! 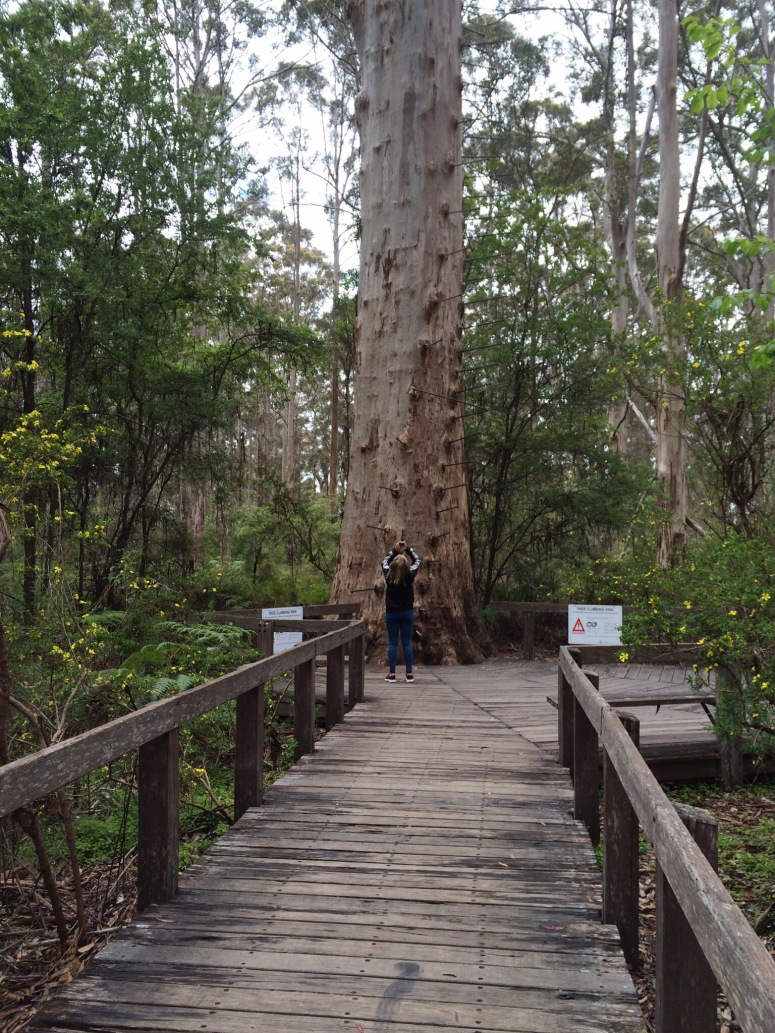 It was actually quite scary climbing up it. Just knowing that if you slipped or let go you would fall out the tree. My legs were shaking a bit as we climbed! The views from the top were great, you were over the rest of the trees and were exhilarated from the climb. It got a bit windy when we were up there so we had to be careful climbing back down. It was a bit nerve wracking seeing as you had to look down a lot to see where your feet were going so you were very aware of how high up you were! 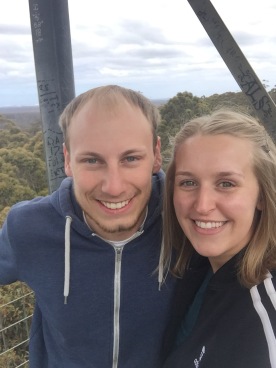 Our next stop was to The Valley of the Giants which has a tree top walk and an Ancient tree walkway which tells you all about the giant Tingle Trees. The walkway is a suspended bridge through the trees and was built to protect the forest as Tingle trees have very sensitive roots. The walkway wobbles and sways when you walk on it which is a bit alarming when you first do it.

The walkway also had an Ancient walk which told you about the trees and this was on ground level. Tingle trees are enormous! There are a few different types and some have massive hollows in them from forest fires. The fires don’t killed the tree just hollows them and then that hollow grows with the tree, getting bigger and bigger.

One tree was called Grandma Tingle because the knots and branches made it look like a face (like in Pocahontas)! This tree was 400 years old and was not nearly the biggest tree there!

After seeing a lot of trees we went to William Bay where there was a few pools that, in the summer, are very popular for swimming. Greens Pool and Elephant Cove are both bays that are slightly separated from the sea by rocks making the water very calm. We went on quite a windy day which made the contrast even greater as there was a rough, dark sea and then a very clear, calm bay. The beach was beautiful and there were big rocks around the bay to climb on to get a good view. We fully understood why people would come here in the summer to swim! 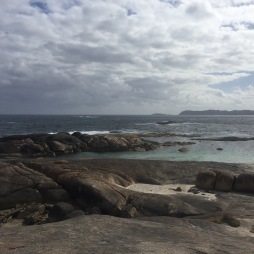 After that we headed to Albany which is an old whaling town along the south coast. We stayed in a nice hostel that made us pancakes for breakfast so it made it worth it just for that really! This was the most southern point on our exploration of WA.

One thought on “Trees, Trees and a Beautiful Coastline”