Canberra is the capital of Australia and, although it isn’t a common place for backpackers to go or as well known as a lot of the places we have or are planning on visiting, it was still on our list of places to see. Canberra was designed by an architect called Walter Burley Griffin from America. It was created after the separate colonies of Australia were federated to become states. Sydney and Melbourne had a huge rivalry so neither could become the nations capital and so they made Canberra in between the two cities as a compromise. It replaced Melbourne as the capital in 1927. I find it very interesting that they just decided to create a completely new city out of nothing for the capital in the last century and so was looking forward to seeing what the city would be like – particularly as London is so windy and compact from having been around for so long and organically growing over time!

On Monday 23rd January 2017, we got up early to catch a 7am train to Canberra which would take around 4 hours. We didn’t get off to the best start as, although we were on the right train, I had accidentally booked us tickets for the next day! Thankfully, the conductor was very lovely about it and found us some free seats and called to get our return train that evening rebooked for the right day so that we would be able to get back to Sydney – phew!

As we were riding through the countryside to Canberra, the conductor pointed out an area we were travelling through called Taringo where there had been a huge fire a couple of weeks before that had led to the train line being closed. You could see the vast damage that had been caused and I imagine it spread quite fast as the bushland looks like it would easily catch fire (especially when it’s so hot here).

Once we arrived in Canberra, we immediately noticed a difference from nearly every city we have ever been in – the station was at the edge of the city. It was quite a walk into the city from the station and we couldn’t find any buses so we got an Uber to our first sight of the day. I still find this baffling considering stations are normally so important to a city’s infrastructure but, I guess, seeing as the city was custom built for the capital it didn’t need the station to be its hub and it was relaying on trade etc. 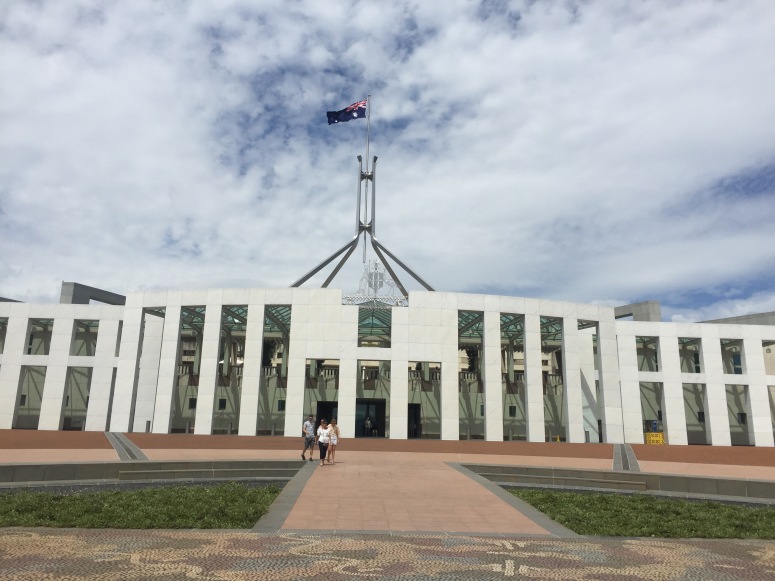 Our first stop was to Parliament House which is a very grand building with a large patio/courtyard area out of the front and the countries emblem and flag above it. I thought it was very impressive and I think you’d feel quite cool if you had to come to work here every day! Inside was equally as impressive as it had a large, open atrium that had grand staircases on either side leading to the main floor which holds the Great Hall, the Senate and the House of Representatives. I liked how the Senate and the House of Representatives had different colour schemes to distinguish them and the seats were quite comfy too. This is a big difference from our Houses of Parliament as it is so old through hundreds of years of history and so not all party members are able to get a seat in there for question time/debates etc.

There was also a lot of artwork here. There was an exhibition about the importance of sport in Australia over the years which had some good pieces and then there were portraits of important people in Parliament as well as our Queen Elizabeth (Australia really like our royal family!) 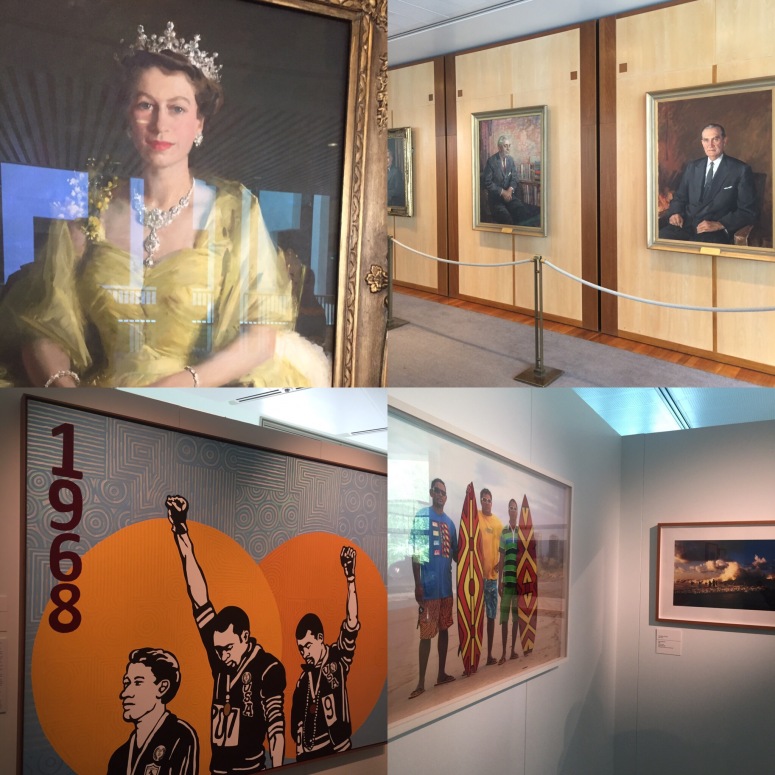 We had a nice walk around here and also saw a copy of the Magma Carter. One of the originals is kept there but was undergoing some restoration procedures – Australia houses the South Pacific copy here. 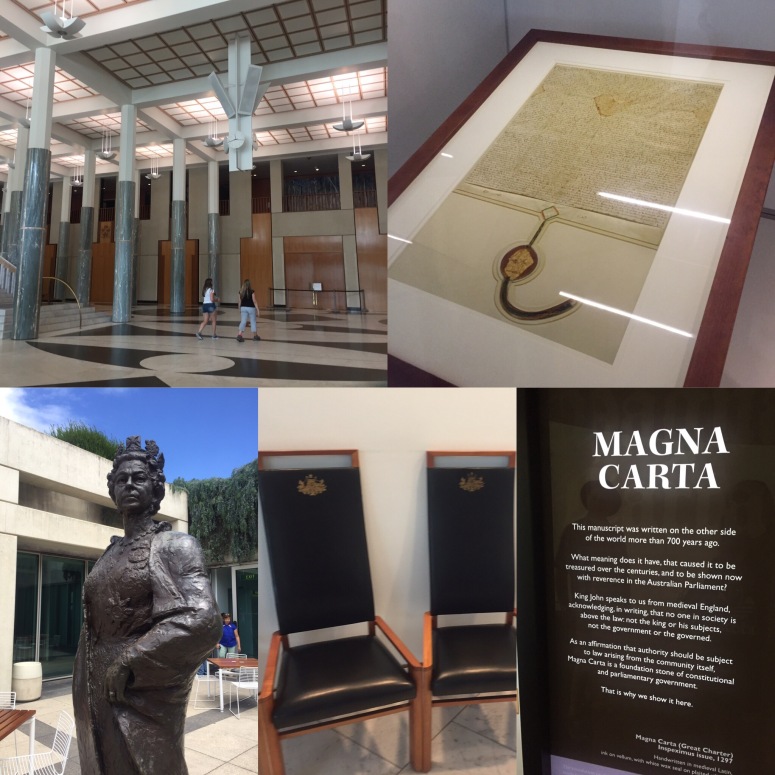 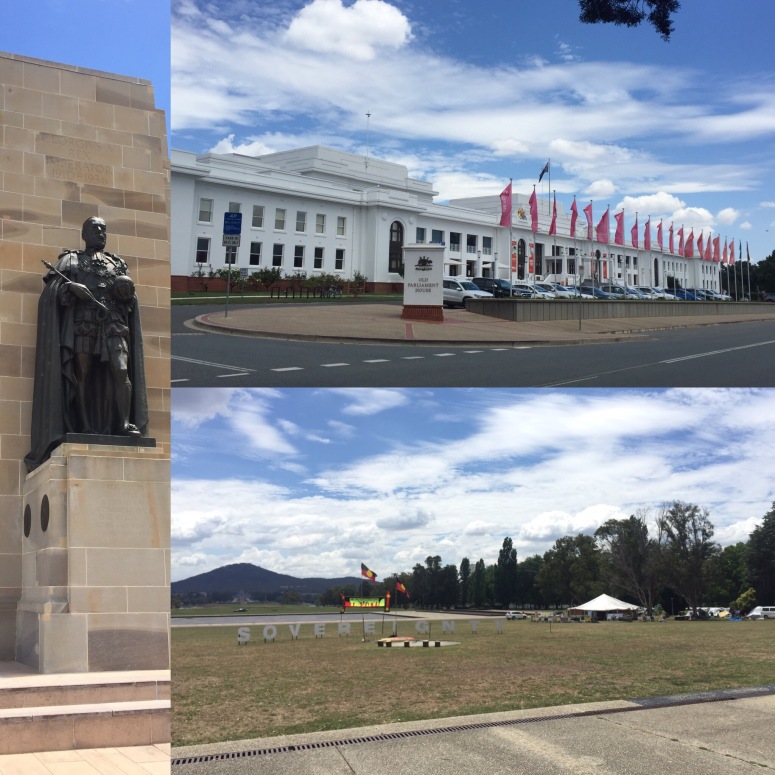 On our way to the National Gallery of Australia, we passed the High Court of Australia which was another impressive building. It was very grand and had a lovely water feature leading up the main steps to the entrance. 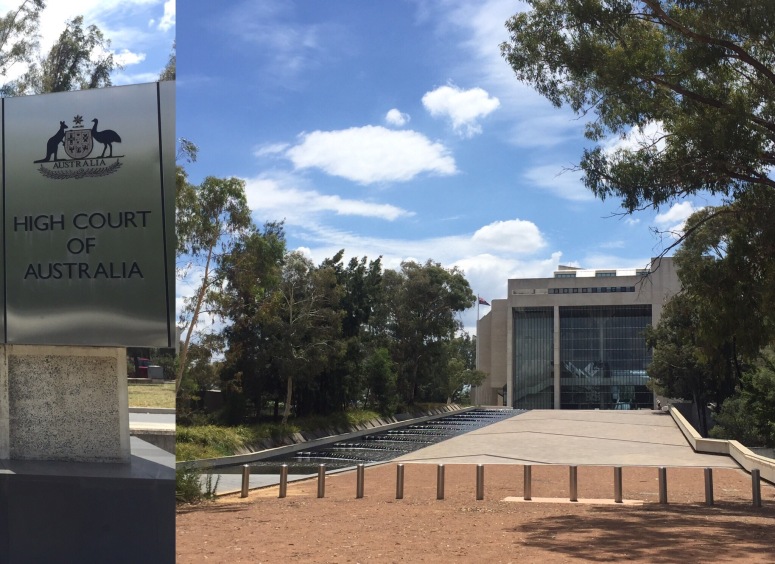 Niall and I aren’t massive art people and art galleries are often something we’ll skip when mentioned in the lonely planet or trip advisor. Despite this, we had heard of a special sculpture that was being housed at the National Gallery of Australia that we had to go and see. The gallery is enormous and we had to ask to find what we were looking for but it was worth it to see a little piece of home. 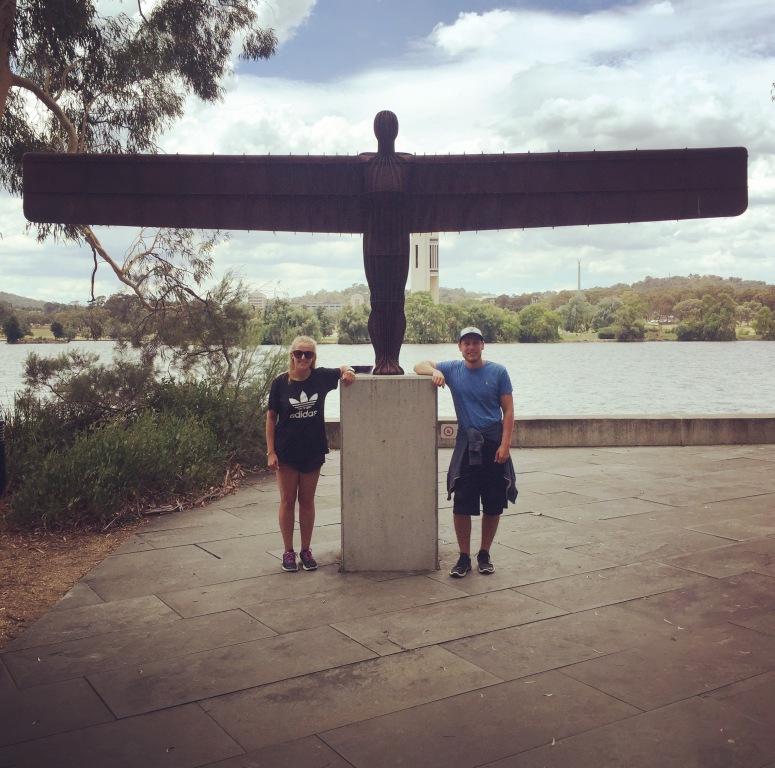 For some reason, Canberra has a little sculpture of our beloved Angel of the North! It was worth going to the gallery just for that. We did then have a little look around the rest of the sculpture park and we liked one piece that used fog machines – some of the sculptures were quite good. 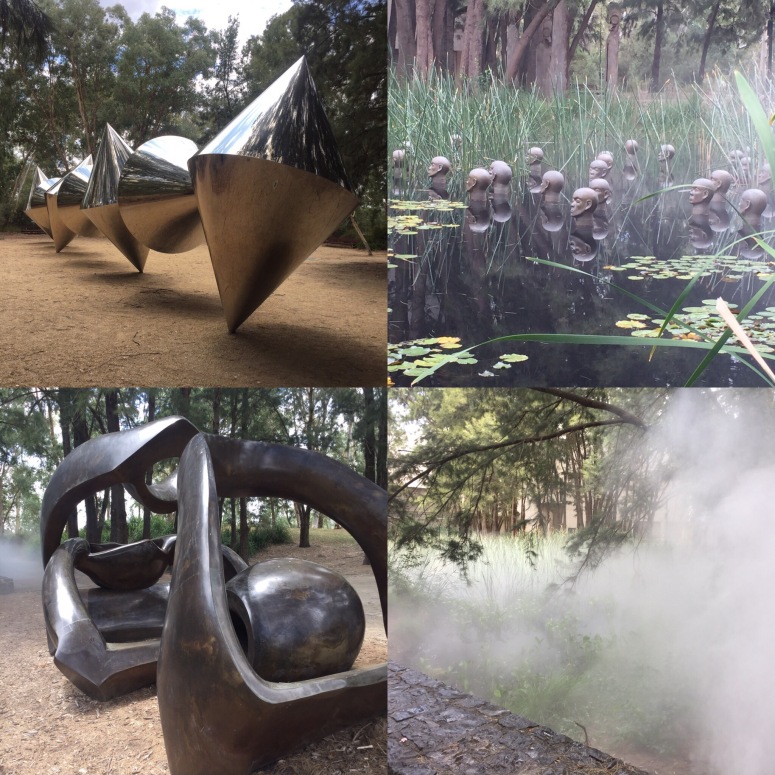 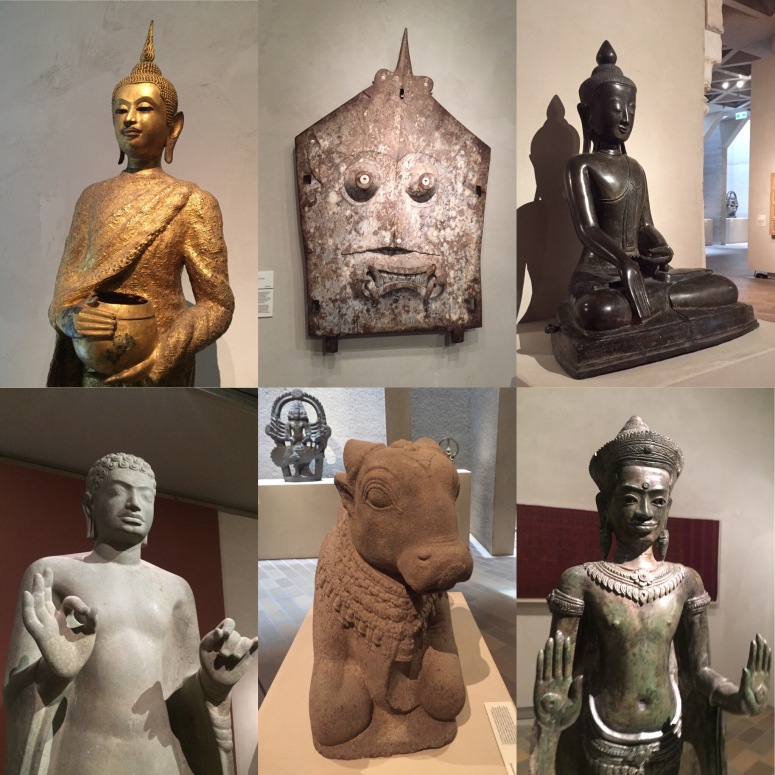 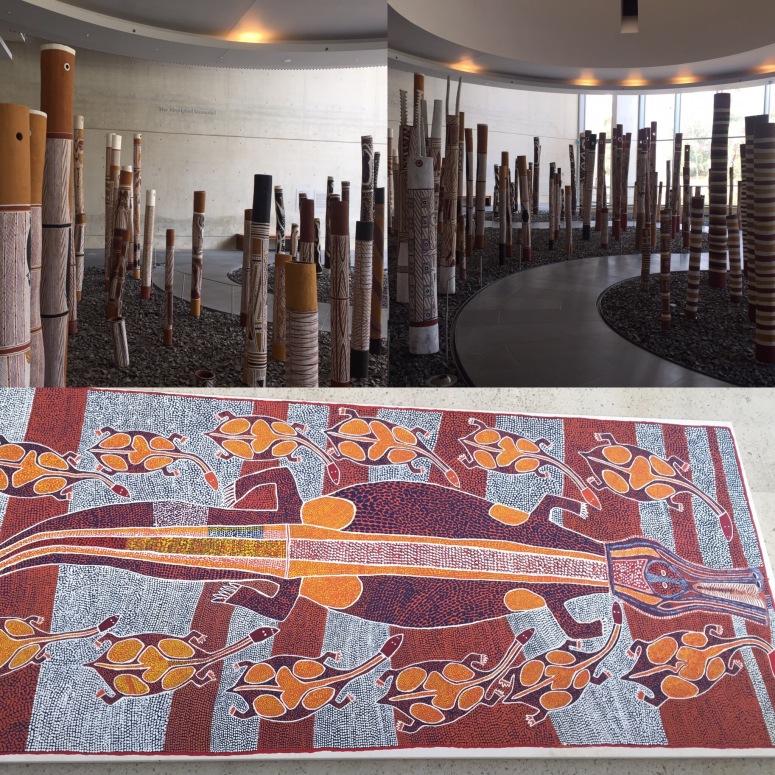 Canberra has a giant lake called Lake Burley Griffin in the middle of it (which I think is man made) which was our next stop for the day. There were loads of countries flags along the water and it was a nice walk to our next stop. 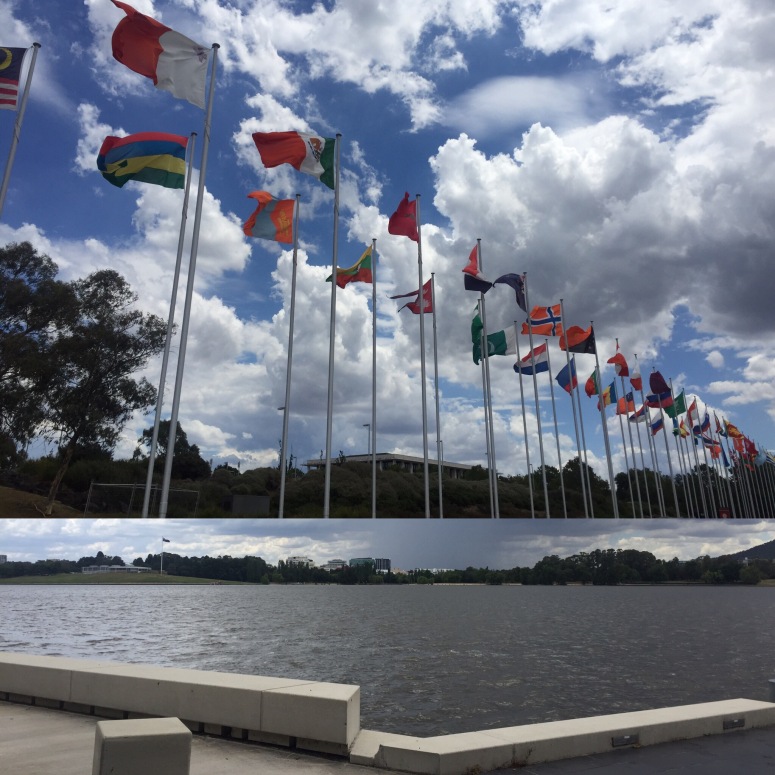 We went to go to the National Library of Australia but when we got there we were ubderwhelmed by the building (considering Victoria’s State Library in Melbourne is so nice – mentioned in one of my other posts) so we didn’t bother going inside. 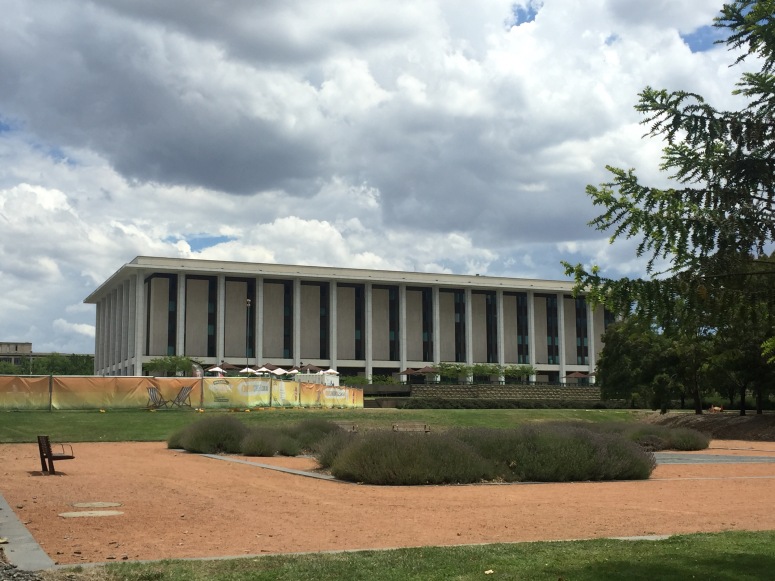 Next, we walked to the Australian War Memorial. It was a very hot day in Canberra so was thirsty work walking around the city (it really could do with some sort of hop-on-hop-off bus or something). The walk there took us along a memorial road which had statues and signs for different countries, wars and departments in the army (such as soldiers, nurses etc). Every time we see a memorial like this we are surprised by the number of countries and wars that Australia has been a part of. 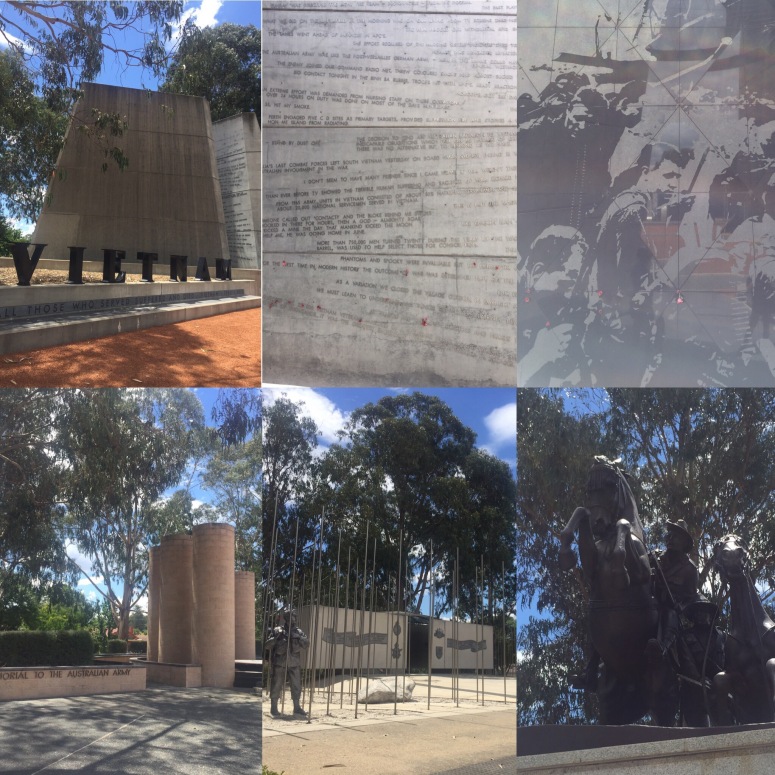 The main memorial was very big and made of light stone – it was a really impressive memorial. Australia are very good at war memorials, maybe because of the space they have to work with, and we haven’t been to a war memorial yet that has been a disappointment. 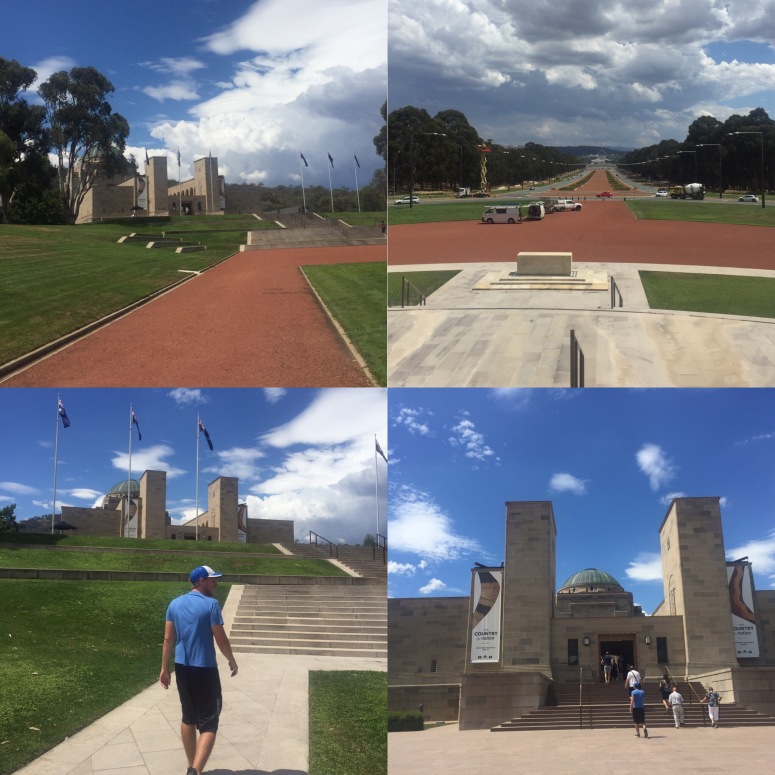 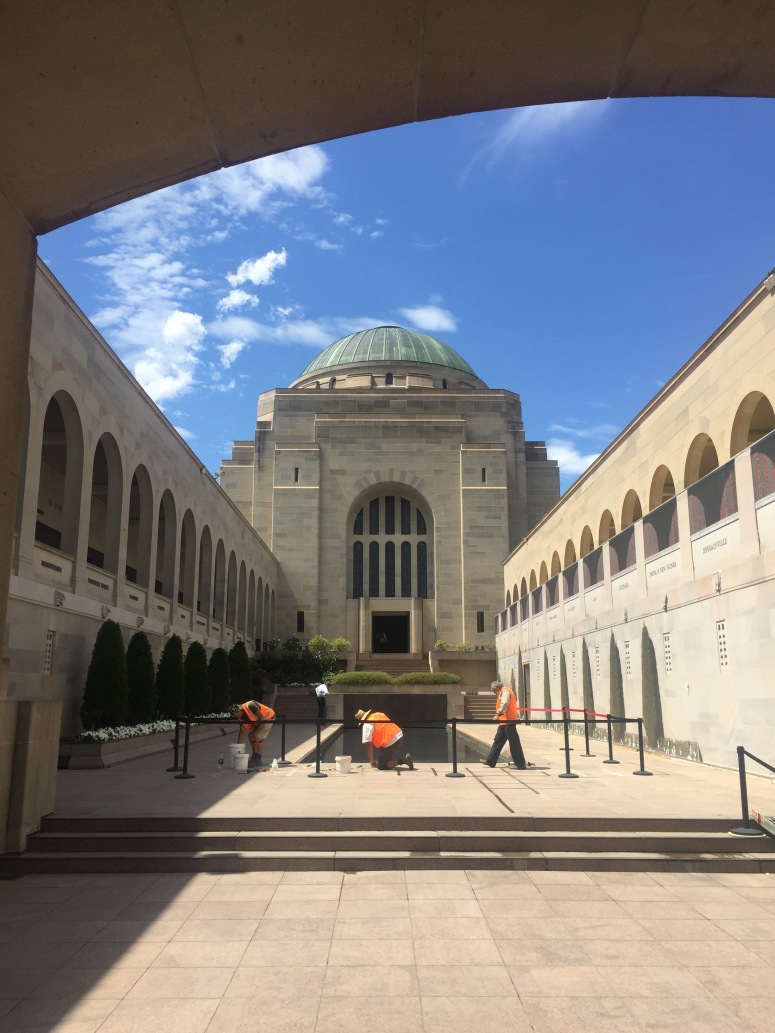 This memorial also had a war museum attached to it which told you about World War One and World War Two. I focussed on WW1 as I don’t know as much about that one and it was very interesting learning about how Australia were involved. They were only ever a voluntary armed forces and never introduced conscription like in the U.K. A lot of their focus was in Africa as Turkey sided with Germany and so the allied colonies needed protection. ANZAC (Australia and New Zealand Army Corps.) was created when they were sent to Egypt to fight in the desert. They had two divisions, one of which was a mix of New Zealand and Australian forces. ANZAC become their name in Morse code and is used today in all the war tributes. The museum was very detailed and showed a range of what went into the war. It also had remembrance corridors with names, pictures and poppies which was very tastefully done. 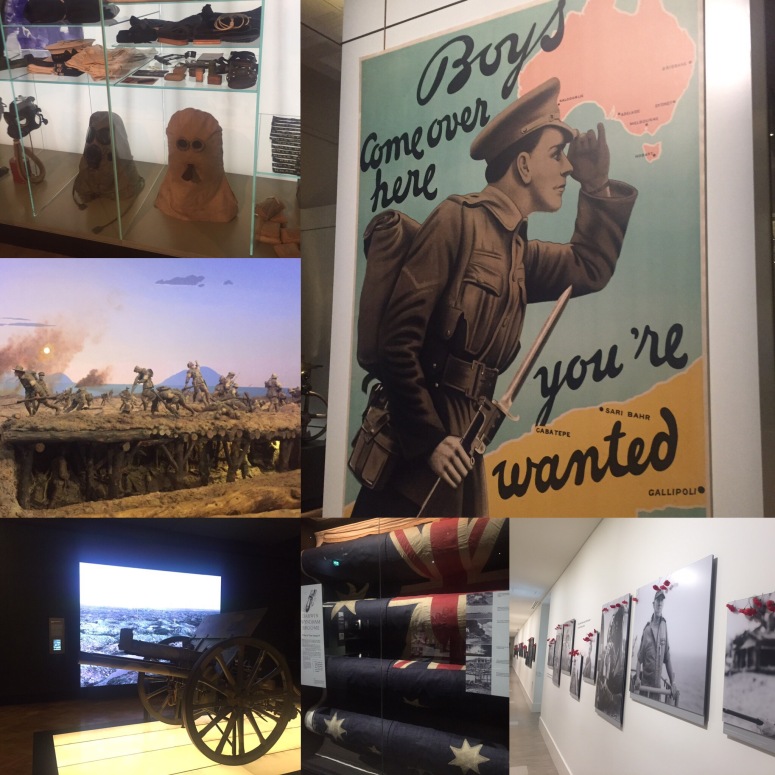 We only had 5 hours in Canberra before the train took us back to Sydney so we couldn’t see everything the war museum had as it was massive. Our next stop was into town to see what the CBD of Canberra was like. One of the things we found most strange about Canberra is the lack of people. We would walk for half an hour from one place to another and only see one person. Even in the centre of the city it was very quiet and, by 4pm, many of the shops were closed. Maybe it was so quiet because it’s summer and Parliament is not in session and the university are on their summer break but it still seemed strange to us. 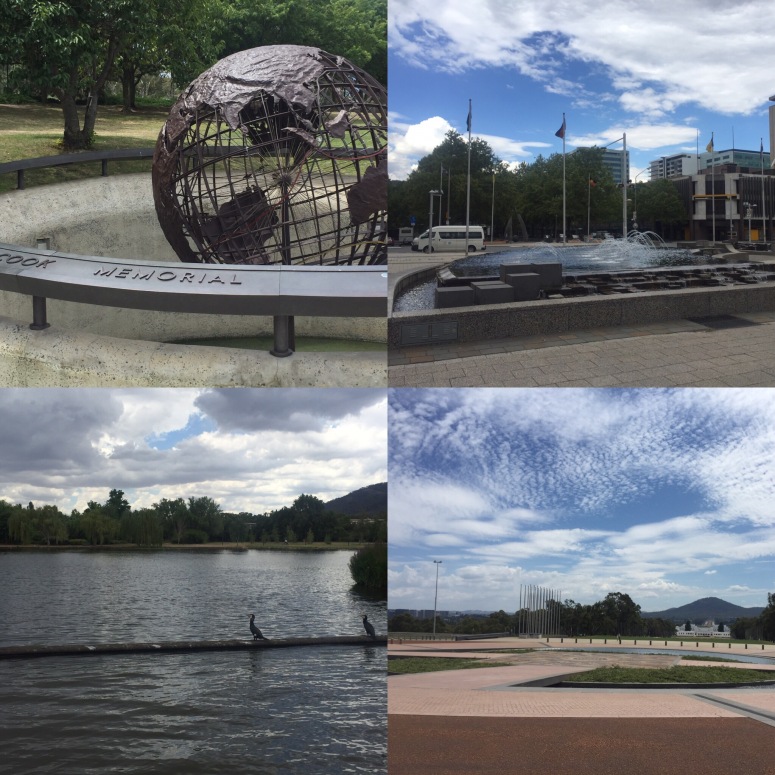 We enjoyed our day in Canberra and are glad that we got to visit here for the day. You can really tell the difference between an organically structured, growing city like Newcastle or London and a man made, architecturally designed city like Canberra – it’s still very pretty though but probably better suited for visiting with a car!