On the 19th March 2017, we had to be up at 6am to get our first Kiwi Experience bus to Paihia in the Bay of Islands. As it was still dark when we got our taxi to where the bus would be picking us up, we got to see the Sky Tower all lit up really close which was cool as, even though we’d been up the Sky Tower, we’d only seen it lit up from far away in Ponsonby.

On the way the driver stopped off at the Whangarei Waterfall which is 28m high flowing over an old lava flow. It’s a pretty waterfall and you can kind of imagine the water being lava instead which would have been spectacular. We only did a quick stop off here so it wasn’t long enough to go down to the bottom of the falls or do any of the walks around it but we still got to see it which is the main thing.

Paihia is a really cute little coastal town with a beautiful backdrop of the Bay of Islands. The water was really calm while we were there which gave the place a relaxing vibe to it. We had a tour to Cape Reinga included in our bus pass and also wanted to get to see a bit more of the Bay so we were spending a few nights here – the kiwi experience bus would have only had you there for one night! 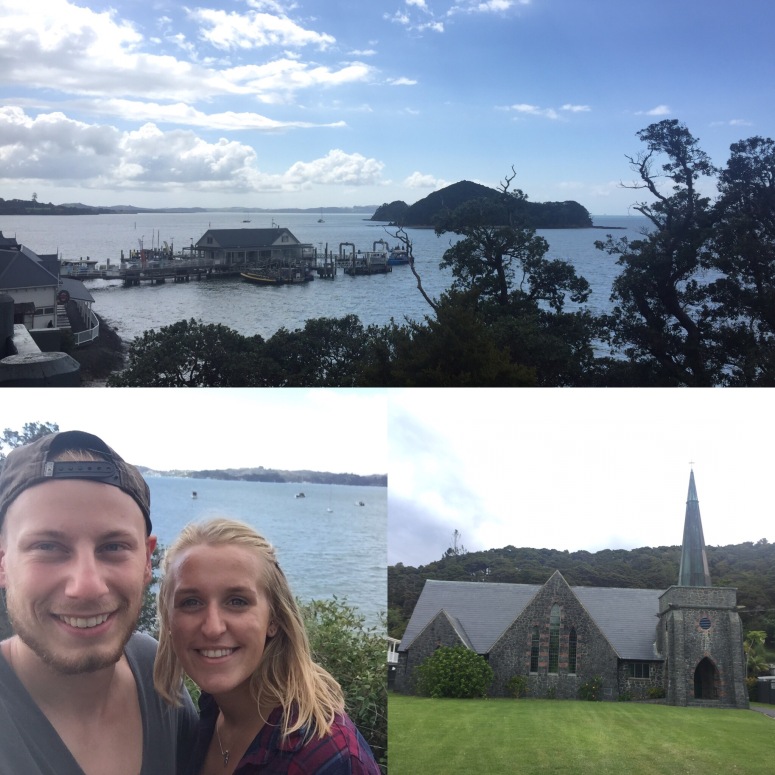 The next day we had a full-day tour to Cape Reinga which is pretty much as north as you can go in New Zealand (there is a bit that’s further north but people can’t go there). Our tour guide was Maori and he told us all about the history of New Zealand from the signing of the treaty that started off colonisation of New Zealand to when Maori’s were oppressed and then to the Maori language being reintroduced into the country and teaching it in school. I think it’s great that all children are given a basic understanding of Maori culture and that, if you want, you could go through all of school and university in Maori. Our guide told us that the government has 7 seats that have to be Maori which represent the 7 canoes from different places that landed around New Zealand that started off the Maori’s (6 of these canoes were in the north and there was 1 in the south). We were taken aback by the stark difference between how New Zealand treat the Maori’s compared to how Australia treat the Aboriginals which is probably more shocking considering the Aboriginals are one of the oldest civilisations in the world!

The treaty that made New Zealand part of the British Empire is still a big part of protecting the rights of the Maori’s today. Many Maori tribes have taken the government to court over ownership of lands and, most recently, over the ownership of New Zealand’s water as the government want to privatise it (water is ‘awa’ in Maori).

We headed up to the northern most part of the north island (that you’re actually allowed to go to) and to get there we drove our big bus along Ninety Mile Beach. It’s 88km long but we travelled 78km of that and apparently the ninety miles are nautical miles as it was measured by an explorer on a boat. Despite being on the sand, the beach is a state highway so is governed by the same rules as the road. The Maori own all the land in the area too from the treaty which is interesting. 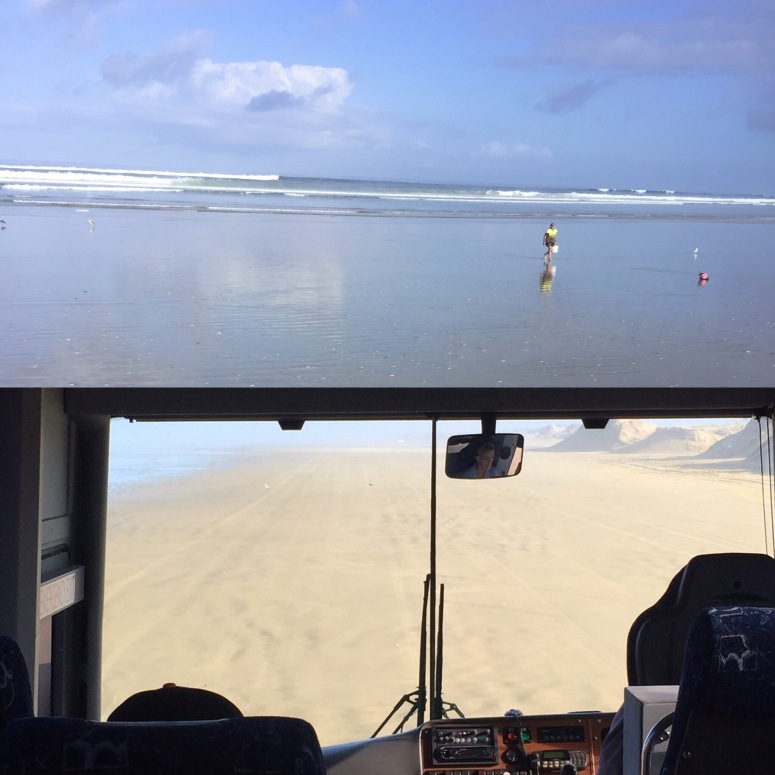 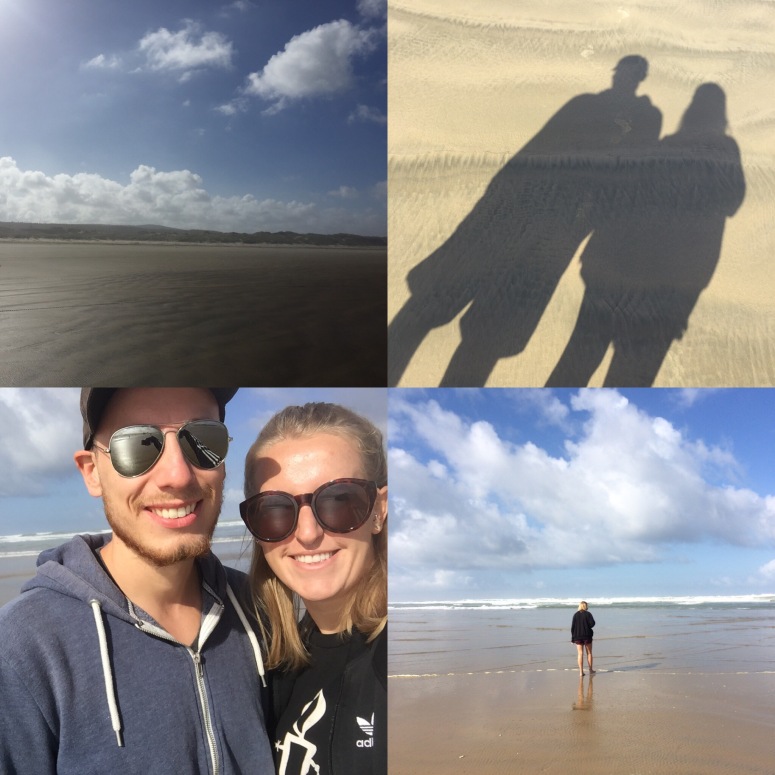 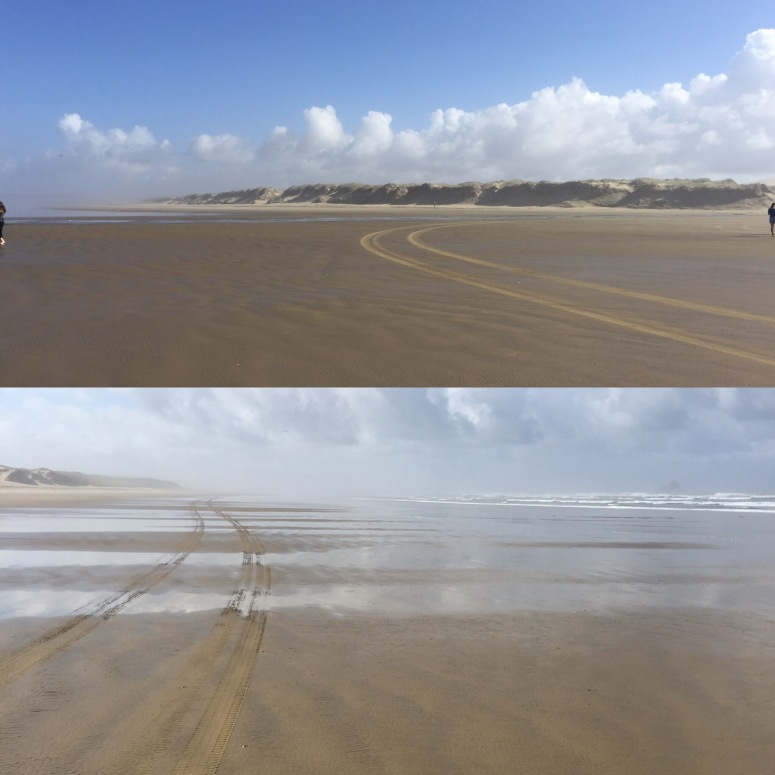 We then headed to Te Paki Sand Dunes which were really high and surrounded by even more sand dunes for miles. The views from the top were spectacular. We were here to sand board. The guide picked the best slope and then handed out the sand boards before we all started the tiring walk in the sand to the top. Our guide showed us how to lie on the board and we took off down the slope. You went incredibly fast and, so long as you kept your board straight, you flew down the slope. My feet scraped on the sand as I went down which grazed me a bit and took off my nail varnish – the guide told us it was the same sand they used for sand paper! We wanted to make the most of getting to sand board so managed to climb up the dune 3 times, some people stopped after doing it once because the walk to the top was so tiring. 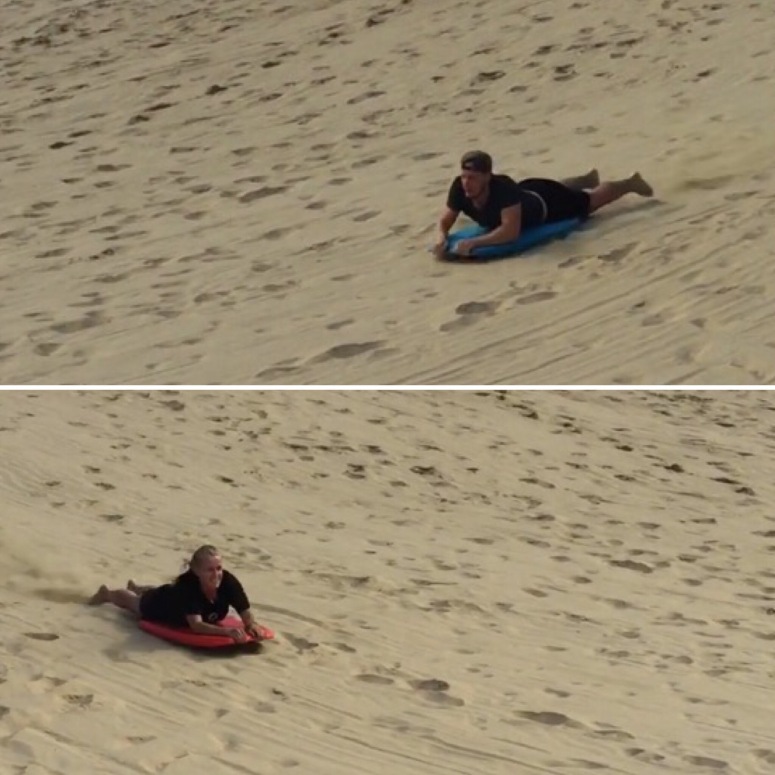 Cape Reinga looks out onto the meeting of the Pacific Ocean and the Tasman Sea. This is shown by waves colliding in the middle of the water and there is a slight change in the colour of the water around this point as the sea and ocean collide and mix together. There is also a big white lighthouse that is still in operation today overlooking this meeting point and the view along the entire coastline from here are great, especially on a sunny day like we had.

We stopped for lunch at Tapotupotu Bay which is a really pretty, little secluded Bay that our driver knows about from going on family trips in the area. Here we were told about Maori tattoo’s and their meanings. They can be really significant with meanings ranging depending on the patterns, styles and locations on the body. Our guide told us that the left side of the body signified your more gentle side and so was often linked to family and your right side signified the warrior. He also told us that tattoos on women’s feet in the Maori style would signify them connecting with Mother Earth which I thought was lovely.

It was really interesting listening to our guide and hearing all about Maori culture and hearing the language being spoken. I found it all very interesting and love that their heritage remains so strong. We had a lot of driving to do to get back to Paihia and, on the way, we stopped at the Mangonui fish and chip shop that gave you a really cheap deal for fish and chips and overlooked the beautiful Doubtless Bay which was really peaceful with only the odd fishing boat harboured in it – an amazing setting to go to work everyday! 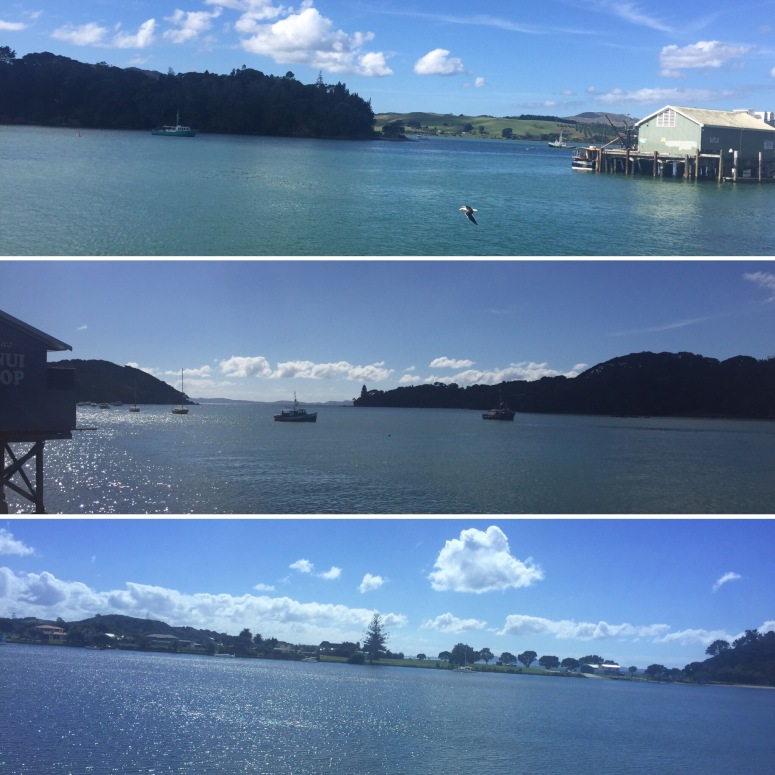 On the last leg of our trip our guide sang the New Zealand national anthem both in English and in Maori. He was a surprisingly good singer! He had been a great guide, telling us loads about Maori culture, the places we visited and making sure we all had a great time sand boarding. All in all we really enjoyed our trip to Cape Reinga!