On the 3rd April 2017 we headed to a very remote lodge called River Valley.

On the way to River Valley we stopped off for a 2 hour return walk to the Taranaki Falls. Our driver, Jared, had told me I could do the walk in sandals which wasn’t really true as the rain had meant the ground was boggy and muddy. I managed to make it relatively dry and clean mainly with just some mud splashes up my legs. When we reached the falls it had been worth the walk (which hadn’t been challenging even with my stiff legs from the Tongariro Crossing). 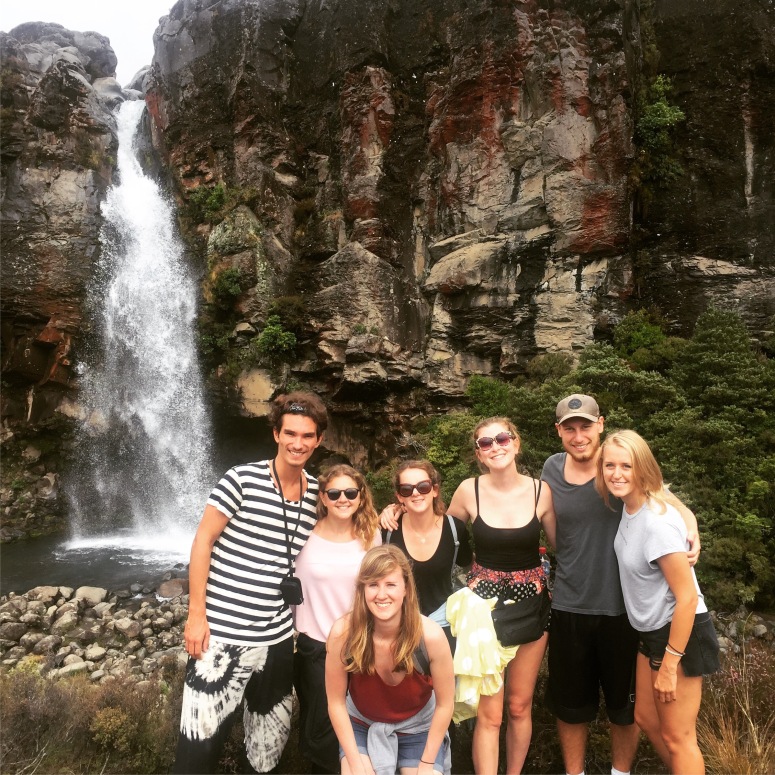 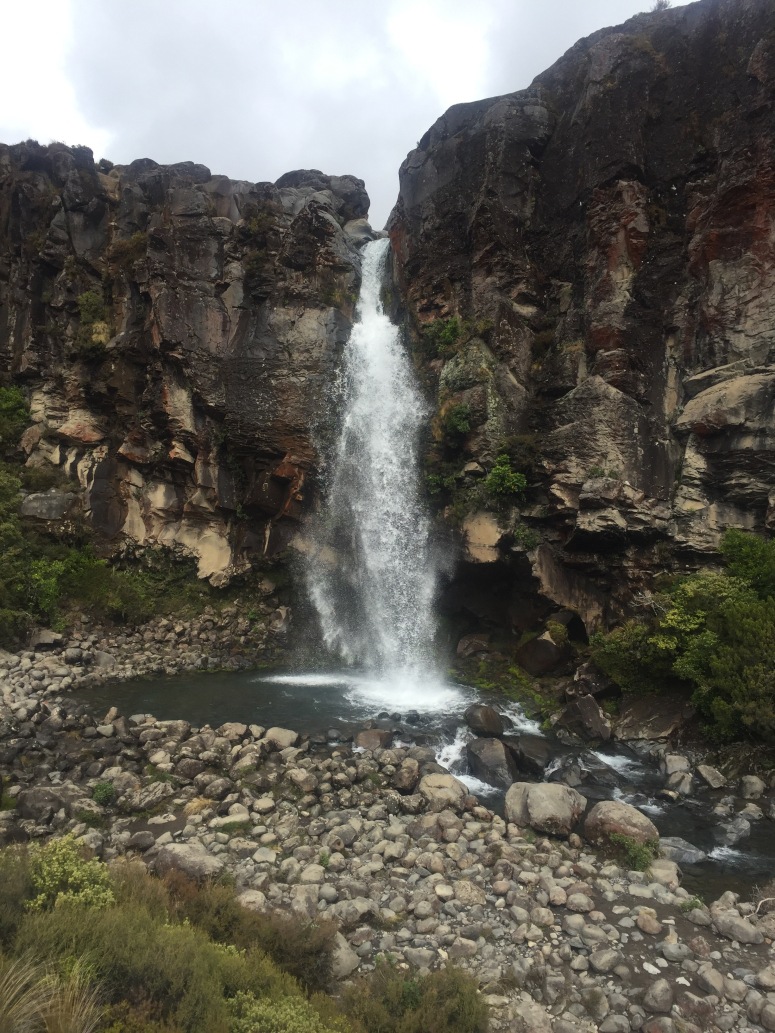 It rained on our way back to the bus which wasn’t ideal but ended up making my choice of footwear very handy as I had only just got my trainers dry from doing the Crossing.

We got to River Valley around 4ish. At the lodge there is no signal or wifi but that makes the place all the better for the night as everyone just socialises and has a good time. Our room was a giant 30 bed dorm which is kind of like one giant bunk bed with mattresses on. We weren’t a full bus so had some room to spread out and get extra pillows etc so it actually wasn’t so bad! 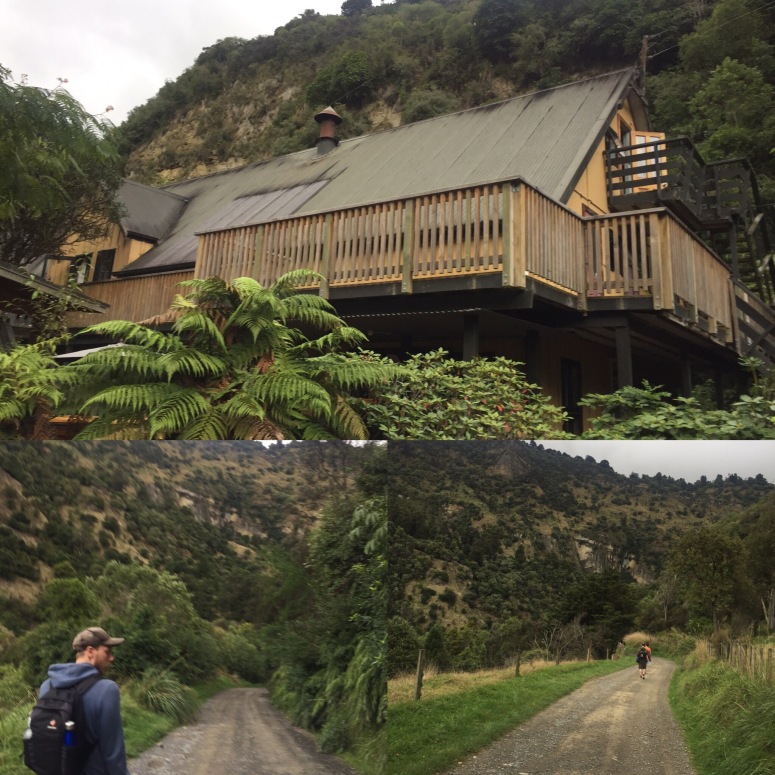 In the evening there was an option to get a roast dinner which everyone ate along one long table. It was $15, I’m a vegetarian and we had our own food already so we didn’t do this but the majority of people on our bus did. After tea we all drank and played games like heads up and ‘who am I?’. There was a challenge to try and get around the table without touching the floor. Niall got really close but couldn’t get a good grip on the other side of the table – the only person who managed it had been here before and had very long arms. There was also a challenge to reach the further whilst someone held onto you, Sophie and Shaz won that one so got a jug of cider.

As we were all going white water rafting the next day, I had braided my hair which then led me to braid nearly every girls hair on the bus! We got a picture of us all and one of the girls, Gabi, named us the Braid Brigade. It was one of those nights that starts early so ends early as we were already pretty tired and had to be up early the next day. 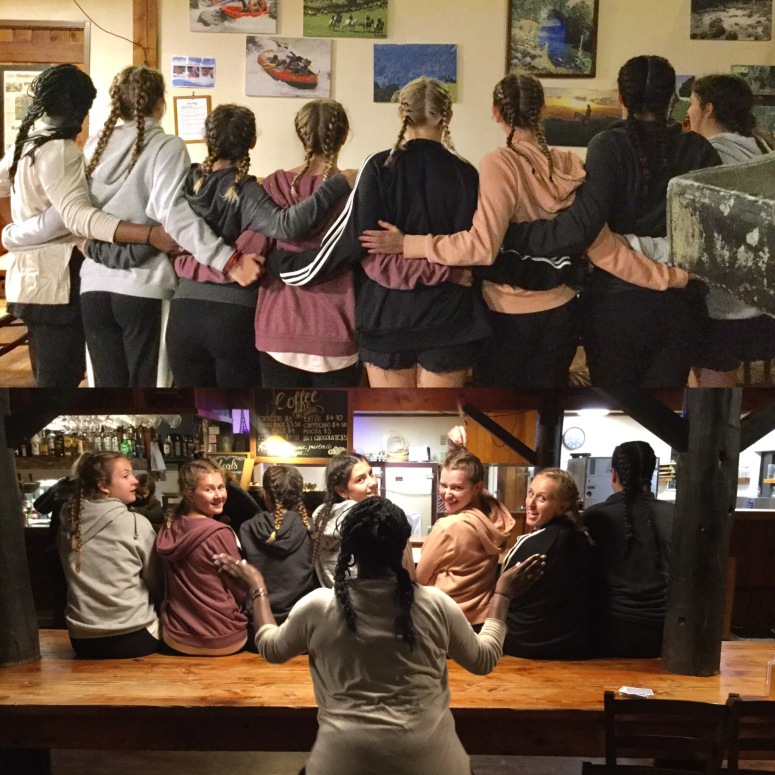 The next morning we were up early to get ready for rafting. We also had to check out of the room before the rafting began so had to get all of our stuff out of the room as well. Rafting began at 8am and it was cold and windy. We were given lots of warm clothes to wear which was a huge help! We had a thermal top on, then a fleece jumper which all went under a dungaree style wetsuit. On top of the wetsuit went a waterproof top and we also had wetsuit material boots and a helmet. It was surprising how warm the layers kept you even when you got wet – I think we had all been a bit sceptical about how warm it would be.

We were taken to the start of the rapids and would then be rafting all the way back to our accommodation. We split into two groups of 4 and then we both had 2 other people in our boats (I think they were all workers from the lodge – ours definitely worked there). We were in a boat with Safia and Alex who we have travelled with since Rotorua so it was a good boat. The other boat was Carla, Sophie, Faye and Gabi who are travelling together so either boat would have been good.

Niall and Alex were put at the front of the boat, I was then behind Alex on the right and Safia was behind Niall on the left of the raft. Our guide/instructor was called Eddie. We were taught how to turn, go backwards and how to distribute our weight around the raft when needed and what the different commands would mean. We had a really fun time rafting though a beautiful valley which was dotted with trees and the odd waterfall.

We got stuck a couple of times which was really funny. We once got stuck on a rock and had to all go to the very back of the raft to try and get off the rock. I got wedged between one of the workers and Alex and couldn’t move at all to help any further. This was incredibly funny to me especially because my life jacket meant I couldn’t even look around except stare upwards so I was laughing for pretty much the entire time we were getting free!

We did a range of rapids from grades 3 up to the highest grade 5 along 12km of river. This meant we got covered in water, did drops and were sloshed about. It was such a laugh and we thoroughly enjoyed it. One thing we did think though was that it wasn’t as full on as we had expected. By that I mean that there wasn’t as many rapids as we had thought there would be but I guess that’s from only seeing pictures which focus only on the rapids and from watching the Olympics which are obviously more intensely packed (and not natural). We still really enjoyed it and I think both of us would do white water rafting again if we got the opportunity (and had the money).

The location of this place was exceptional and we are so glad we got to do the rafting. We had been worried we wouldn’t be able to as the aftermath of Cyclone Debbie was making its way across New Zealand which was causing the river to flood so they were on their last day of being able to raft for a while. We were told a few days later than the next few buses were bypassing River Valley and heading straight to Wellington as the weather was so bad that you couldn’t do the rafting or horse riding (the other activity on offer).

Our next stop: Wellington, the final stop in the North Island.