A large part of your sightseeing in Seoul will be to its many grand palaces. We bought a combo ticket (available at any of the palace ticketing offices) for 10,000 won. This is great value for money really as each palace is around 3000 won with the secret garden in one of the palaces (the main attraction for it) costing extra so if you planned on visiting that and a couple of the other three palaces – or all of them like we did – you may as well get the pass.

I hadn’t known much about Korea’s history before coming to visit here so it was nice to see the palaces and learn a bit about their heritage. The palaces are very grand, full of intricately designed buildings and are a nice place just to walk around and enjoy, even when it’s freezing cold like when we were here!

This is the main palace and sits at the top of a giant long road called Sejong-daero which reminded me of Buckingham Palace with The Mall. Baegaksan Mountain is in the background of this palace and, as the day we visited was cloudy, we made sure to come back on a clearer day to have a look at the giant gates with this mountain in view in the background (worth it!).

The palace was established in 1395 for the Joseon Dynasty and the name literally translates to mean “brilliance and fortune”. Like a lot of things in Seoul, they’re not the original buildings as the Japanese burnt most things down when they invaded in the 1500s so it would have been even more impressive to see back then especially with all of the soldiers and servants in traditional dress going about their duty within the grounds.

We really liked this palace as it had some lovely buildings and some beautiful architecture and detailing. 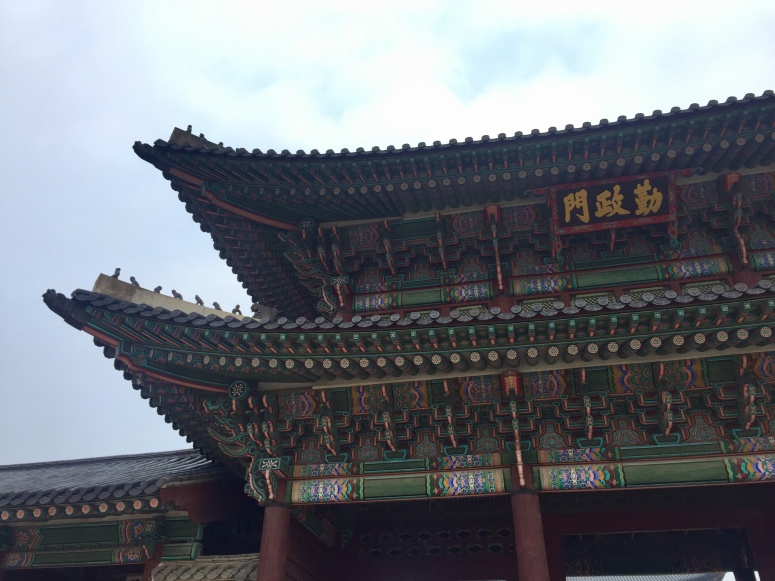 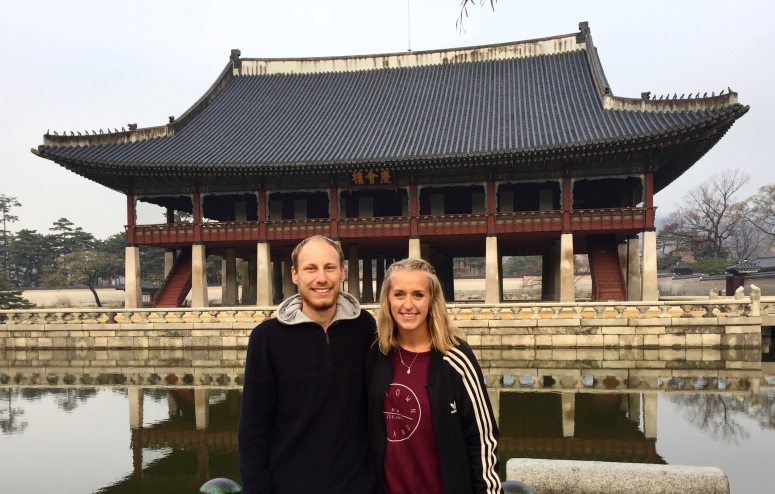 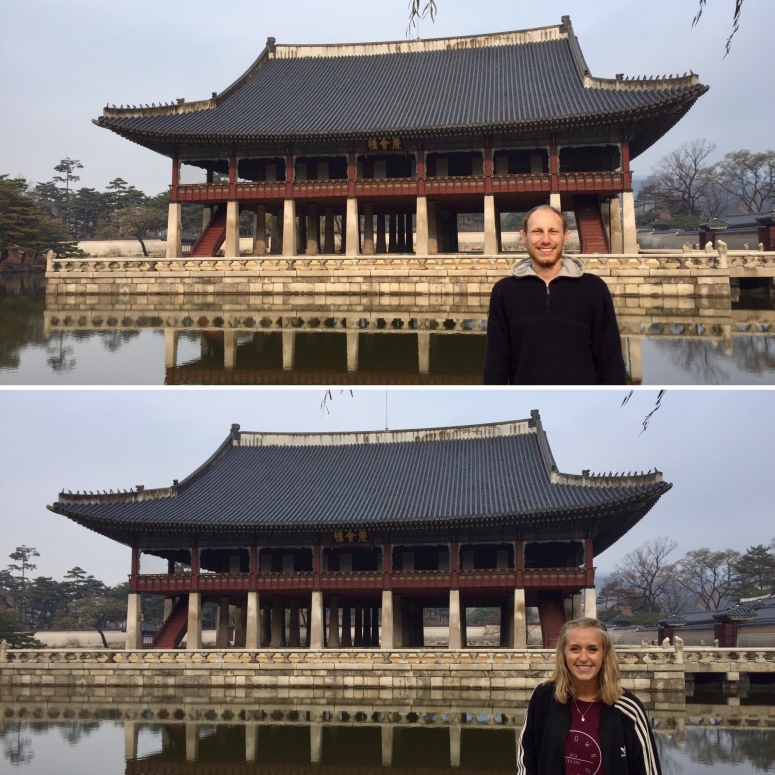 Whilst we were there they had a big change of the guard ceremony which involved a procession of guards entering the main square to the sound of drumming and then new guards, who are all dressed in a range of colours, proceeded to swap positions at the main gate. This was all done very well and was accompanied by a commentary explaining the ritual to us all which was interesting so that we had a better understanding of what was going on. I’m glad we got to see it. 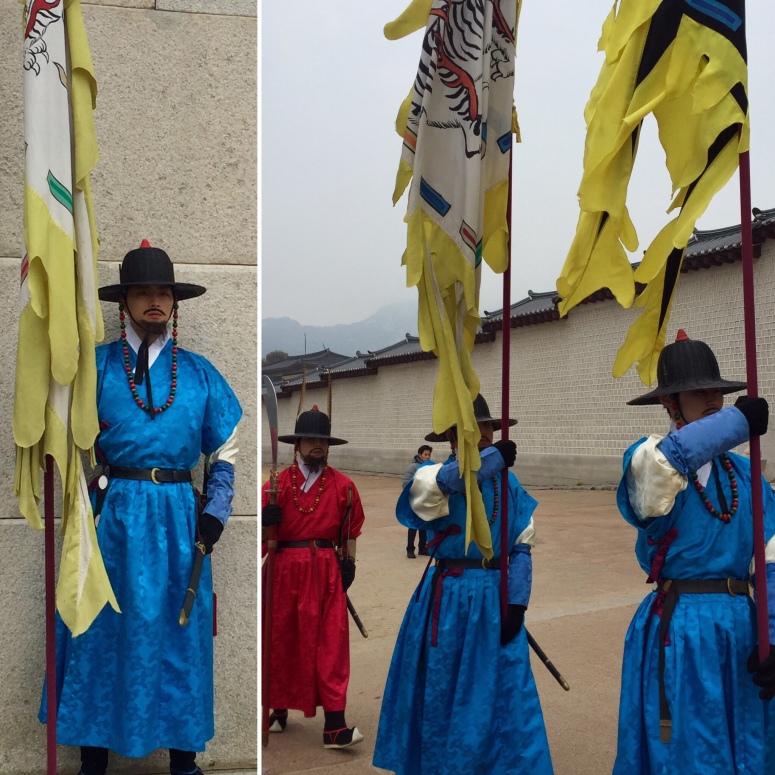 Whilst we were looking around we saw loads of people in traditional dress. Mainly women in large dresses with pretty patterns and a few men in the traditional outfits to match (I don’t think I’d be able to pay Niall to do that!). You could pay to wear the outfits for the day and we saw loads of people dressed up throughout the day we were exploring. I liked seeing them all in their outfits as I think it made the place look more authentic and you could kind of imagine the modern dressed people away and think of what it used to be like.

You have to get a guided tour here but this actually isn’t an issue as our tour guide was very interesting so I’m glad we took a tour really. Jongmyo Shrine is a ‘supreme state shrine’ where the spirit tablets of deceased kings and queens are enshrined and sacrificial rites are performed for them based on Confucian principals. From what I have gathered these sacrificial rites involve feasts as opposed to killing things so nothing too sinister going on there. South Korea is actually the only country to still preserve its royal shrines and perform the royal ancestral rites which is the reason this place was given UNESCO World Heritage status in 1995 – pretty cool.

A lot of the buildings have Chinese writing carved into them as that used to be the language of Korea. Our tour guide told us that an early dynasty king called King Singeon the Great made the Korean written language. He created it scientifically to make it particularly easy to learn which has resulted in there being nearly 0% illiteracy in Korea. I thought this was particularly interesting especially as his plan for an easy language actually worked! 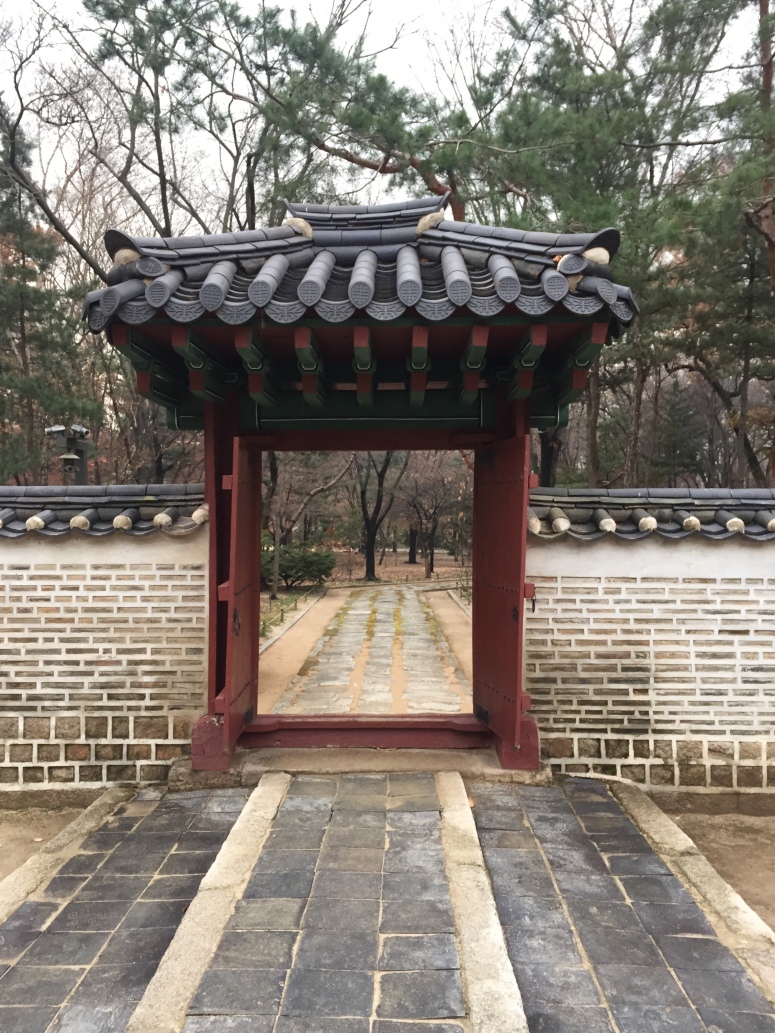 Throughout the shrine there are two paths to each building which all follows a particular route based on the rituals the king and anyone else paying respect from the shrine would follow. There is a spiritual walkway and the kings walkway to get a cleansing before going into shrine. This was interesting as the spiritual walkway took a different route (seeing as spirits don’t need to wash) and also to pay the spirits respect.

There are 35 kings in the shrine which consists of two buildings – a larger and smaller one. The style for the buildings is all in red and kept very simple. The colour red is used as it provides a strong energy to repel fire spirits from the site (the buildings are made of wood after all). The shrines had to keep extending to accommodate the next king and his wives that died and they did this for 220 years making the halls bigger and bigger. They ended up creating a secondary hall which was smaller and lower than the primary hall but set up in the same layout. This had 16 kings in and kings could be upgraded and downgraded depending on their accomplishments and those of the next king that died! Sometimes the secondary hall would have kings who had shorter reigns or posthumously made kings as they were less likely to have achieved as much. The shrines would have a wooden box that would hold the spirit of the king and then a box each for the spirit of his two wives. I would have expected the king to be in the middle with his wives on either side of him but he was actually placed to the west with his wives next to him. 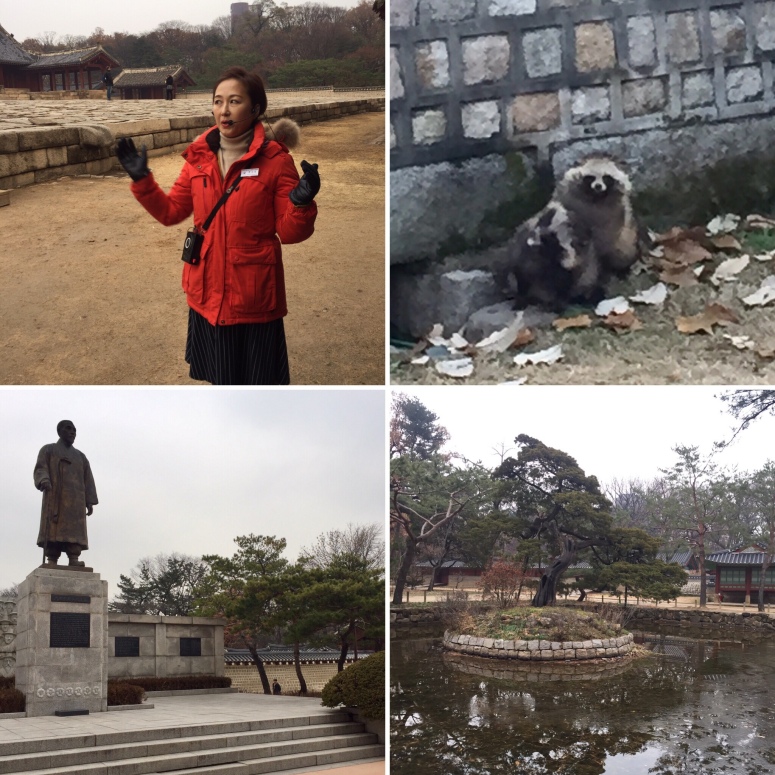 South Korea is now a republic so they don’t have a royal family anymore meaning there are no more kings to be added to the shrine but I think it’s really great that they have kept the place preserved and still perform the rituals in their honour – it’s important to hold onto your traditions and heritage after all.

This was the most beloved of the palaces due to the secret garden. You could only view the secret garden by a guided tour and the entry was extra if you were purchasing your entry tickets individually instead of using the combo ticket that we bought. The gardens takes up 60% of the entire palace grounds and are really pretty. The gardens were designed for the use of the royal family and their gentry to enjoy and, really, it’s not hard to see why they were so popular – even in the freezing cold the place was lovely to see. The main section of the gardens has a nice, traditional building overlooking a square pond. Because of how cold it was (-5 with -10 winds) the pond was completely frozen! It still looked very picturesque though and apparently they would get the odd wild tiger enter the garden which would have been incredible to see particularly in such a nice setting. Beats a simple house cat like you’d get at home! 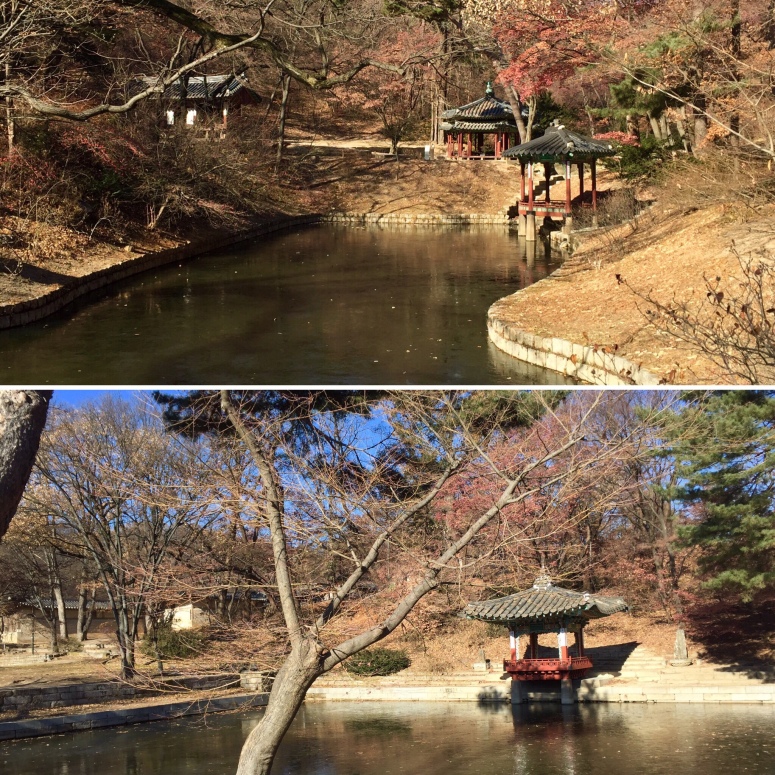 There were buildings set up to show what the gentry of the day would have lived in and we got to see the underfloor heating system the royalty would have used (using fire chambers under the floor). We have been able to experience from our hostel the strength of their underfloor heating – the Koreans have nailed it! 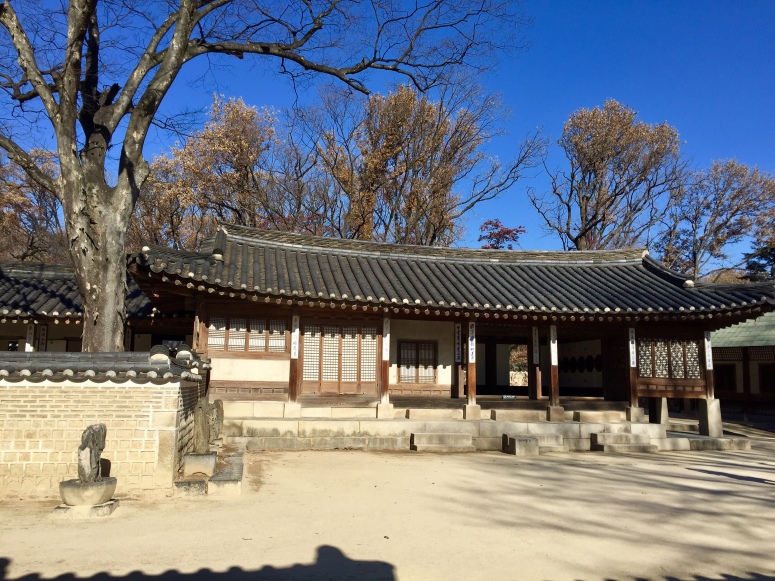 As well as the gardens there was also the palace grounds themselves that you could walk around independently of viewing the gardens. These grounds, like the other palaces in Seoul, had intricate buildings with lots of detailed roofs and colourful buildings. I really enjoyed the layering of patterns you could get when you looked through the many courtyards. 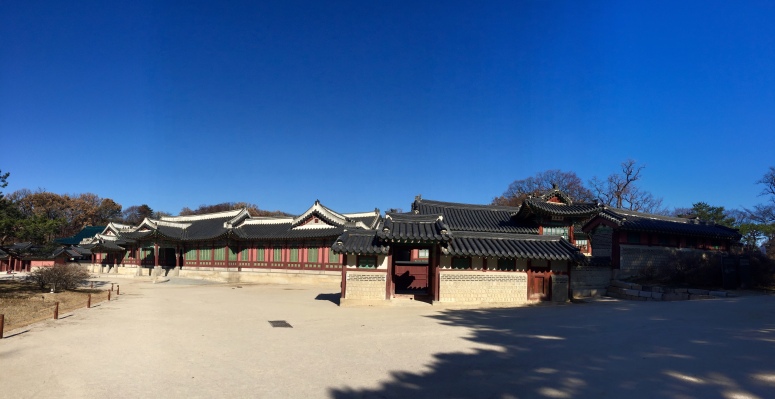 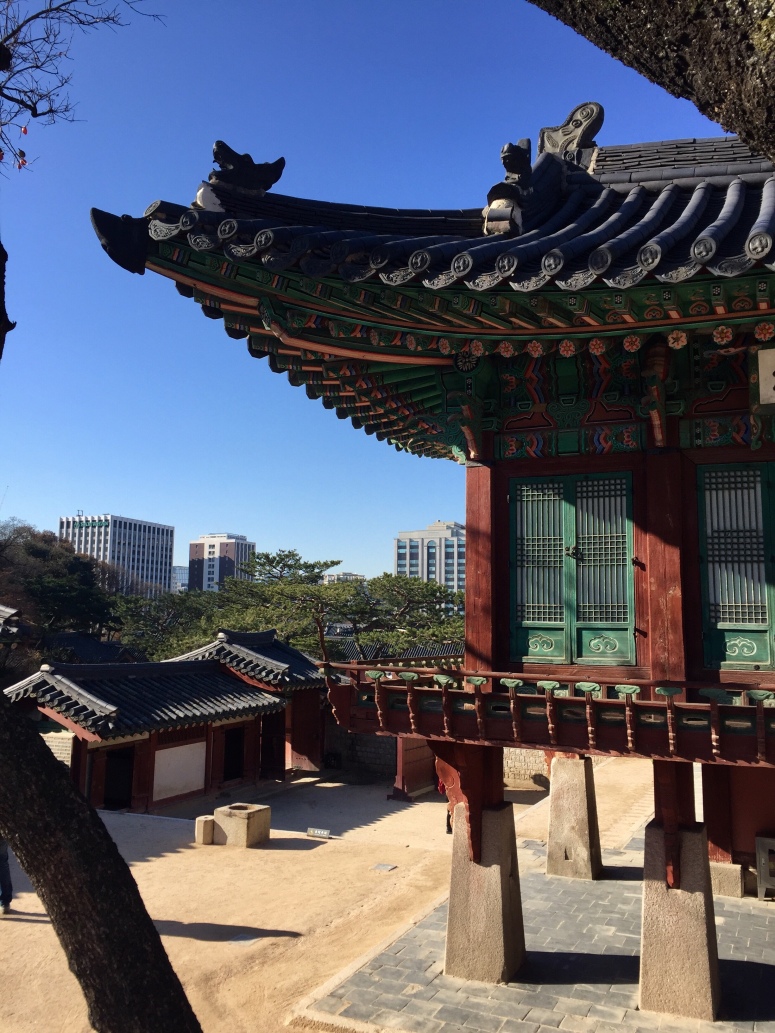 Aside from the bitter cold that was a struggle to deal with, I really liked this palace and enjoyed getting to see the secret garden even if we weren’t able to explore this independently.

This palace is connected to the gardens of Changdeokgung Palace and you can pass from one through to the other by an intricately designed gate. This was a smaller complex than the other palaces we had visited and was designed primarily for the elders of the royal family to live in. It also served as a home for the King’s mother, grandmother and concubines and remained so even after his father passed away. This palace has a large courtyard with a range of different buildings in it that they would have lived in. 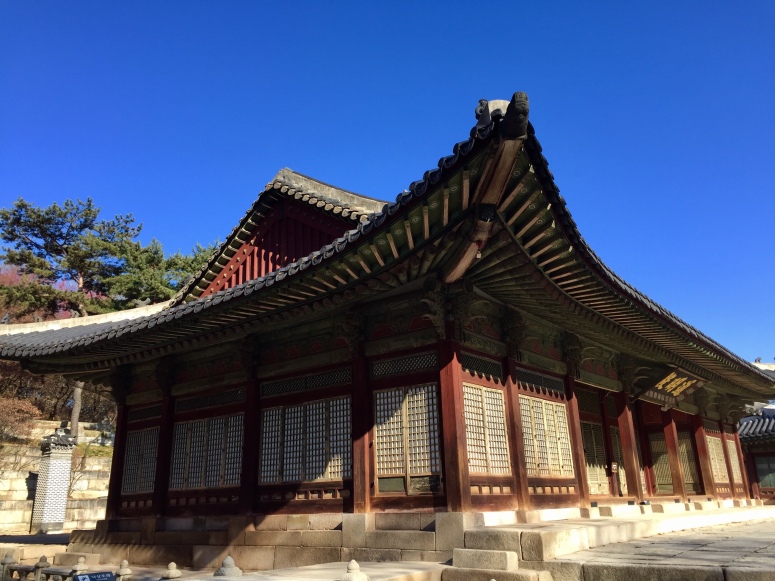 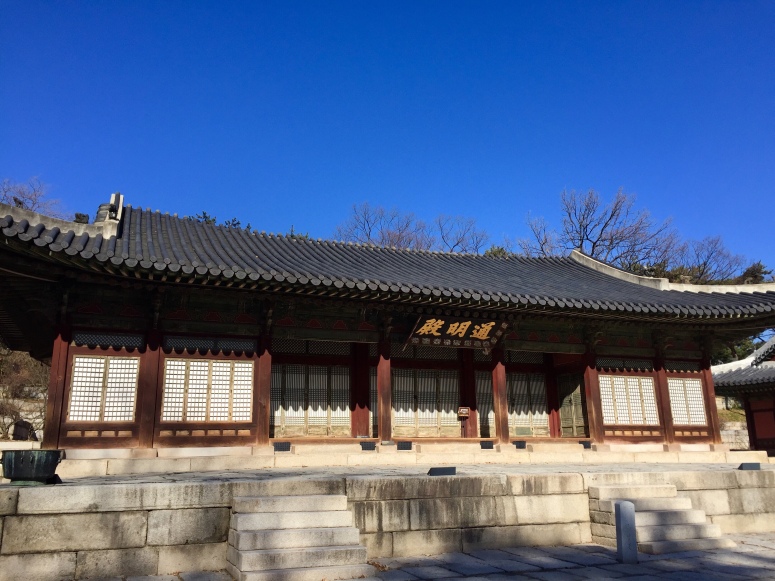 We decided to visit this palace after dark so that we could see it all lit up at night. I recommend this as it’s really pretty! This palace is surrounded by trees and sky scrapers from the city which is quite cool to have as the backdrop to the palace, giving a mix of old and new. This was sometimes the king’s residence (King Seonjo) as the other palaces had been destroyed by the Japanese. Back in the day it was 3 times larger than what we saw which would have been enormous!

Seoul has some beautiful palaces and I’m glad we were able to see them all. It’s cool that they’re just amongst the main city with it’s modern skyscrapers. It was a big part of our sightseeing in Seoul and I wouldn’t have had it any other way.