Our second day (11th December 2017) in Kyoto was spent exploring a very popular area of the city that conveniently was right next to our hostel (Santiago Guesthouse).

The main attraction in this area was a giant temple on top of the hill called Kiyomizu-dera. On our way to this temple we stopped off at a mausoleum called Nishi-Otani which included a walkway up to Kiyomizu-dera that had, on either side of it, one of the largest graveyards I’ve ever seen. The walk up the hill was also accompanied by various shrines making it a very scenic walk as well as very peaceful.

Once you reached the top of the hill and arrived at Kiyomizu-dera, you understood why it was such a popular tourist destination. You were greeted by a giant orange gate and an orange pagoda which towered over the rest of the complex. You could see this before entering the temple grounds and then paid 400¥ to go into the main complex. 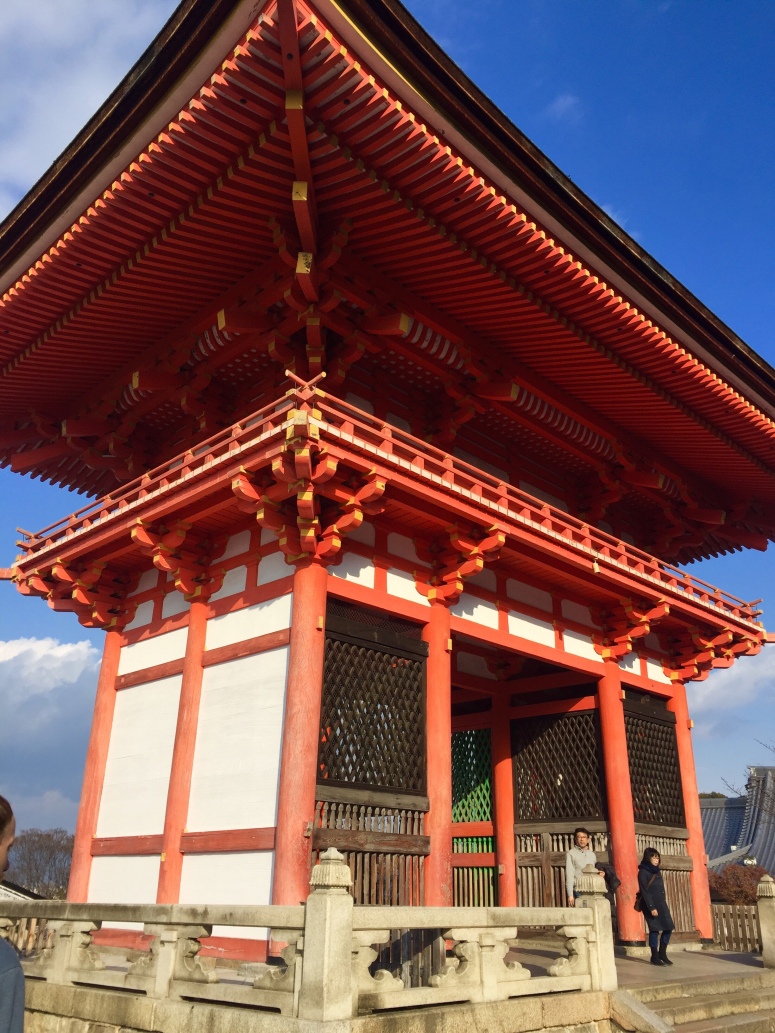 The main complex consisted of the main giant prayer hall which had a veranda that gave you great views over Kyoto. The hall was being restored at the time so was mainly covered up but the views were still just as good. 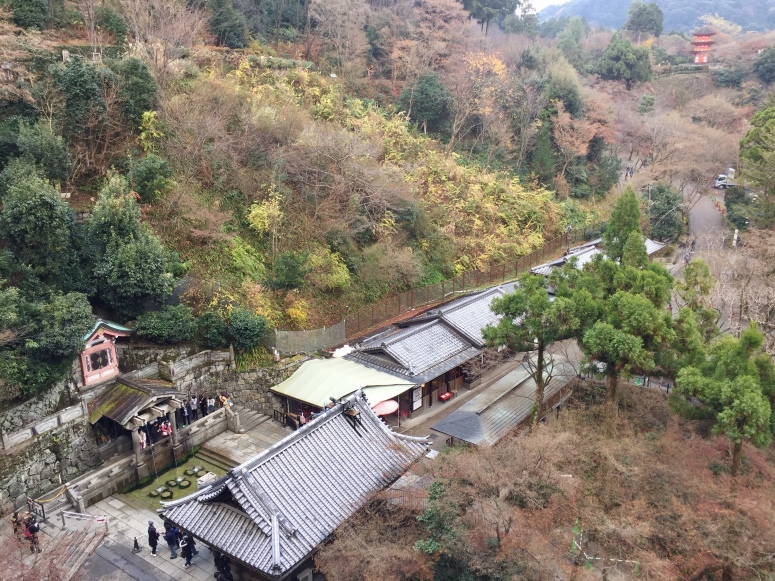 The temple also had big gardens you could explore which, despite the number of people, was quite peaceful. It’s definitely worth a visit whilst you’re in Kyoto.

As we were leaving we were stopped by three students on a trip from a school in the country who asked if they could speak to us for a bit. They had a note from their English teacher explaining that they didn’t get to practice their English that much and they had a work booklet with questions in for them to ask it. It was very sweet and they were really grateful to talk to us and gave us a gift of different origami as well as a written out envelope with their address on to ask if we would send them back a letter with a stamp from the UK on. We wouldn’t be back for a while but I’ve kept it all so that we can do it even if it is months later.

We had bought lunch from a supermarket – I had pumpkin croquettes (kabocha korroke) and Niall had chicken – so we ate that in a park in between temples. Buying food at the supermarket has been a good way to save money whilst still enjoying Japanese food and a lot of the supermarkets discount their fresh food after 8pm so we have been able to get some good food relatively cheap.

When we were walking down the Main Street from Kiyomizu-dera there were loads of shops selling traditional Japanese food and deserts aimed as souvenirs or gifts. The best bit about this was that Japan are very big on giving out free tasters and some of these shops gave out tonnes of samples so we got to try loads of foods that we wouldn’t have been able to try such as sugar coated nuts, flavoured biscuits and these mochi pancake type treats filled with different flavoured pastes. Everything was good except for a wasabai flavoured nut we accidentally tried! 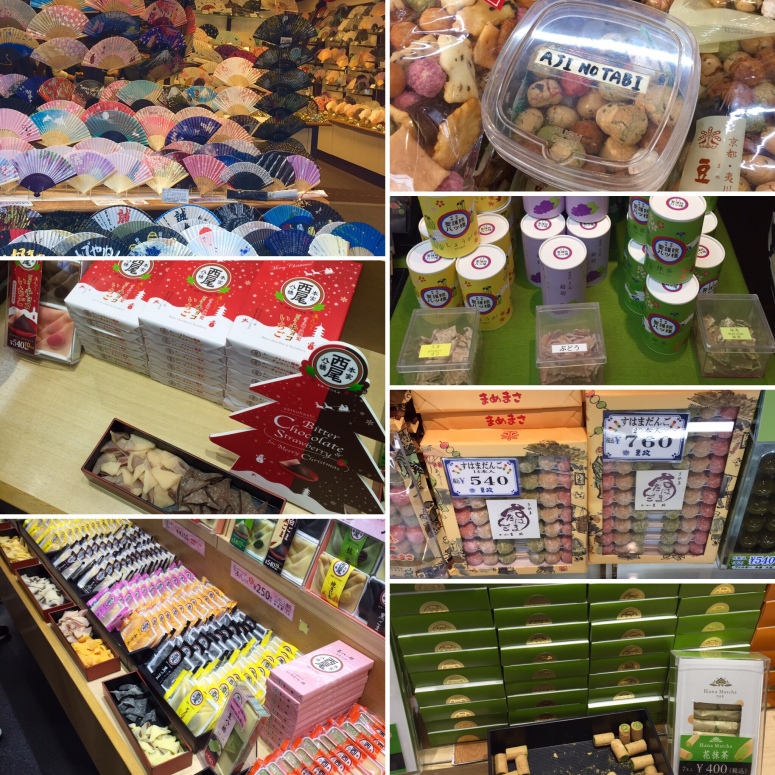 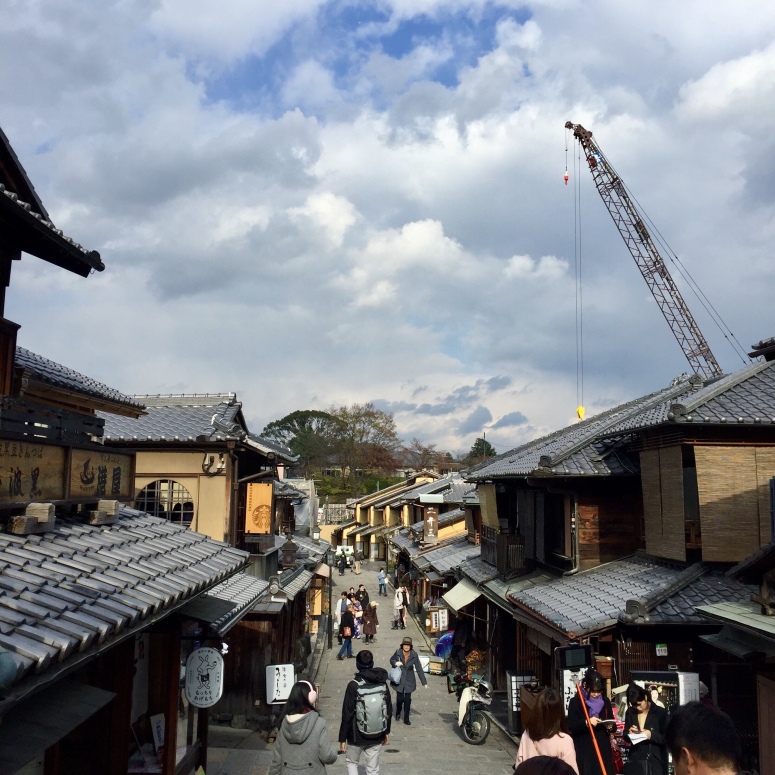 The rest of the day was spent walking from temple to temple in a small area of Kyoto that is a common route for tourists. It’s a very compact area with an awful lot of temples in it and a few of them you had to pay for entry meaning we didn’t go into them all. 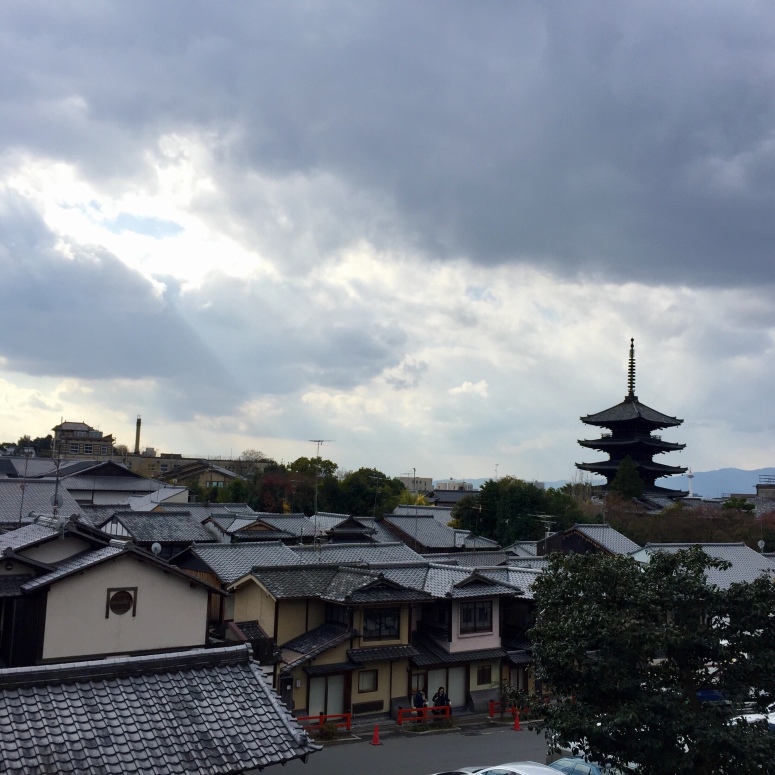 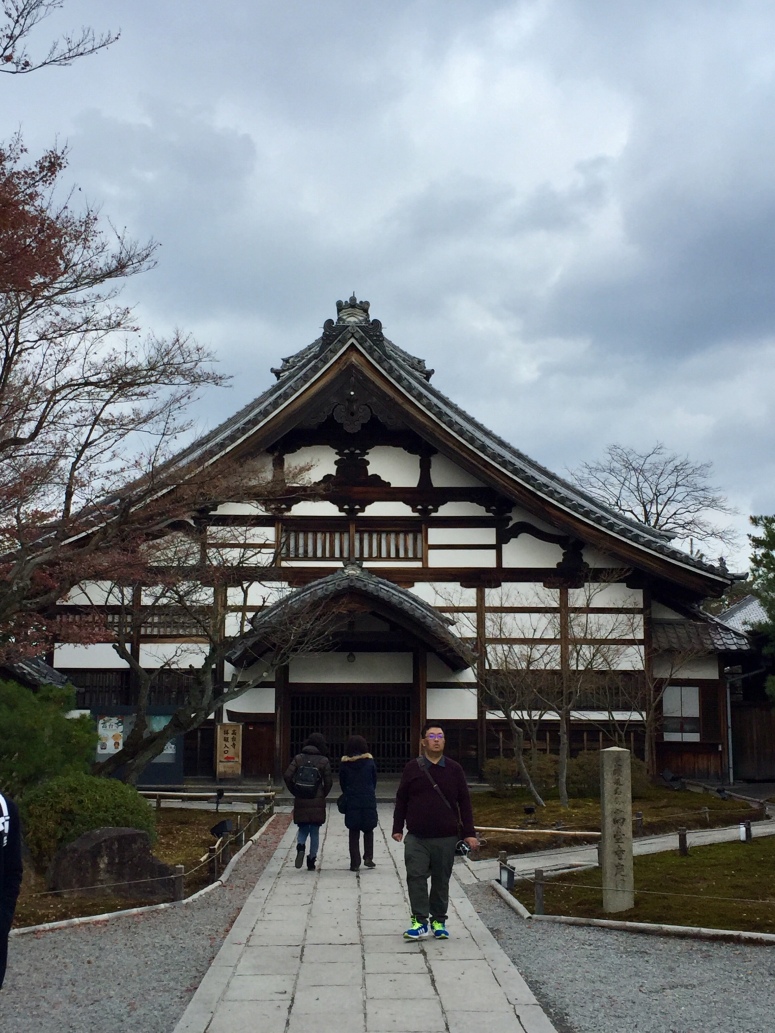 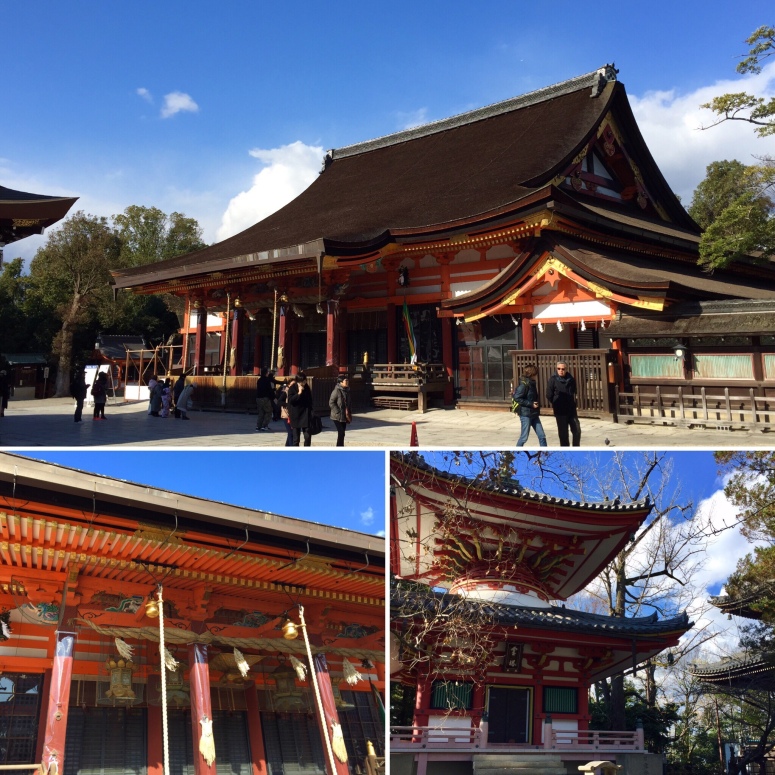 This is one of the most popular for Japanese people to take pilgrimages and to come and see. We didn’t go into it as we wanted to save money and they all cost to get in. 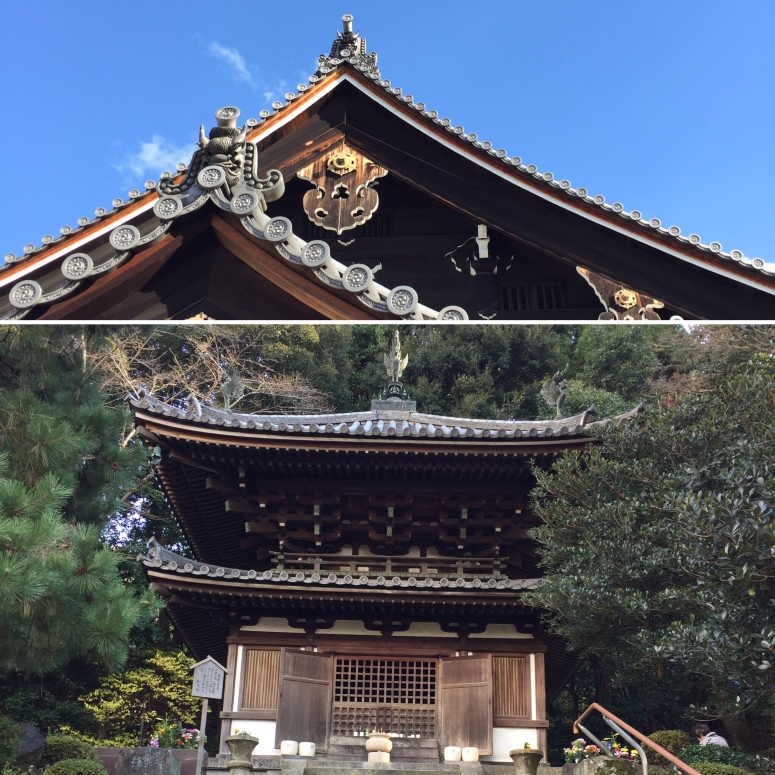 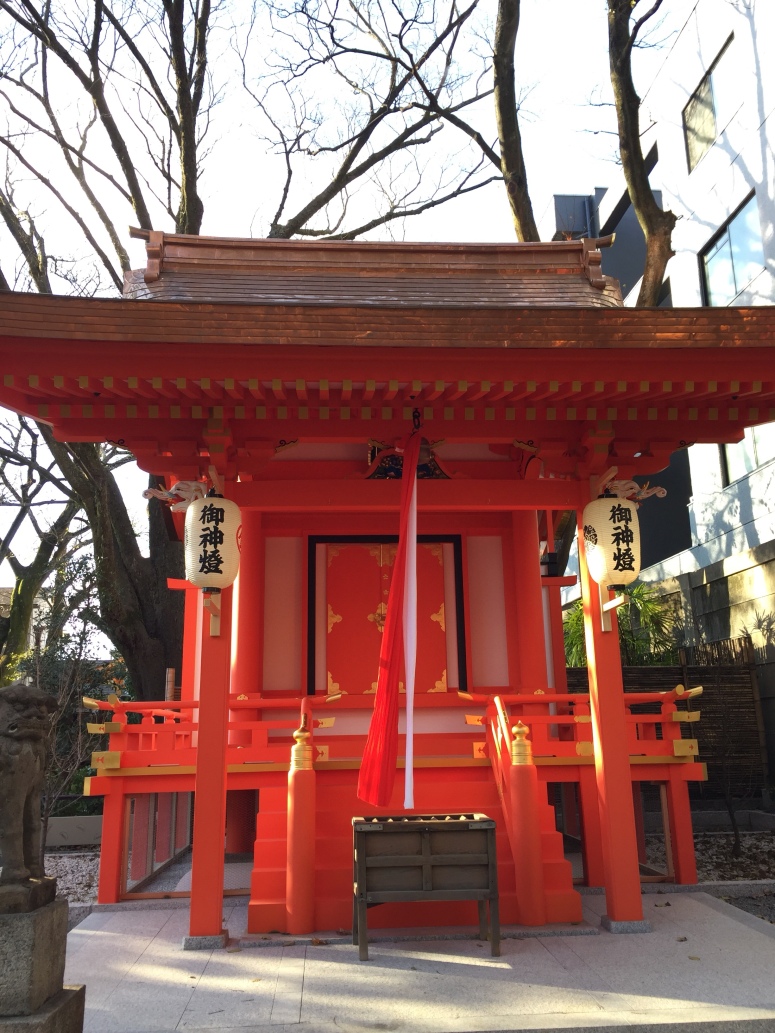 We visited this area a number of times in the hope of seeing the famous geisha’s who still work in the tea houses in the area. Geisha’s are women who are very skilled in a range of arts such as music and would traditionally entertain gentry in the tea houses through these art forms. Unfortunately, we weren’t lucky enough to catch a glimpse of a geisha whilst we were there but the streets are still nice to walk around and, if we had had more money, we could have paid for one of the ‘geisha tea house experiences’ that are geared for tourists.

Our tickets for Kiyomizu-dera lasted all day so we came back to the temple in the evening to see the sunset. It was good to see the full city lit up for the night especially with the pagoda silhouetted in our view. 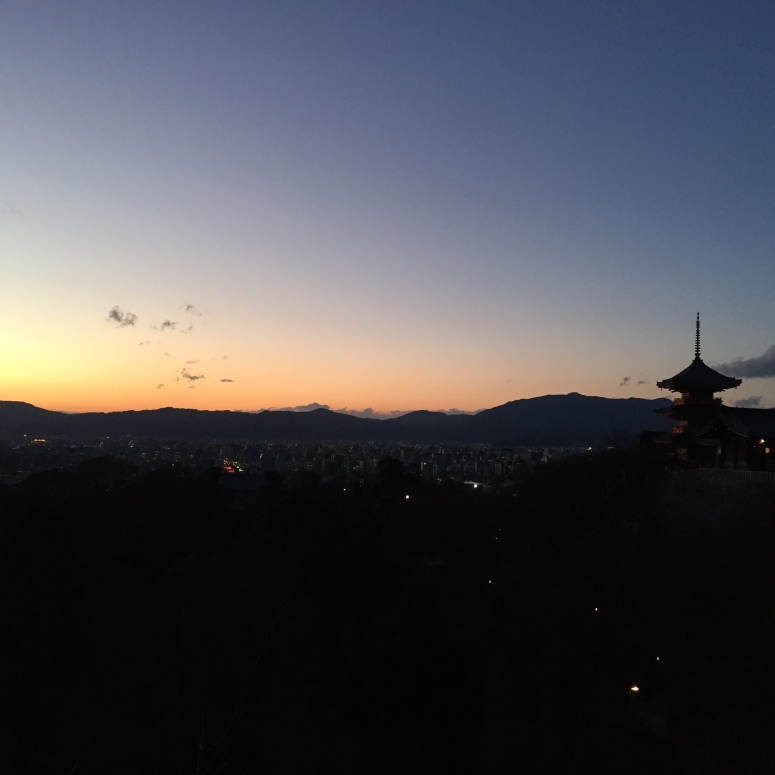 For tea I had tempura and fish and Niall had okonomiyaki which is a savoury pancake (the one he had was more like a potato patty) with meat and veg in it. This was again from the local supermarket.

It was another good day in Kyoto and I couldn’t believe how much there was still to see!