We arrived into Hong Kong on Friday 22nd December 2017 and had booked two different Air b’n’b’s on Hong Kong Island for our stay (one for over Christmas and one for New Years) which was a nice change from the hostels we had lived in for the entire year. We were exhausted from our night sleeping in Tokyo Airport (see last Tokyo post) and needed a bit of time to chill and relax as well as get a bit more of a plan together for the next few months.

Hong Kong is a former British colony that is now an autonomous territory of China. Those in Hong Kong have a fiercely independent identity and don’t see themselves as being from China. Apparently Hong Kong highly supports the freedom of speech (not always a very welcome thing in China) and protests here can happen regularly. Saying that, we didn’t see any protests during our stay here. It has apopulation of 7.4 million people and everywhere is skyscrapers or high rise buildings. This is a very densely populated area in a tiny space which puts the infrastructure of Hong Kong under increasing strain. For instance, they are running out of room for their landfill, they have clean water but old pipes that then make the water dirty so they still boil their water before drinking it and they all live in pretty small apartments in high rise buildings.

The Hong Kong skyline is iconic and was the main reason we came here to see the firework display over that skyline for New Years. Hong Kong is separated by the harbour and so you have Hong Kong Island and Kowloon which is on the mainland. As Hong Kong Island is the main area of Hong Kong, this is where we chose to stay during our time here so that we were relatively close to all of the main sites.

Even though Hong Kong as a whole doesn’t really celebrate Christmas, they decorate the whole city ready for it and they get the day off so I think it’s a pretty well liked holiday over there. It was so nice being somewhere that was all Christmassy seeing as it’s one of my favourite times of year and Christmas decorations are a big part of that!

On our first night we got the metro over the harbour to Tsim Sha Tsui in Kowloon which is the mainland section of Hong Kong to see the famous city skyline lit up at night. We found the best spot to see the entire skyline of Hong Kong Island is from the Convention Centre as this has a raised viewing platform that is unobstructed over the water whereas from other spots along the river here were cargo ships docked up which blocked the view. The view was so nice particularly as many of the buildings had Christmas signs and decorations on the fronts of their buildings. All of the colours reflecting into the water was my favourite bit. 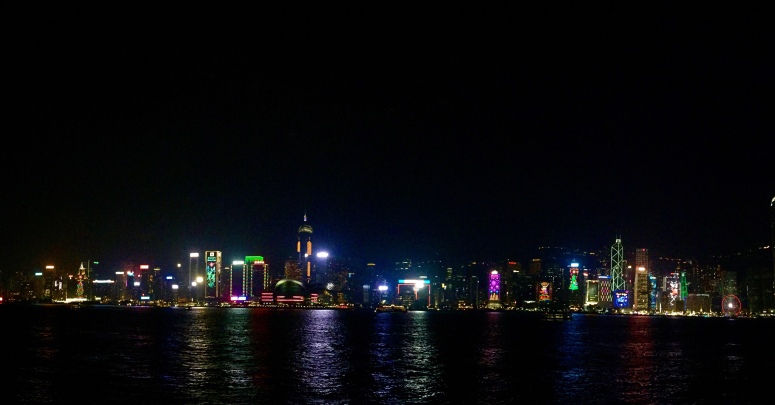 After our first evening in Kowloon , we returned a few more times during the day to get a better feel for the area. Kowloon has an enormous shopping district with high end shops like Cartier (possibly even two of these), Dior, Tiffany’s and Chanel. I love shopping and, if I ever had the money for a designer lifestyle, I’d be in shopping heaven here. Near to the river, there is a courtyard that has a giant tree in the middle of its grounds. This is the centre piece to a tiered shopping area that houses designer watches and jewellery stores and was decked out for Christmas. We visited here a couple of times during our stay and it really liked it here. It was also a good place to people watch and and we saw a number of wedding parties getting their photos taken here as well as a surprising number of people dressed up as Elsa from the Disney film Frozen. There must have been somewhere nearby offering some kind of Frozen princess experience as adults as well as children kept appearing in the costume for a photo shoot.

Every evening (as far as I’m aware) the Kowloon riverside hosts a light show. This isn’t like the ones we have seen in Singapore and Kuala Lumpur which involved fountains lit up on different colours (check out my Singapore posts for pictures of that light show – it was spectacular). This light show projected an animation onto a curved section of the convention centre which, whilst we were there, depicted Chinese dragons going through different worlds to find the numbers of the clock face so that time could begin again. I don’t know how often or even if they change the show but it was pleasant to watch although nothing exceptional. One thing that was very nice about watching the show was that the crowd were very responsive with lots of ooh’s and ahh’s which I found made it more fun.

The focus of the show appears to revolve around the clock face which is linking the show to the clock tower which is a popular landmark in the city. This is a 44m metre, red brick tower that is the only part left of the Kowloon train station that used to be on the site. I think you’re able to pay to go up the tower at certain times of the day which I imagine would boast great views of the harbour, skyline and shopping district. 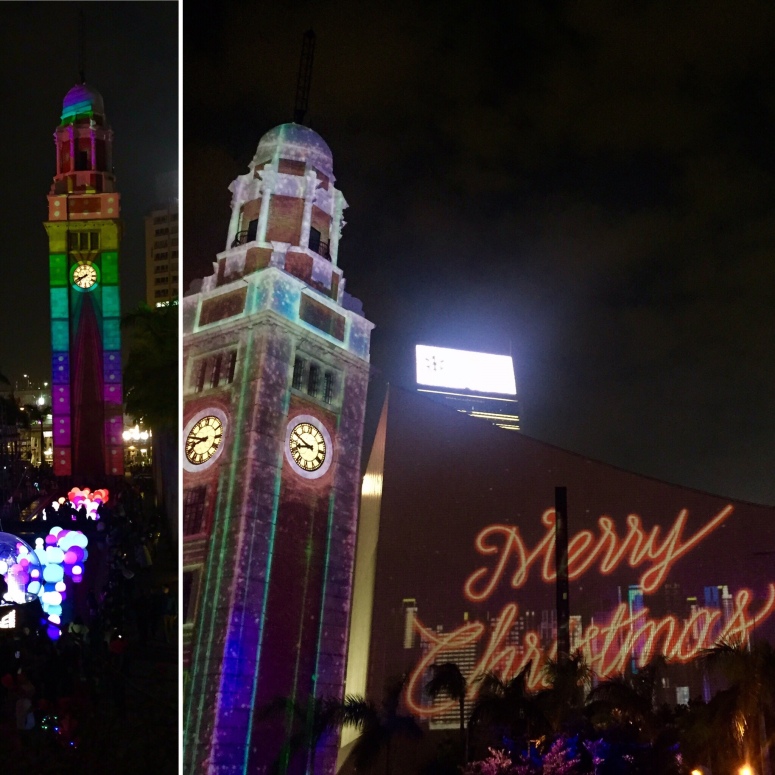 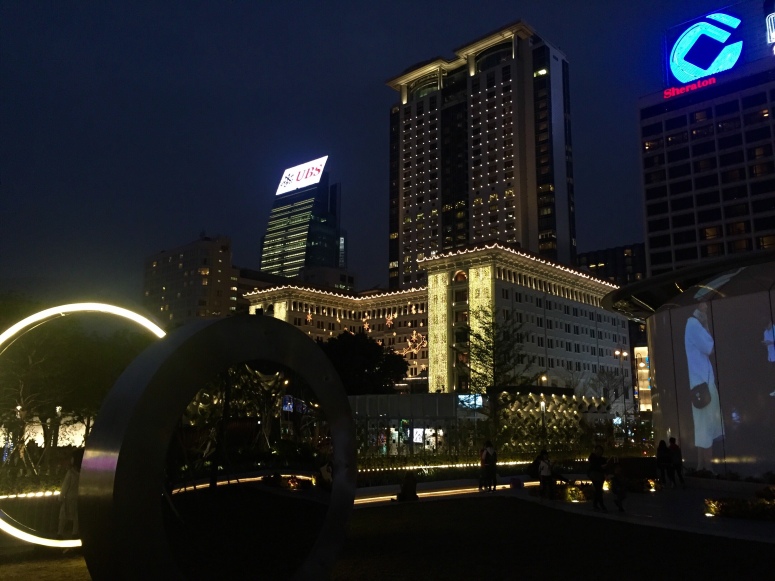 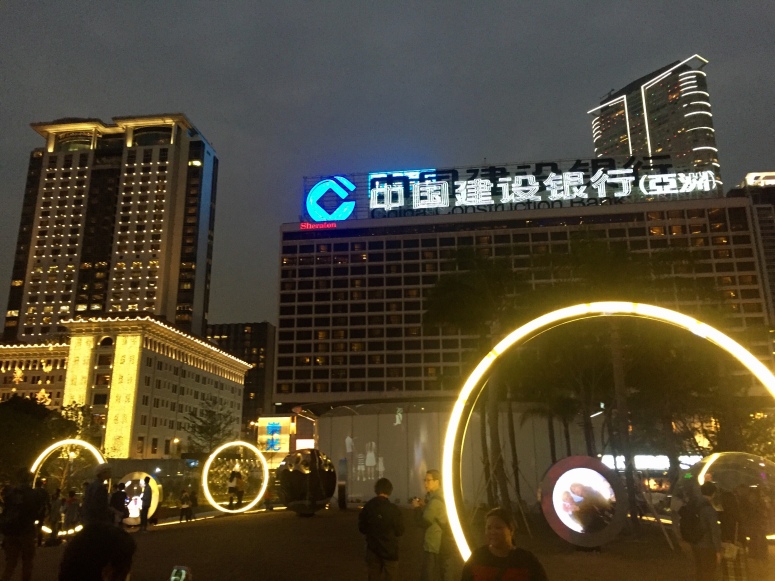 Something very unique to Hong Kong that makes for a more interesting night out is Club 7-Eleven. This is the colloquial name for 7-Eleven shops around Hong Kong where people go to drink alcohol whilst on a night out. There is nothing different about these 7-Eleven’s (a popular convenience store) than anywhere else in the world but it’s the alcohol laws that make Club 7-Eleven so popular to tourists and locals alike. Hong Kong have very relaxed laws meaning that you are able to drink on the streets pretty much everywhere. As with many places in Hong Kong, the main nightlight epicentre called Lan Kwai Fong is expensive and so Club 7-Eleven mean that people are able to subsidise their nights out with cheaper drinks whilst still enjoying the buzz of the clubs as people spill out onto the street. We went along to experience this for ourselves and it was great. Everyone from people in hoodies and jeans like us to high heels and little dresses were all together on the streets with drinks from 7-Eleven whilst you could hear the music from the clubs all around you. It was interesting reading up on Club 7-Eleven and the effects it has had on other businesses with there being mixed opinion on whether it’s helping or harming the nightlife industry. We paid under £1 for a can of beer each whilst a night out in Lan Kwai Fang can run into the hundreds of pounds due to the drink prices and entry fees. There are around 950 7-Eleven stores in Hong Kong which roughly works out to be one store for every half square mile which is a lot! Saying that, it’s not every 7-Eleven that is transforming into a club which is why we went the nightlife square of Lan Kwai Fong to maximise seeing the Club 7-Eleven party! 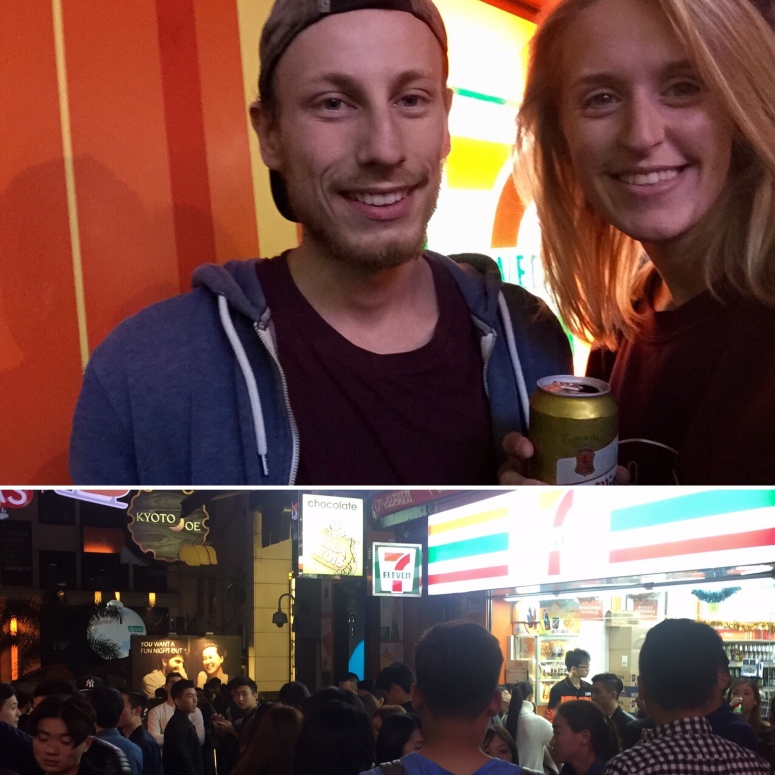 To get good views over all of Hong Kong, Victoria Peak is the place to go. It’s just over 500 metres above sea level and is the highest mountain on Hong Kong Island meaning you get to be above the many towering skyscrapers that make up the Hong Kong skyline. This is a major tourist attraction in the area and can be reached by either a cable car or a public bus. We chose the bus as it was a lot cheaper – we also had an Octopus card which is like an Oyster card which made getting all transport that bit more convenient. When you get to the top there are some restaurants, fast food places (both Burger King and McDonalds) and tourist attractions such as Madame Tussaud’s so you could probably spend a lot of time and money up here if you did all the activities on offer. When we were there it was very busy, most likely because it was a Sunday, but you were still able to find spots to escape the crowds and peacefully enjoy the view. There are different places at the top of the mountain that you can go to get different vantage points of the island and we were there on a beautifully clear day so the views were exceptional. 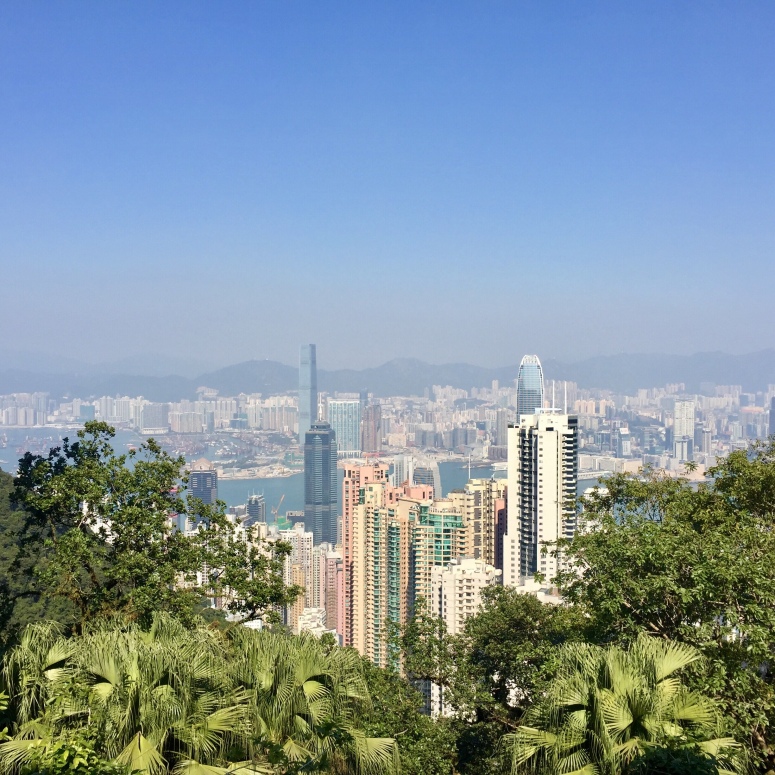 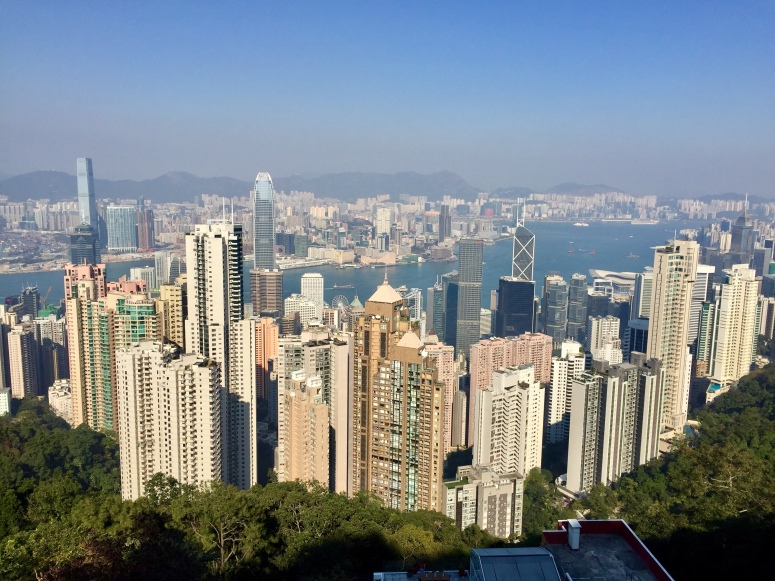 We wanted to make sure we got in a bit of culture too so headed to the Man Mo Temple. This was a little temple in a side street in Hong Kong and had gold doors, giant incense coils and lanterns hanging from the ceiling. It’s he oldest, most prestigious temple in Hong Kong. 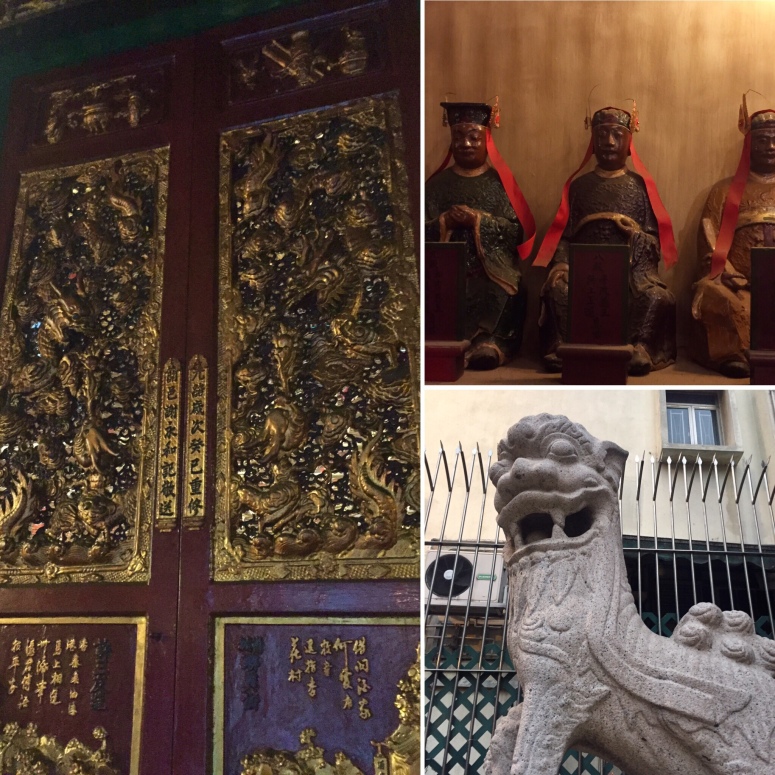 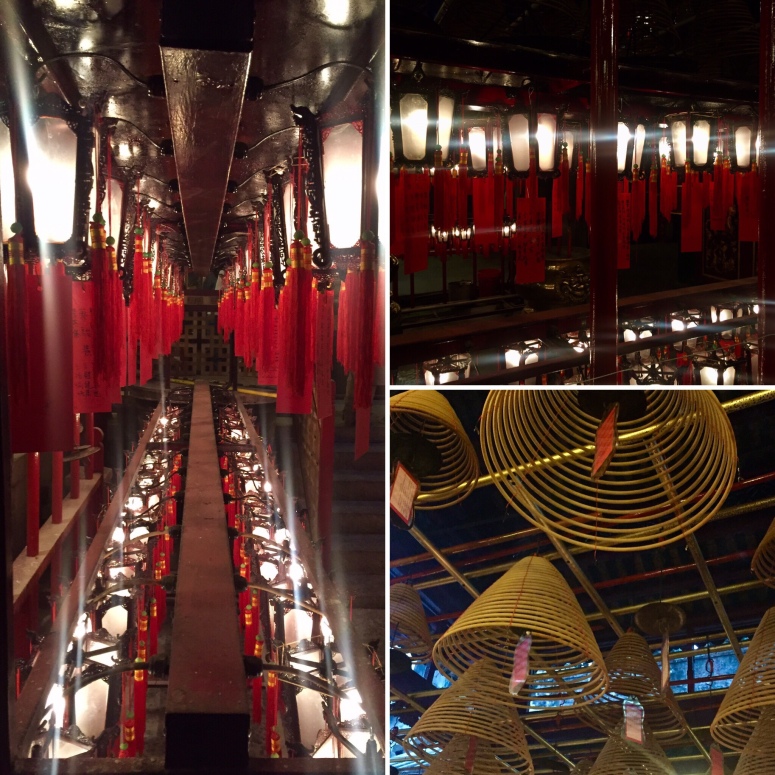 So far, Hong Kong was coming off well and we were enjoying our time exploring here.