On Friday 29th December 2017, we took the ferry from Hong Kong Island to Macau. We had originally planned to go the day before but when we went to book our tickets for the ferry in the morning the next available ferry wasn’t until midday which we didn’t think would give us long enough in Macau. We had found a deal for the ferry tickets on Klook and they could only be used on weekdays so we booked our tickets for the next day. So if you’re going to Macau, make sure to go and confirm your place on a ferry a couple of days before!

Our ferry left at 9:15am and arrived at around 10:30am. We had to bring out passports and go through border control both to get out of Hong Kong and into Macau on the other side. After learning from our mistakes, we immediately booked our return ferry to Hong Kong so that we didn’t get caught out with them all being booked up. It was now time to head to the casinos!

Macau is a special administrative region of China, similar to Hong Kong. Gambling in Macau was made legal in the 1850s when Portugal used to own and govern the area. Even after it was given to China, they maintained the gambling laws and Macau became the only place in China that you can legally gamble in casinos. The main visitors to the casinos here are Chinese nationals and those from Hong Kong and in 2007 it overtook the Las Vegas Strip in the amount of gambling revenues it receives, making it the biggest place for gambling in the world! For this reason Macau is often referred to as the ‘gambling capital of the world‘. Despite this, Macau is continually under threat form China to restrict gambling laws and take back some of the autonomy the area has. There are constantly new developments such as luxury hotels under way here and this is apparently a bid to prepare for if the Chinese government changes the gambling laws here – I guess only time will tell if that ever happens.

Niall had read quite a bit on casinos and the rules and tricks they have to keep you gambling for days. For instance, they never have any windows or any clocks. Casinos run on their own time and they don’t want you to see that when you came it was light and now it’s dark to decide to call it a day! It’s a very surreal environment to walk around (we didn’t have it on our budget to actually gamble) and it would be so interesting to be in one of these casinos in the evening or on a weekend when it’s packed full of people. To get into the casino itself we always had to show our passport to prove our age as nearly all of the casinos are also hotels and shopping centres which are designed so that you would never have to leave your building to get all of your needs met for your stay.

As with the Venetian in Las Vegas (that I’ve gathered from seeing pictures as I’ve never been – yet) there is a mini-Venice inside the hotel and shopping section of the building. Here there are bright blue skies with small fluffy clouds and bright lights to make it look like a sunny day. There was a string quartet playing when we were there and you can also get gondola rides on the small ‘canal’ that runs through the centre. The detail was very good and, having been to Venice twice, it did look similar (as much as a fake Venice can) to the real thing. 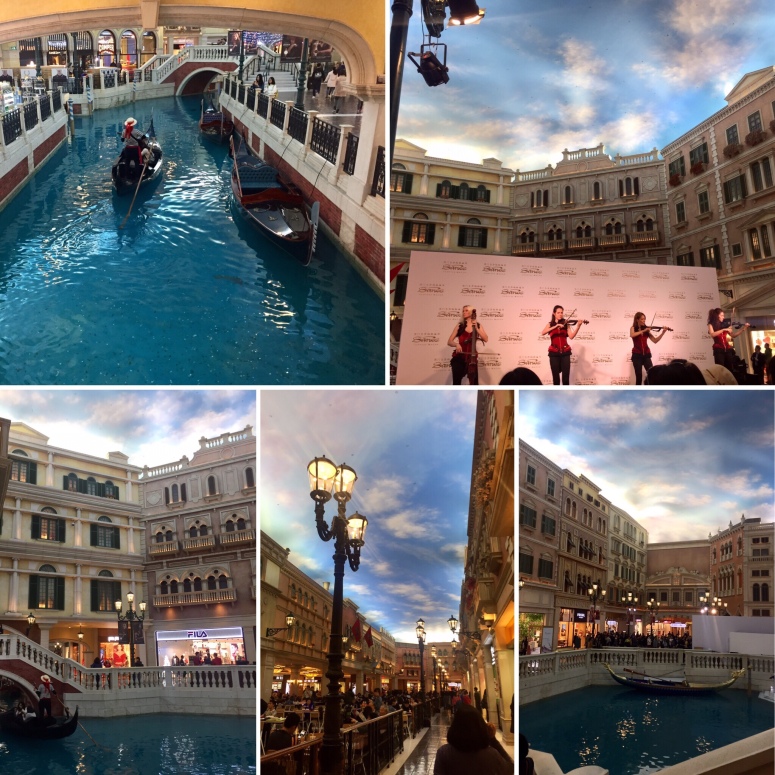 Next we headed to the Sands Macau casino which was closer to the main city and completely gold. The Sands Macau is owned by the Las Vegas Sands Corporation and is also a hotel. I read that the chairman of Sands said that their business would likely soon be a Chinese enterprise and that with Macau taking over Las Vegas, they should call Vegas ‘America’s Macau’. I find this interesting as I still associate gambling with Las Vegas and knew pretty much nothing about Macau before coming here. I know I’m not a gambler so that’s probably why but I guess it also has a lot to do with the heavy portrayal that Las Vegas gets in TV and movies. The inside of the casino and hotel was dark wood and there was an enormous chandelier hanging the full length of the casino. You’re not meant to take pictures inside the casino but I was able to get my pictures before they came and told me off (for the record I didn’t know I wasn’t allowed to take a picture of it). Apart from the elaborate chandelier, this was probably one of the more understated casinos and didn’t have an outlandish theme or anything. It seemed a lot more likely to house locals and more low key patrons compared to the likes of the Venetian or Parisian, where we went next.

Also owned by the Sands Corporation is The Parisian Macau. This meant we were able to get a free shuttle between the two which was very handy because they weren’t close together at all. The biggest thing about this casino is the half-size Eiffel Tower that’s outside the main entrance as well as their being a mini Notre Dame. Inside had fancy decor and the casino was huge. This casino also seemed to have more security cameras than any of the other. I don’t think if this was actually the case or if it just seemed that way from the designs painted on the ceiling but either way Big Brother would definitely be watching your every move as the ceiling was covered in cameras. 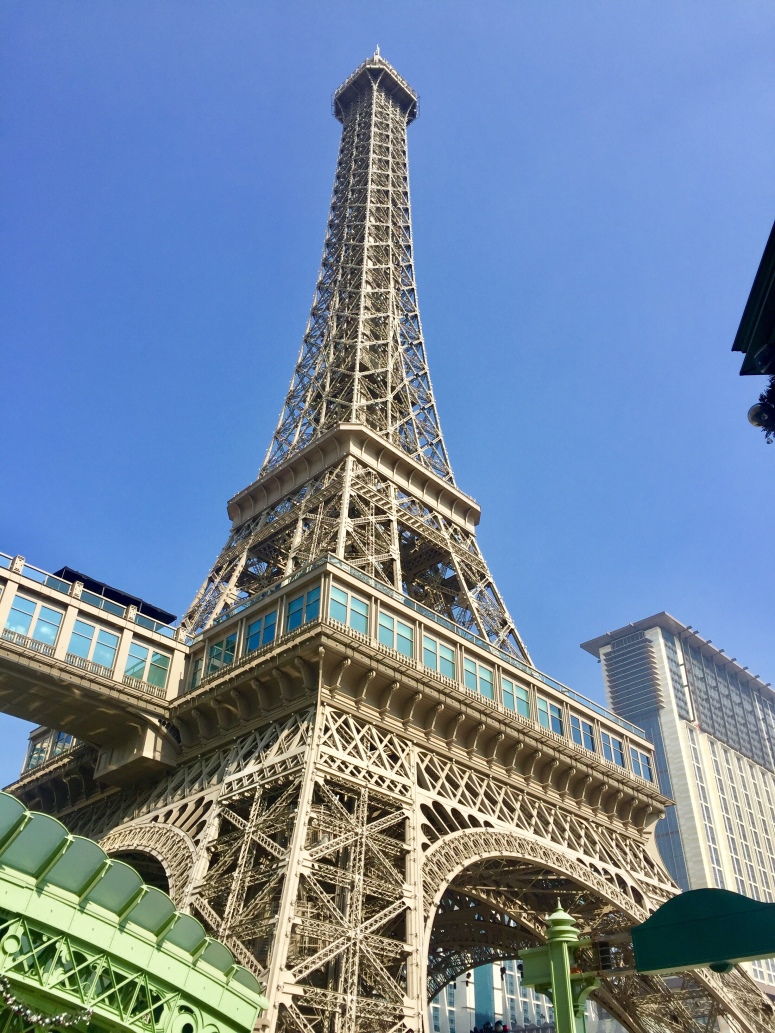 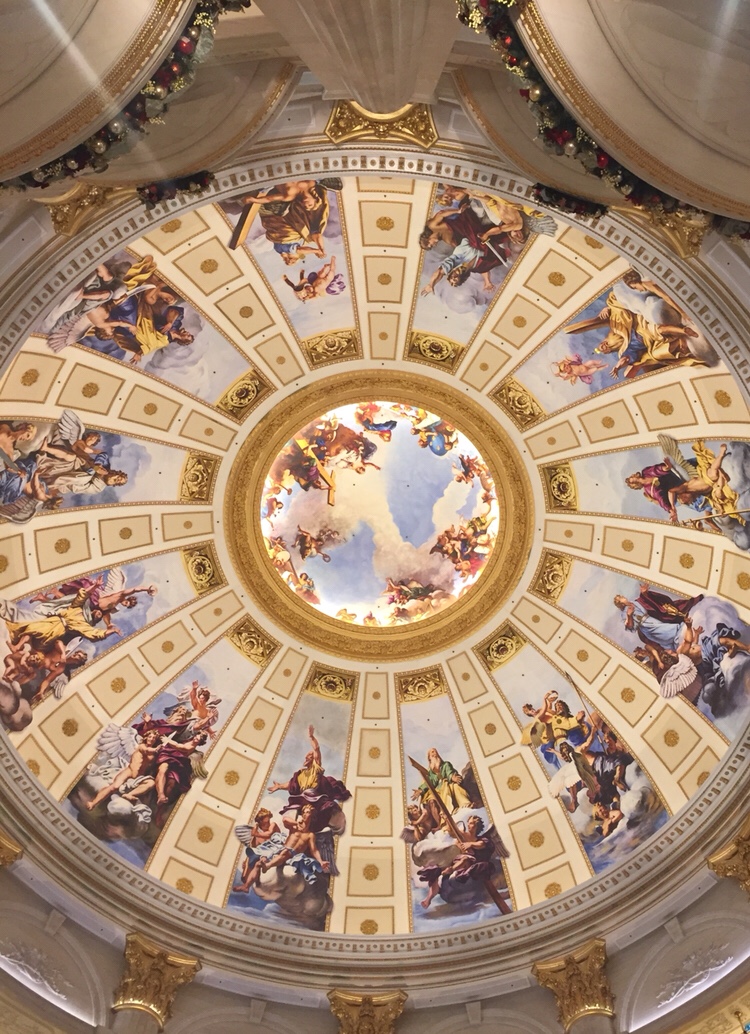 Our final casino of the day was to Studio City. This is probably the most family friendly of the casinos we visited as it had lots of restaurants as well as a ballroom, cinema and even 4D ride about Batman. The whole place was designed to be like old New York Streets and the focus was on everything to do with films and the stars. 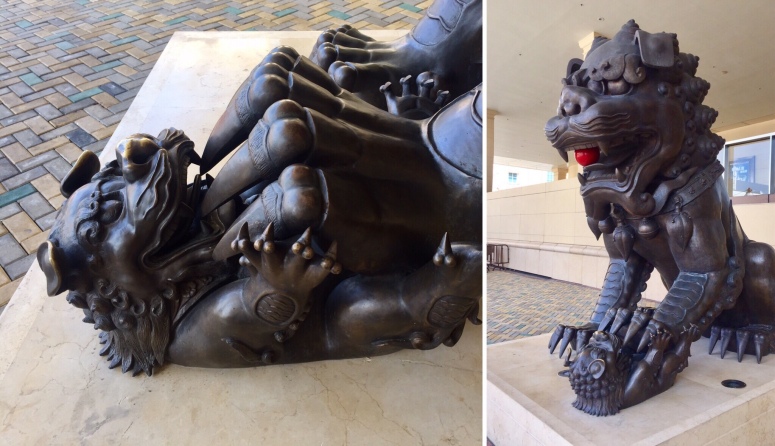 After exploring the casinos we had a little bit of time to have a look around the city before we had to get the ferry back to Hong Kong. As Macau used to be a Portuguese colony, the architecture heavily displays this and many of the buildings were painted bright colours to reflect this which looked lovely. We went to the Jardin de S. Francisco which was a cute little park in between some high rise buildings and walked through towered apartment blocks that showed just how densely packed Macau was. 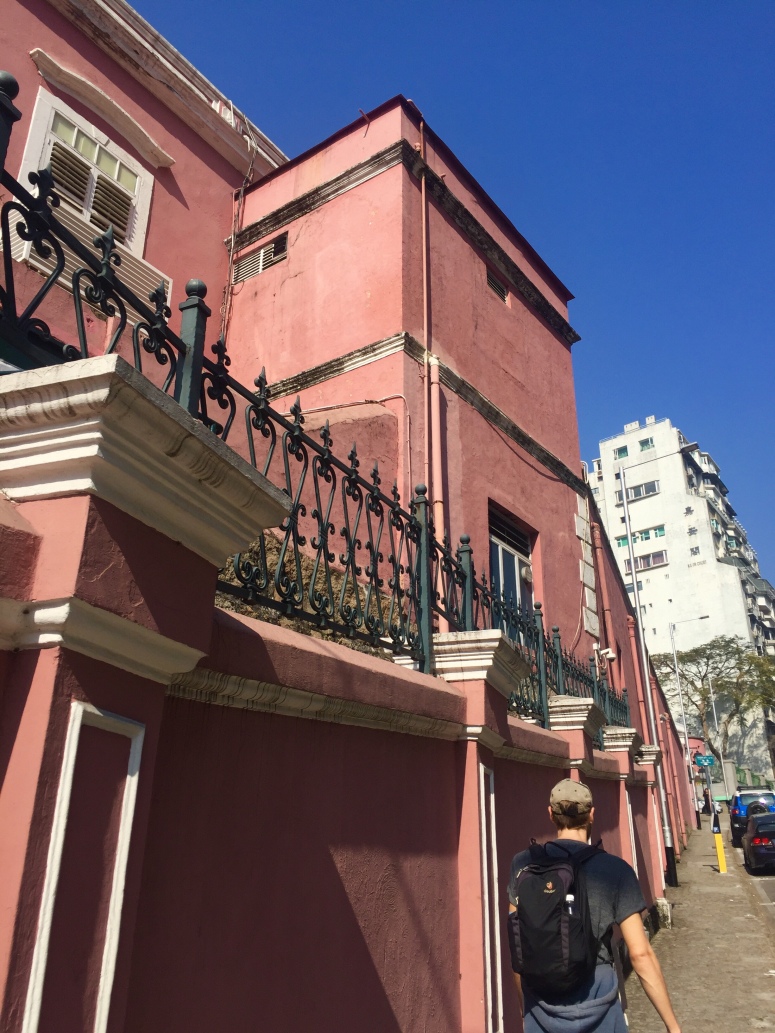 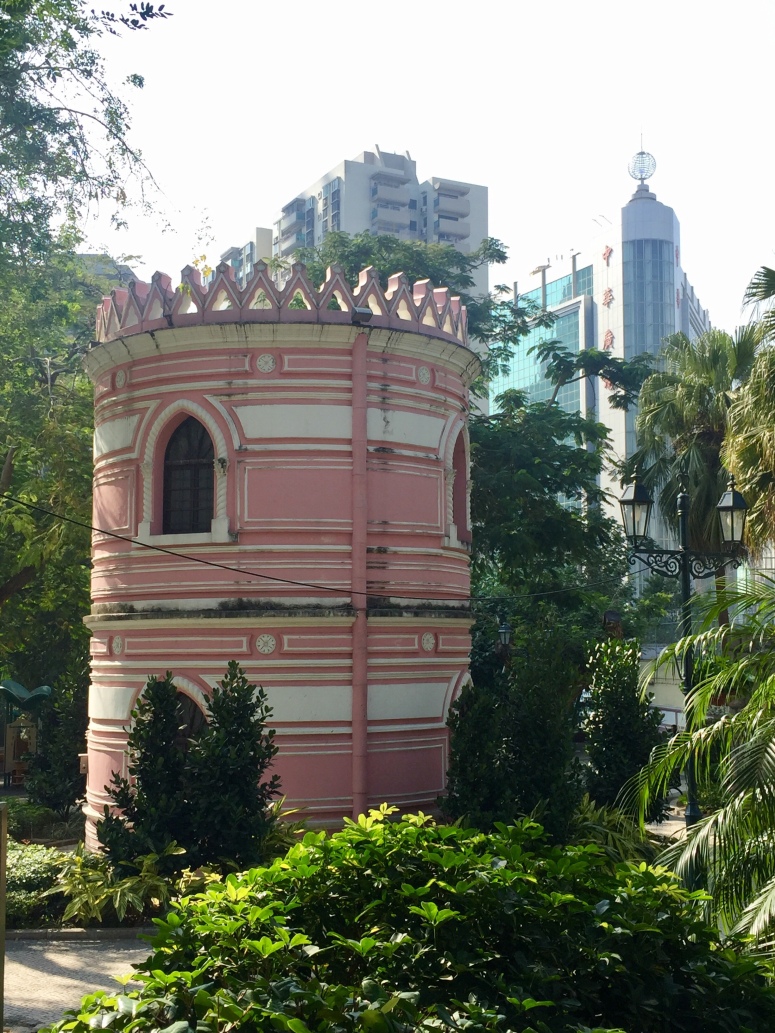 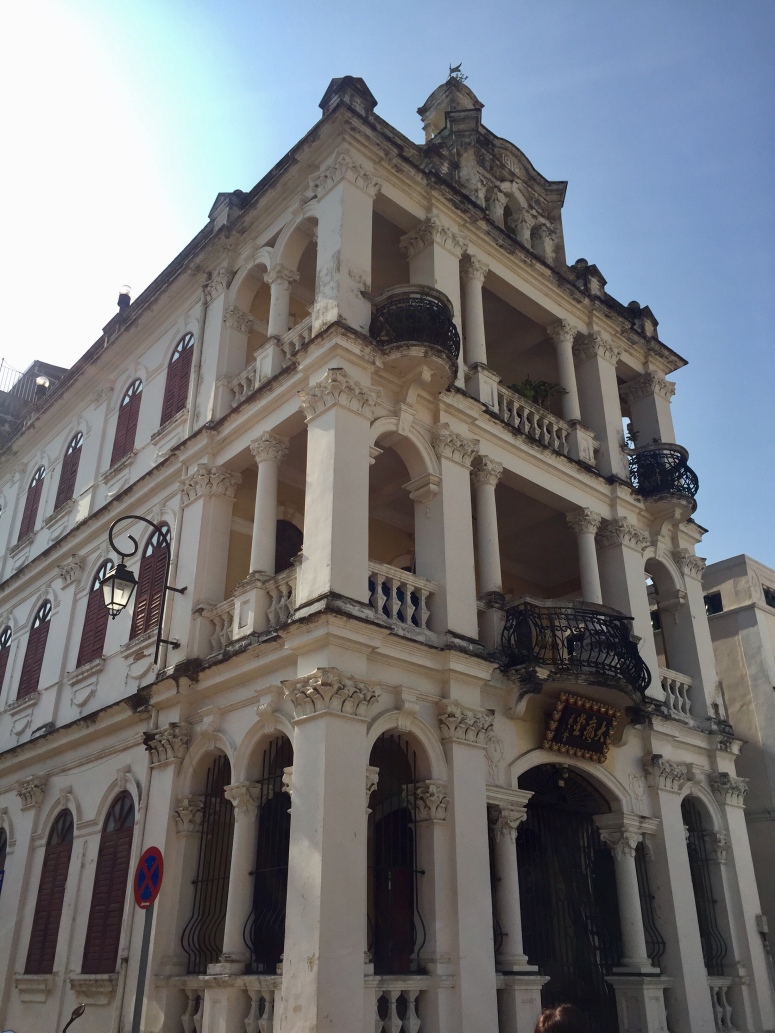 We enjoyed our day in Macau and just wish we’d been able to have a bit longer but I guess that’s just how it works and we got to see the main casinos which was the main reason we came! I had never been in casinos like the ones in Macau and we were often amazed by some of the minimum prices at the betting tables we passed. It’s remarkable the amount of money that must be made or lost at the table and I have to say I’m glad we didn’t chance our luck and have a go at betting ourselves!