On Tuesday 6th February 2018 we got a tuk tuk at 5am to get to Siem Reap Airport for our flight to Phuket (pronounced Pooket) in Southern Thailand. We had decided to fly directly to Phuket instead of to Bangkok to avoid the long days of travel it would take to get to the island so that we could maximise our time in the sun. Despite it being an international flight and so having to be there three hours before departure, they didn’t actually let us check in until one and a half hours before departure meaning it was an extra hour we could have had in bed!

At around 11am we arrived in Phuket and got on a mini bus that would take us from the airport to the main beach area on the island, Patong. We were staying at Patong Backpacker Hostel and were paying around four times the price we had been paying in Vietnam and Cambodia but I guess that’s what happens when you go to a very popular holiday destination! The hostel wasn’t bad though despite being one of the cheapest we could find and had a good location and was clean with intermittently decent wifi. We couldn’t check in straight away so went to find some lunch. Our first impression of Phuket and Thailand was that it was expensive compared to the other parts of South East Asia we had visited. Luckily, we had heard loads about the toasties at 7-Eleven in Thailand and so went there to try get some cheap food. For less than £1 we got a toastie each, mine was cheese and Niall’s was ham and cheese – they were good! We had originally thought to go to McDonald’s as we hadn’t had anything but noodles in a while but it would have cost us more than at home for a McDonald’s meal so we just weren’t going to do it! We also had never seen so many fast food places all in one place with our street alone having four McDonald’s, two Burger Kings and a KFC all a few doors down from one another.

I have never been on a party holiday but Niall has been on quite a few and he says that Patong is very similar to places like Magaluf and Malia. Lots of bars and restaurants on a street right next to the beach and then a main strip for your nightlife where you would go in the evening. I don’t think either of us had known what to expect with Phuket or the Thai islands in general but it was definitely a surprise what the place was like and I didn’t even feel like I was in Thailand at all.

Phuket is the first place we have really been in Asia that is full of more holiday makers than backpackers and so the range of people here from different ages, groups or families is the biggest we’ve had. You can also tell that this place is aiming at those holiday makers and not backpackers and we haven’t been the only people to mention that it’s not really a good place to stick to a budget! 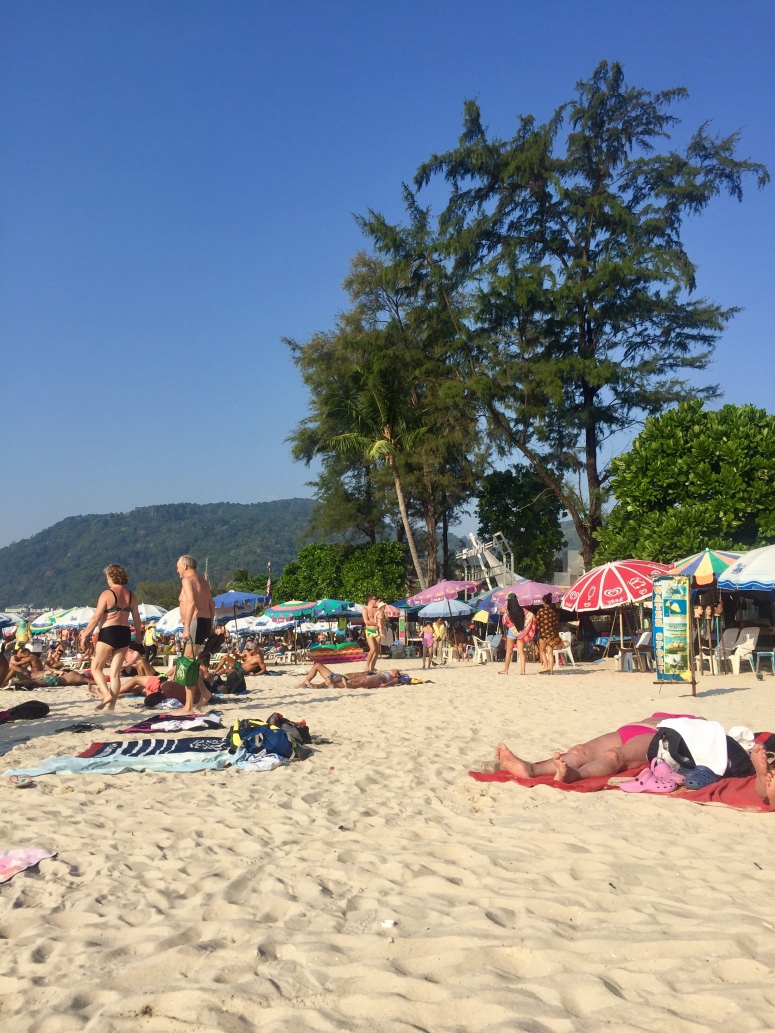 The beach was nice with relatively calm water and white sands. It was packed full of people but we were able to find a spot to sunbathe easily. On the beach you can go parasailing or on a jet ski and there are a lot of sellers walking up and down the beach to sell drinks, henna tattoos, sunglasses, tanning oil and wood carvings.

We relaxed here until sunset which was pretty over the clear, cloudless sky. It had been a beautiful, sunny day and after our 4am start it was nice to have done nothing since we arrived.

In the evening we headed to Bangla Walking Street which is the main drag in Patong and is one of the most surreal places I have ever been to. Aside from kebab shops and tattoo parlours there are a lot of bars all with girls in their underwear dancing next to a pole. Dancing is probably too energetic a word for what they were doing as it was more stepping from side to side which made it seem stranger than if there was actually pole dancing happening. The streets were very crowded and every few steps we were accosted by someone wanting to tell us about their happy hour or about a sex show we could go and see. This is one of the big businesses in Patong particular the ping pong show. This show, without trying to sound crude, is where ladies shoot different objects out of their privates. I have no idea how they do this (nor have I dared looked into it – I’m happy to have the ignorance on this one) but it’s the big sell of a lot of the touts on Bangla Street. We were given a one minute free look and did in fact see a Thai lady shoot what looked like a badminton shuttlecock in the air and then a tourist caught it. Why you’d want to be the one catching it I don’t know! 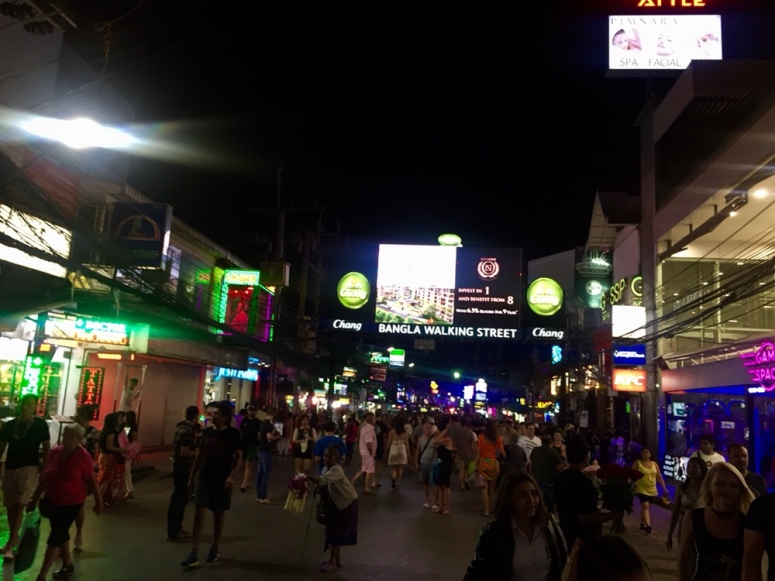 We found a street market along Bangla road that did a lot of Thai food and we bought Pad Thai and noodles for 100 Thai baht each (£2.30). The portions were enormous and it was very tasty, I even had to bring some back to the hostel with me as I couldn’t finish it all! The market is the perfect place to go in Patong to experience proper Thai food and with the portion sizes we didn’t mind paying 100 baht (we later said that we could have happily shared one plate as it was so much food). Later we met up with Keven and Jamie, our Canadian friends who we met in Vietnam. They told us that food is cheaper on other islands and even cheaper in the north which was reassuring! We had all had an early start that day so decided to properly experience the Patong nightlife the following evening instead. 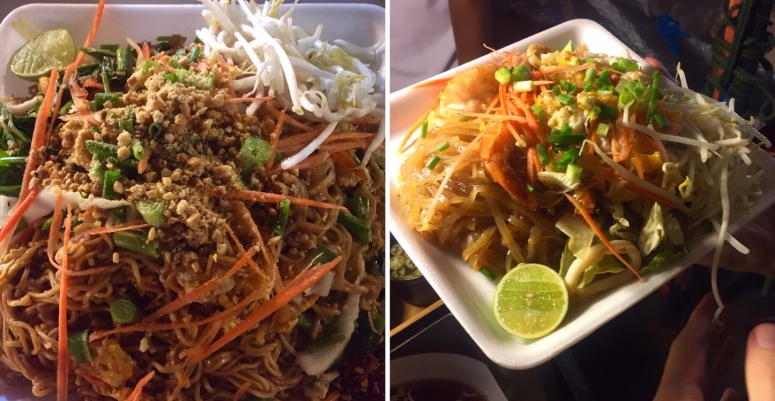 So far, we liked Patong. I don’t think it’s somewhere I’d want to be for a more than a couple of days but I enjoyed how busy, extravagant and crazy the place was. Maybe that’s because I’ve not seen anything like it before though. I can understand why people come on holiday here and I understand that when I’m saying it’s not cheap I’m talking in relation to the places I’ve just come from and that most things are still cheap if you’re out for a two week bender with your mates.

We spent our second day in Phuket sunbathing on the beach in 31 degree heat with Keven, Jamie and Ryan whose girlfriend, Maddy, had joined them on their trip. It was nice to all chill together and catch up with them as we have both been to Cambodia and they have been to the south eastern Thai island’s since we last met up.

After a day of sunbathing we all met up for a night out. As Phuket was expensive (for us anyway) we chose to save money and buy drinks from 7-Eleven before heading out. The Canadians had met two Australian girls, Charlotte and McKenzie, when they went to the Full Moon earlier in the month and they were in Patong at the same time as us so we all went back to their hostel (which was more like a hotel) to pre-drink. Niall and I tried to go for the cheapest beer we could which was also 8% so we saw this as a win all around. It tasted horrible and we then googled it to find out it was actually rice beer (beer used loosely as it’s not recognised as a beer outside of Asia). Niall managed to drink it all but I ended up giving mine away as it was a struggle. After heading to a few bars Niall, Ryan and Maddy

ended up going home and I went to a club with Keven, Charlotte, McKenzie and Jamie. The club was huge and packed and I had a really fun night. 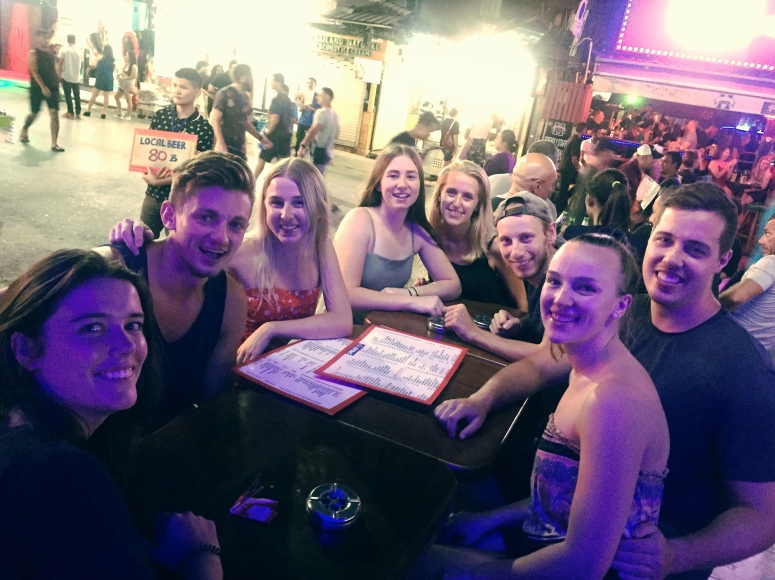 From left to right: Jamie, Keven, Charlotte, McKenzie, me, Niall, Maddy and Ryan 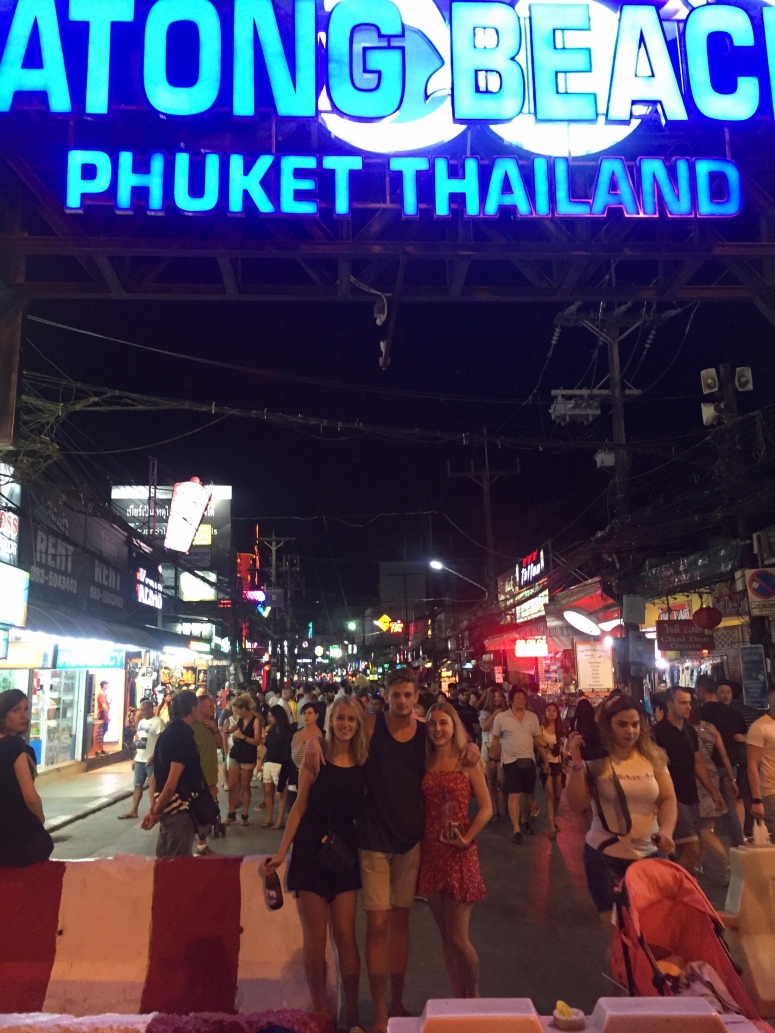 Phuket was a really fun place to spend a few days and also quite a surreal place when you’re coming from other places in Asia. The western influence from all the holiday makers is overwhelming but if you’re up for a messy night out, parties and sunbathing then this ticks all of the boxes for you. Plus, it’s near to a lot of the other islands so it was perfect for us to start our island hopping over the next few weeks.