On Tuesday 13th February 2018 we got a bus at 11:40am to take us to Ao Nang in the Krabi Province on the mainland of Thailand. The bus cost 400 baht (£9.15) and, as we had come to expect in Asia, didn’t actually get out of town and on our way until 12:30. Ao Nang is one of the main beach areas in Krabi and we had been told that was the best place to stay compared to Krabi Town. Once we got going the journey was uneventful although slightly cramped and we made it to Krabi Town at 2:40pm where we then changed onto a different minibus to go to Ao Nang, arriving at 3:30pm.

We were staying at Sleeper Hostel which was on the Main Street in town and seemed very new. It was probably one of the nicest hostels we’ve ever stayed in because of how new the facilities were and we were actually able to have a genuinely hot shower like you’d have at home which was a luxury for us, which made me never want to leave! We spent three days in Ao Nang with our first day being more of a travel day and we were looking forward to doing nothing but sit on a beach particularly as we had had some busy days and I had just got my strength back from being ill.

On the rest of our arrival day in Ao Nang we had a walk around to get our bearings and check out the beach. Ao Nang is quite a popular tourist destination and is seen as a family friendly Phuket so there was a lot of people here as well as loads of restaurants and shops. The beach ran along the bottom of the main road and along the coastline there are also enormous limestone cliffs like the ones we saw in the Philippines and they were spectacular particularly as they towered over the beach and overlooked the main road. We were able to walk along a path that followed the cliff to the edge of the beach which was a more scenic route than through town. 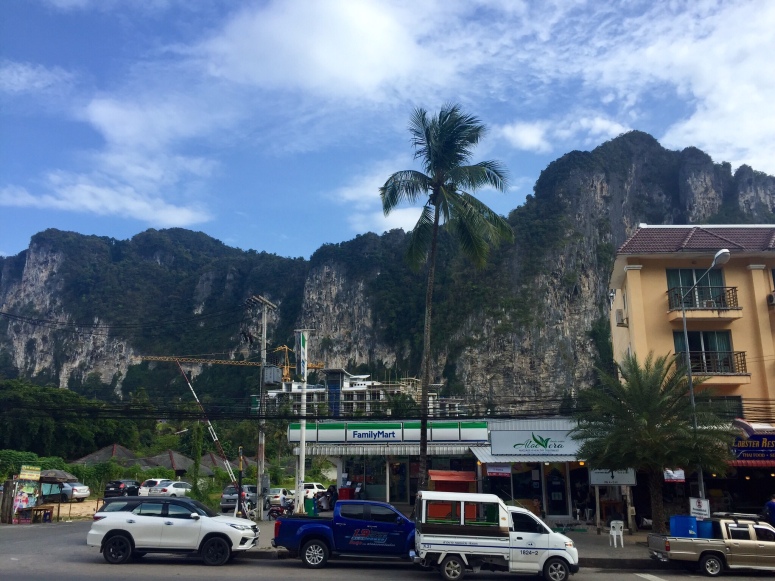 After a relaxing evening – all of our evenings were blissfully chilled in Ao Nang – we headed to the beach for a day of sunbathing. I’m sure you’re sensing a theme with a lot of our activities in Southern Thailand but I want to assure you that we are sun safe and vigilant with suncream (we have an enormous one litre bottle of the stuff – factor 50!)

The beach wasn’t the nicest we had been on as lots of leaves fell off the trees onto the sand and the water wasn’t very clean with a slight sheen from oil from all the boats on the surface of the water. We steered clear of some areas as it didn’t smell great but, once you found a a nice spot you forgot all of those things and could relax.

On the left end of the beach (if you’re looking out to sea) there is a wooden walkway and some stairs that leads out over some rocks that stick out over the sea and takes you to a national park beach that is also the beach to a resort. Niall found it when he went on a walk along the beach and we moved their for the rest of the day. This beach was infinitely nicer and there was also a lot less people on it (the other beach had been very busy). My favourite thing about this beach was looking back at the beach from the water and being faced with the giant limestone cliffs on all sides like a huge wall to a private, sandy garden. It was stunning and I’m so glad Niall found the beach as it made our time here a lot more enjoyable. 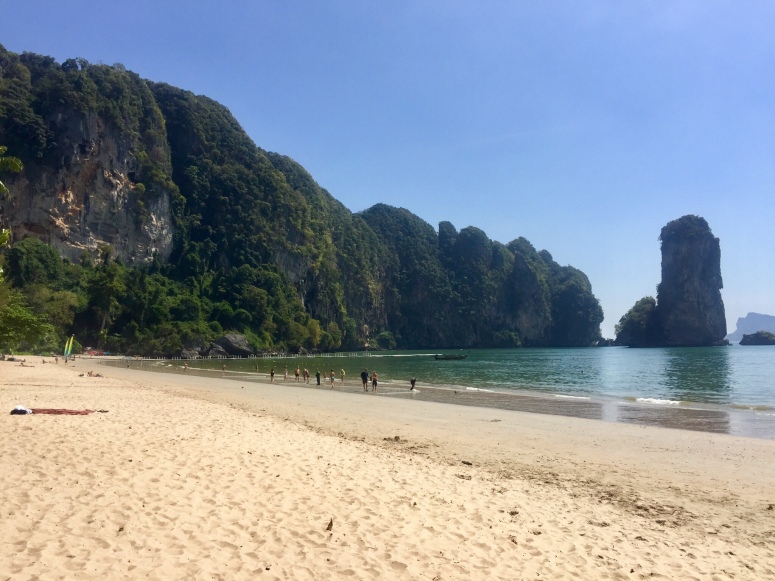 Being Wednesday 14th February, it was also Valentine’s Day. We didn’t do anything for it as we really don’t have the budget for things like that and, in all honesty, we both only remembered half way through the day. Our hostel gave us a little box of sweets each when we arrived back that afternoon which was very nice and all the restaurants in town were geared up for the day with promotions, decorations and signs.

A 10 minute boat ride from Ao Nang is Railay. This island is smaller and much less densely populated than the islands we have been on so far but is great for a day trip. There seemed to be a lot of resorts on the island but that obviously wasn’t in our budget and also, due to the number of day trippers, I’m not sure I’d like staying there too much as you’d be paying a lot but it wouldn’t be any more secluded or quiet. 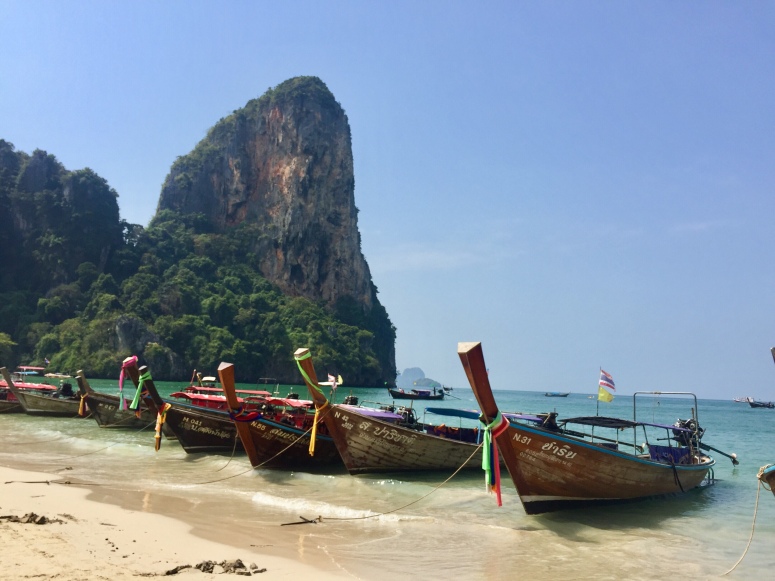 To get to Railay you buy a boat ticket from the ticket counter next to the beach with is 200 baht (£4.50) for a return. Once they have enough people – we had 8 on the way there and 7 on the way back – they take you to the boat and off you go. It’s not very far at all and the boats drop you off on the West Beach which was nicer than the beach on Krabi but not the nicest of the beaches on the island. It was a beautiful clear day without a cloud in the sky. The beach was already a hive of activity with the opportunity to rent kayaks, buy fruit shakes, swim or sunbathe.

We decided to have a walk around the island to start with so that we could decide where would be best to spend the rest of our day. There are a few paths that cut through the centre of the island which takes you to two other beaches: the East beach and Phranang Beach.

As we were walking through we came across loads of monkeys running along the walls of a hotel and swinging in the nearby trees. They were Crab Eating Macaques and lived up the mountains in the forests but also enjoyed swimming in the sea to get their food.

When we walked back, what we thought the east beach was, didn’t seem to exist as a beach as the tide had fully covered it. It is more of a bay and, from what we could tell, is mainly used to offload supplies. We walked back along this beach in the evening and the tide had come very far out which meant that giant tractors and carts had to be used used to get goods and people to the boats in the water. It was remarkable the difference the tide made to the beach! 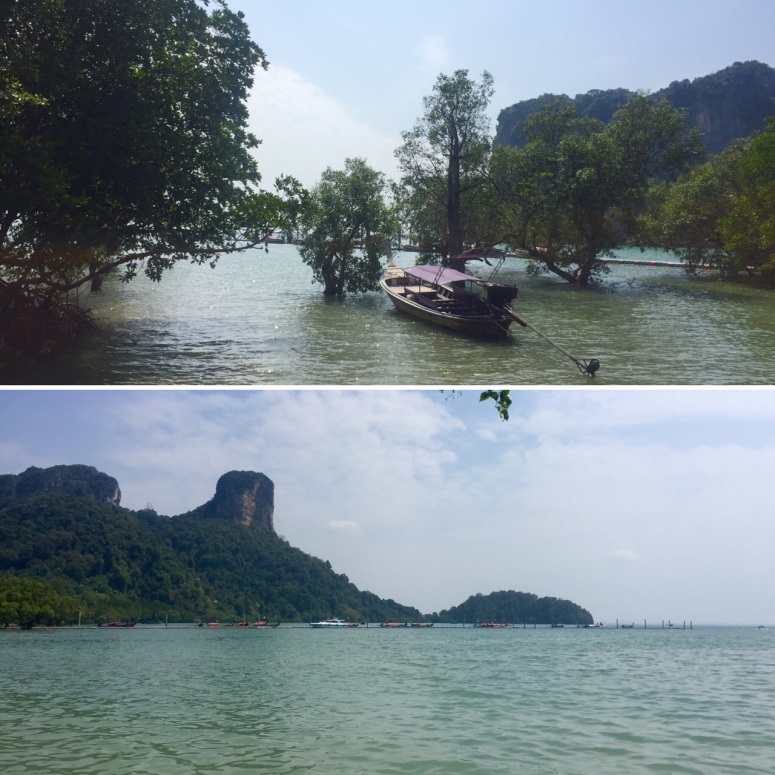 As we followed the path through the middle of the island and along the eastern beach, we passed enormous cave formations with stalagmites and stalactites on the side of the path. It was cool to get so close to them as Niall pointed out we don’t often get to see the limestone formations so up close. 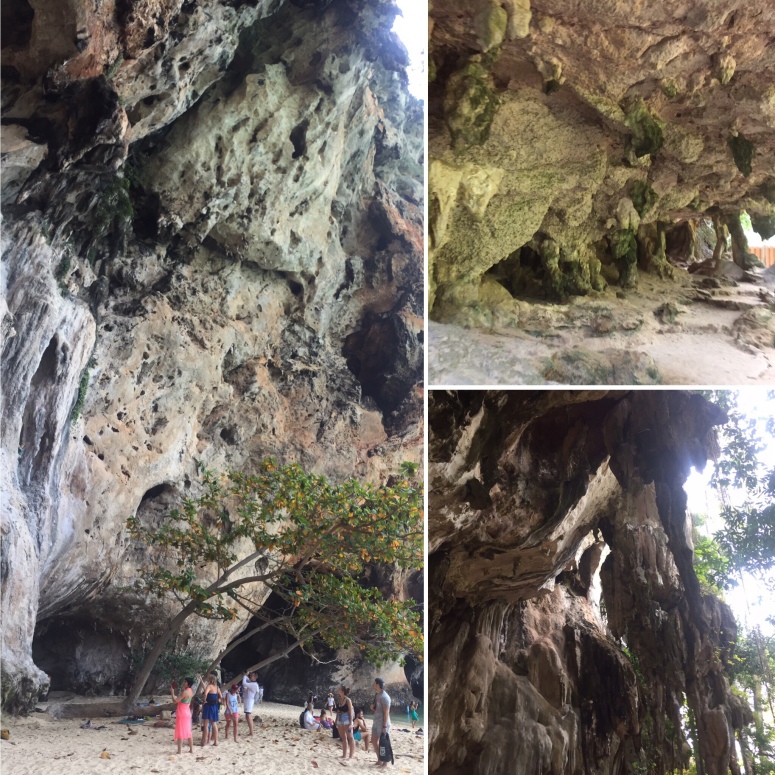 The path we followed led us to Phranang Beach which is the best beach on the island. The sand was so fine that it felt like walking on baking flour and the water seemed cleaner and was actually clear (on Krabi the day before it hadn’t been). We easily found a spot to relax for the day and had a really nice time.

At the end of the beach (the left if you’re looking out to sea) there is the Princess Cave which houses a small shrine. The locals believe that a princess lives in the cave and that she will preserve their livelihood and grant their wishes. A popular gift that is left is the lingam which is a penis shaped sculpture carved from wood and that’s believed to bring prosperity and fertility to the whole of earth and mankind. We really hadn’t expected to see so many penis shaped sculptures and offerings (or any to be honest) and it was pretty funny. 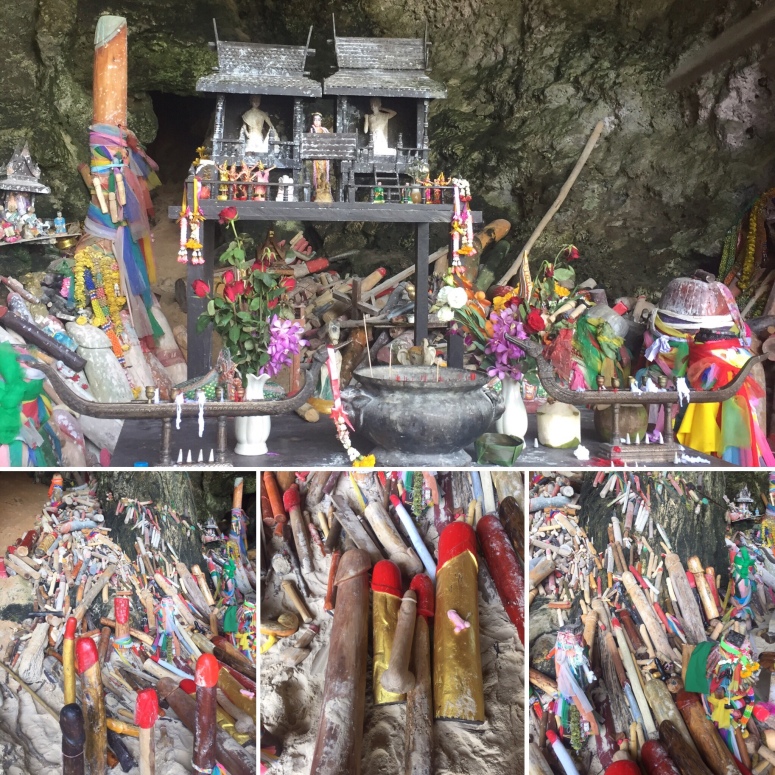 Railay is known for its rock climbing due to the accessible and jagged rocks on the limestone cliffs that come right to the beach. When we were sitting in the shade on the beach, having some food we heard a bit of a commotion. A child was rock climbing up a rock face that went onto the beach, he’d got to the top and then freaked out and started crying, frozen with fear. His dad was trying to reassure him and coax him back down. Everyone in the area watched as he shouted to his son and eventually the boy began his descent. When he reached the bottom the beach clapped and it made me so happy that, no matter where in the world you are, everyone came together to will that boy down to safety and then applauded him! It was a nice moment and I think the applaud (as well as hugs from his mum) helped the boy feel better about his little ordeal.

We stayed until around 4:30 when we went back to the western beach to get a boat back to Ao Nang. After watching the sun set we headed to the same food stall we’d been to everytime as it was the cheapest we’d found in the area and we liked the lady who ran it. This was a few tables and a small bench, sink and fire stove over a roof which looked to be attached to the edge of a building. A very happy lady who always wore colourful head scarfs tied up around her hair so that it wasn’t an issue whilst she was cooking was the only worker. She had a board of the food she offered and handed you a piece of paper when you arrived for you to write down your order and then she would cook it. In the three days we visited it was always busy and so, even though the food was cheap, she must be making a killing! We had pad thai, fried noodles, fried rice and Thai salad and all of it was really nice and only for 50 baht (£1.15) each. Since it was so cheap it meant we were able to go to 7-Eleven afterwards and get a 10 baht (£0.20) ice lolly to have for dessert!

Ao Nang in the Krabi province was the perfect place to spend a few days to do relatively little although, had we wanted to, there would have been an awful lot we could do here as a number of tours ran from the area, you could hire kayaks and reach most of the islands yourself (if you really wanted to do that much physical exercise) and you could rock climb. We were very content with how little we did and Ao Nang was just what we needed before we headed east to Koh Samui, Koh Phangan and Koh Tao.