We were picked up at 12pm to get a 1pm ferry (18th February 2018) to Koh Phangan even though the journey took all of 10 minutes from the hostel to the pier. It was another beautiful day and the journey to the island was going to take around an hour so we’d have plenty of time to look around our new island for the rest of the day.

After arriving, we checked into the Lazy House Shenanigans Hostel (often just referred to as Shenanigans) which was a short walk from the pier and near to Haad Rinbeach which is a nice stretch of beach but also the home of the full moon party – an infamous party like no other full of drunken Westerner’s, UV paint and buckets of alcohol. We weren’t in Thailand when there was a full moon party on so weren’t able to go to one but we know people who have been and they had a great time.

The hostel had a pool, aircon, free drinking water and good wifi so there were no complaints from us. Koh Phangan isn’t the cheapest island we’ve stayed on, particularly for the accommodation, mainly due to them being able to increase prices to accommodate for (or exploit perhaps) the massive volume of people who flood to the island on a full moon. Saying that, you could still find toasties for around 30 baht (£0.70) and pad Thai or fried rice for 50 baht (£1.15) so we were happy with that.

We spent the rest of the day walking around our little section of the island to get our bearings and see if we could find a dive shop (which we couldn’t). We had thought about diving from here but after not being able to find a dive shop we decided to save our diving for when we got to Koh Tao and so went to chill on the beach instead. It was around 4ish so we didn’t bother to sunbathe but just found a shady spot and people watched and enjoyed each other’s company.

The island is meant to be a party island but it was very quiet – with it not being full moon time – and so that evening we went for food but didn’t go out as there was only a few drunken people (and I mean like five people) dancing on the beach so not really a lovely scene to get us wanting to part ways with our cash for booze.

It’s a nice island though and we had booked to stay three nights before leaving for Koh Tao (our final island) on Wednesday 21st February. We had a restless night due to someone in our room being too drunk but then spent the next day having a relaxing on morning and then chilling on the beach. We saw our first clouds for a while and even experienced some rain which thankfully blew by quickly so that we didn’t get too wet. The water wasn’t as calm either as it had been the day before and there was more of a wind so we didn’t get that hot on the beach which is always nice.

We relaxed back at the hostel for a few hours before heading out for tea and hopefully a more lively party scene. It was probably quieter than the previous night but, in fairness, we didn’t go actively seeking a party so I’m sure if we asked where the party was that night we could have found one – albeit most likely not super busy. We had fried rice for tea and then banana pancakes with chocolate (for Niall) and Nutella (for me) which we ate along the beach. When you’re travelling for such a long time and going to so many places you actually don’t mind having quiet evenings. It’s better than wasting money on drinks just for the sake of it.

The next day we booked our transfer to Koh Tao which cost us 450 baht (£10.20) and would take a few hours from being picked up to reaching Koh Tao. Once that was sorted we went and hired a bike for the day which cost us 250 baht (£5.60). The bike had no fuel and they tried to get us to buy theirs saying we wouldn’t make it far to get to another petrol station and that they were the cheapest charging 50 baht (£1.15) per litre. We decided not to believe them and chanced it, getting out of town and finding fuel nearly half the price so it was worth it.

I hadn’t realised how hilly Koh Phangan was and we spent a lot of the day going up very steep hills and back down them – not a place you’d want to walk around! The roads were well paved making it a pleasant drive around and we had nice weather so knew it would be a good day. 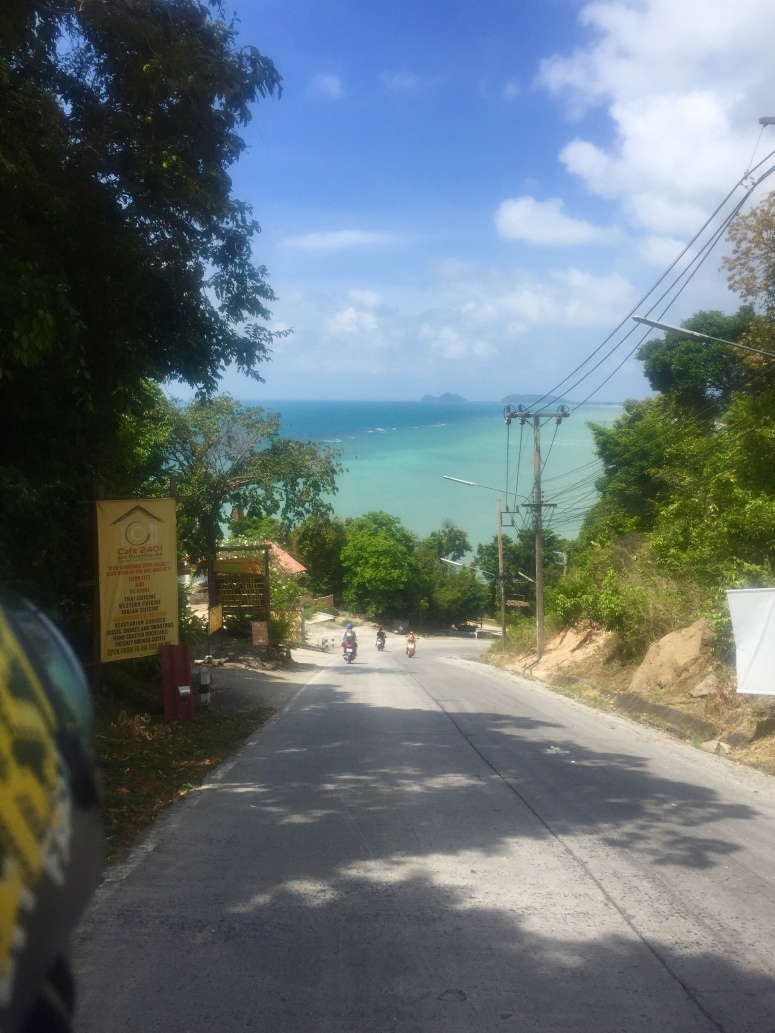 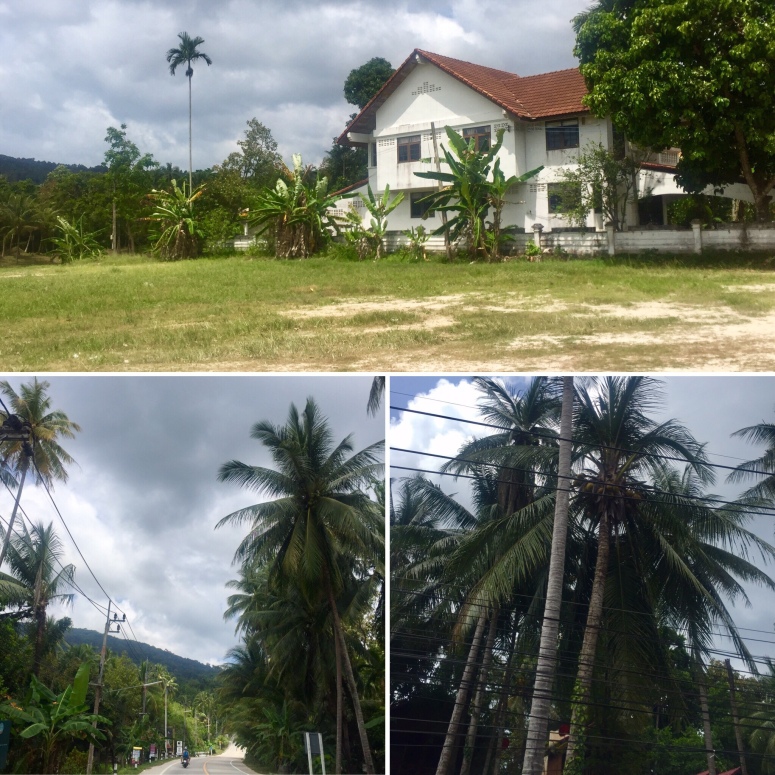 Our first stop was to Thong Sala which is the main town on the island. This seems to be where the majority of people live and there are a couple of supermarkets here as well as accommodation, shops and bars. This is also where the ferry is to take you to Koh Tao so we got to see where would be tomorrow before we left the island. 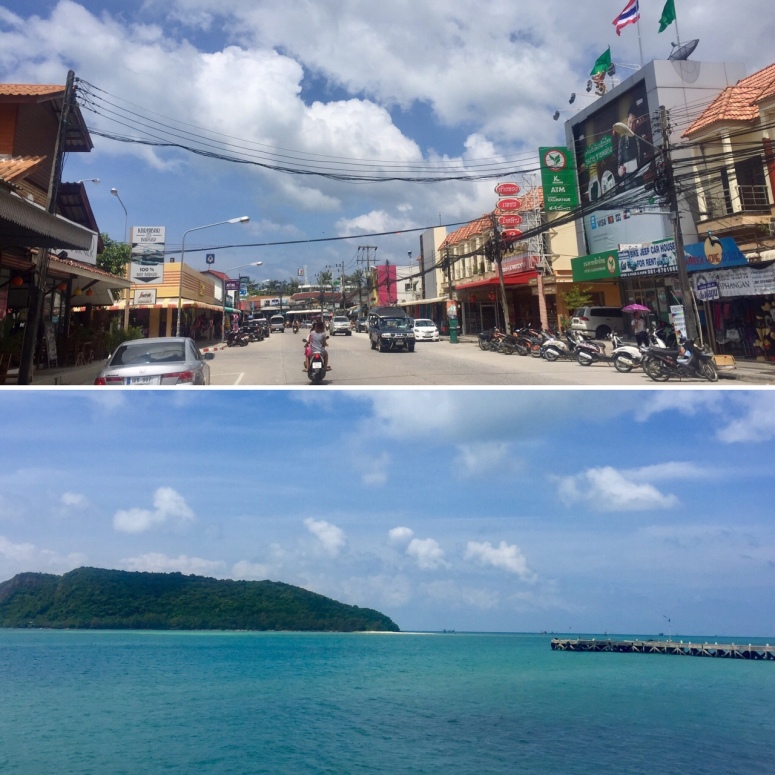 On our way out of town we passed what claimed to be the biggest Yang Na Yai tree in Thailand with a circumference of 14.64m and its height 53.50m! This tree is estimated to be around 400 years old and was just off the side of the road, not in the middle of a forest like I would have expected. It had small shrines dotted around it where people had strangely left full, open bottles of Fanta and yogurt drinks almost as if they were offerings (which I guess maybe they were). There was also coloured fabric and fake flowers draped around the trees which we have seen other places on trees and boats and are blessings from the monks. 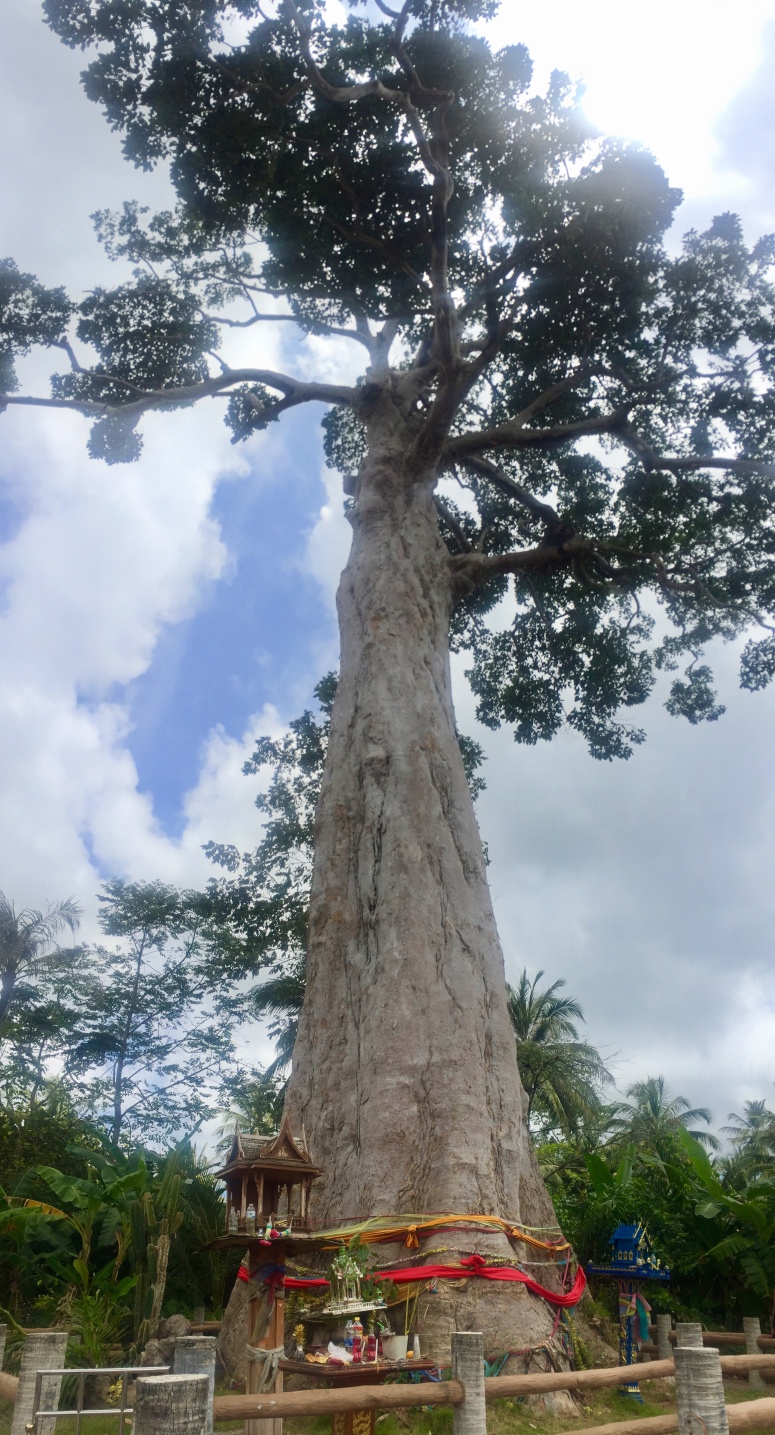 We went through the middle of the island surrounded by jungle and palm trees until we reached Thansadet Waterfall which we hadn’t heard about before our drive but was signposted so we thought we’d stop and take a look. That’s one of the best bits when you hire a bike and explore an area or island, just seeing what looks interesting or has drawn a crowd and stopping to see what it might be. It wasn’t a massive waterfall but had some huge rocks where you could sit by the falls and look out over the trees and so was nice for a small stop off.

We then carried on until we reached Haad Than Sadet beach. This was a pretty little beach full of small pebbles instead of sand and housed a few accommodations which would give you peaceful beach bliss and views over-looking the water. We relaxed under the shade of a palm tree and Niall even had a nap. It was a really relaxing place with few people and just the sound of waves and birds around. 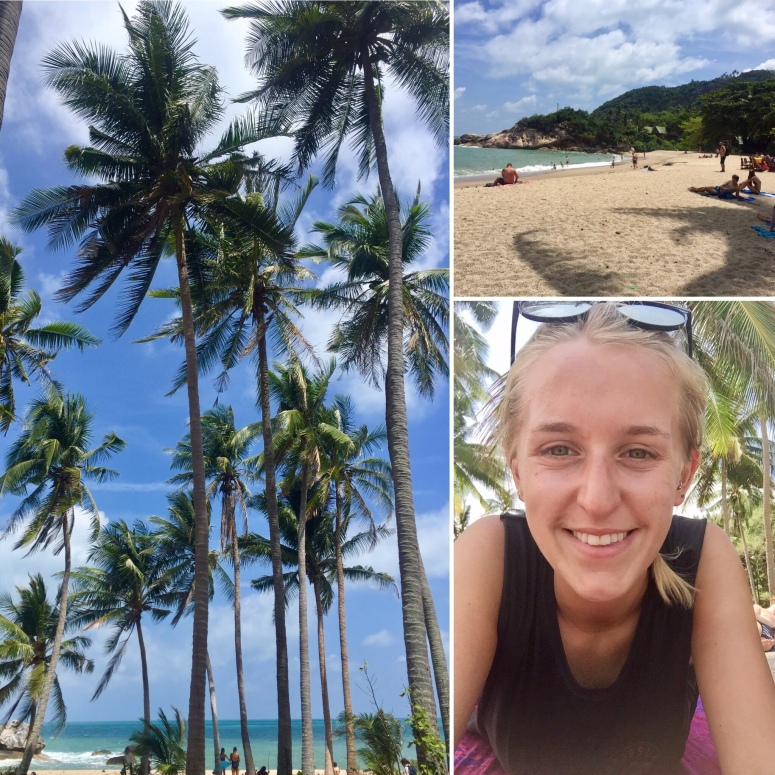 After about an hour we got back on our bikes and headed to another beach called Ao Thong Nai Pan Yai. This was a sand beach and had a little village around it which was welcome as the main reason we had left our relaxing spot on the other beach was to find food! We bought snacks from 7-Eleven and ate it in a shady spot on beach. This was a busier beach but also very nice. Exploring showed us that even if you were hear during the Full Moon Party, you would easily be able to find quiet, peaceful seclusion away from the partygoers.

We didn’t have anywhere else specific to go and so drove around along the coast until we felt like going back to the hostel. The coastline was calm and, with the sun being lower in the sky, the reflections of light on the sea was really pretty. We stopped at a beach called Ao Hin Kong which was a stretch of beach that had a sand bar attached which unfortunately we just missed being able to walk on due to the tide coming in. It was a nice drive around and we headed back around 4:30/5pm. 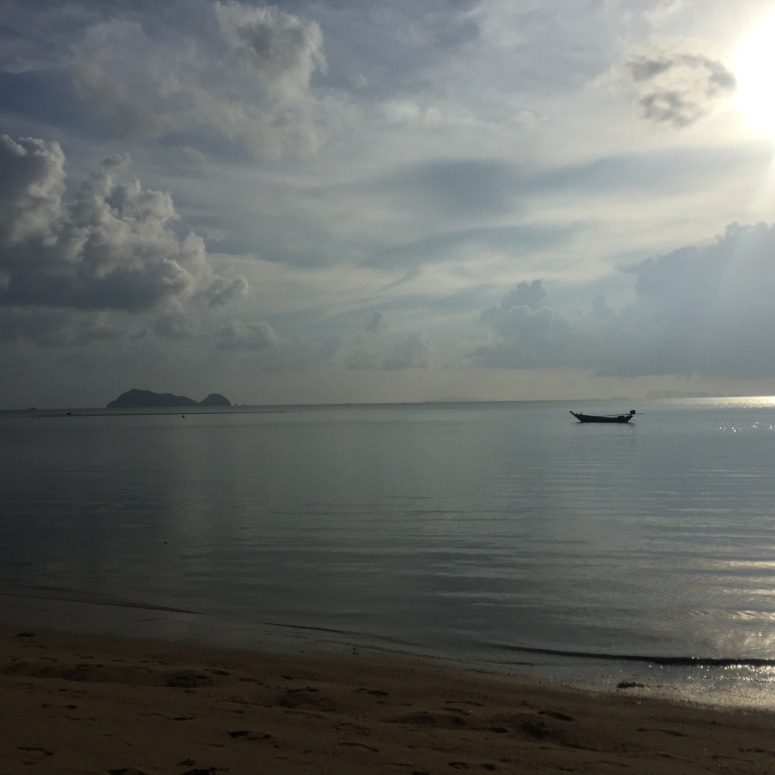 On our way back, just as we drove over the top of the hill, we were confronted with lots of monkeys on the road. Despite the signs someone was feeding them causing a lot of commotion as monkeys fought each other for the food. We watched for a while with many other passers by but stayed on the bike in case the monkeys became agitated and aggressive. We hadn’t seen any monkeys that day so it was cool to see them but, considering their behaviour, I was surprised to see it was a little kid who was doing the feeding as the monkeys could have easily turned aggressive towards her.

Further along the road, nearer to Haad Rin, we saw what looked like a temple similar to that in Angkor Wat in Cambodia but turned out to be a hotel. With it being a hotel we couldn’t go in but we had a look at it from the outside and I imagine it would cost a lot to stay there as it was right on the edge of the cliff looking out over the sea.

That evening we headed to Sunset Beach for the sunset and then went to get some food. Koh Phangan has a lot of dogs and one adopted us for our time at the beach and sat with us during the sunset. I imagine if we hadn’t got on a bike to go for food it would have walked with us into town too! The sunset was pretty and overall our last day on the island had been really nice.

We had hoped to go to a waterpark that’s on the island that’s like an assault course like something out of Total Wipeout. Unfortunately it was closed for some unknown reason so we weren’t able to go but we still really enjoyed the day anyway. Koh Phangan is a nice island with other things to do other than the full moon party so I’m glad we came even though there wasn’t any parties to go to.