On 28th March 2018 we got on a crowded public bus from Pushkar to the nearby city of Ajmer – it only cost us 14 rupees each (15p)! From here we bought tickets for an air conditioned bus that would take us to Jodhpur. Our hostel in Pushkar, Madpackers, had been great and given us all the information we needed to get a good bus as well as booking us into their Madpackers hostel in Jodhpur at a great discount. It cost us 600 rupees in total (£6.40) to get the bus to Jodhpur with my ticket costing 100 rupees less than Niall’s because of the Rajasthan state bus discount they give to women. The was a massive upgrade from our previous bus and our journey ran very smoothly with us arriving into Jodhpur four and a half hours later at 4:30pm.

The Madpackers hostel in Jodhpur was probably the nicest hostel we have stayed in during our entire trip away. It was incredibly modern with an open plan kitchen/lounge, air conditioning that ran constantly throughout the entire hostel and a TV that had plenty of movie channels. Just like the Madpackers in Pushkar, there was also unlimited breakfast, free drinking water and good wifi – we couldn’t have asked for more. Farhan, who was running the hostel when we were there, was the nicest guy and helped us see everything we wanted to see in Jodhpur using the hostel’s shuttle service. When we were there, there was only a few other guests and we all got on well which made the place feel even more homely. To top all this off, the restaurant they had at the top of the hostel’s building, Purple Saffron, sold milkshakes and nice food so we couldn’t have asked for more from the place.

The shuttle service ran by the hostel first took us to Umaid Bhawan Palace. This is one of the largest private residences in the world with 347 rooms. Some of the palace is still lived in by the Jodhpur Royal Family, some of it is a seven star hotel and then a small section is a museum about the royal family for commoners like us. The palace was a very grand building with a nice garden and also had an exhibition on classic cars which was a bit random but also cool to see. 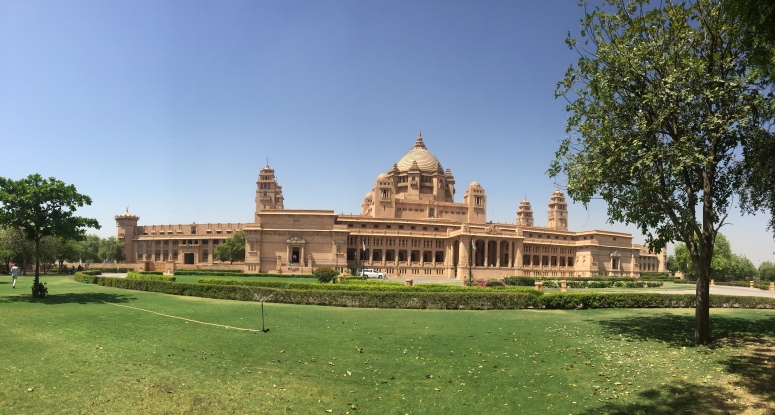 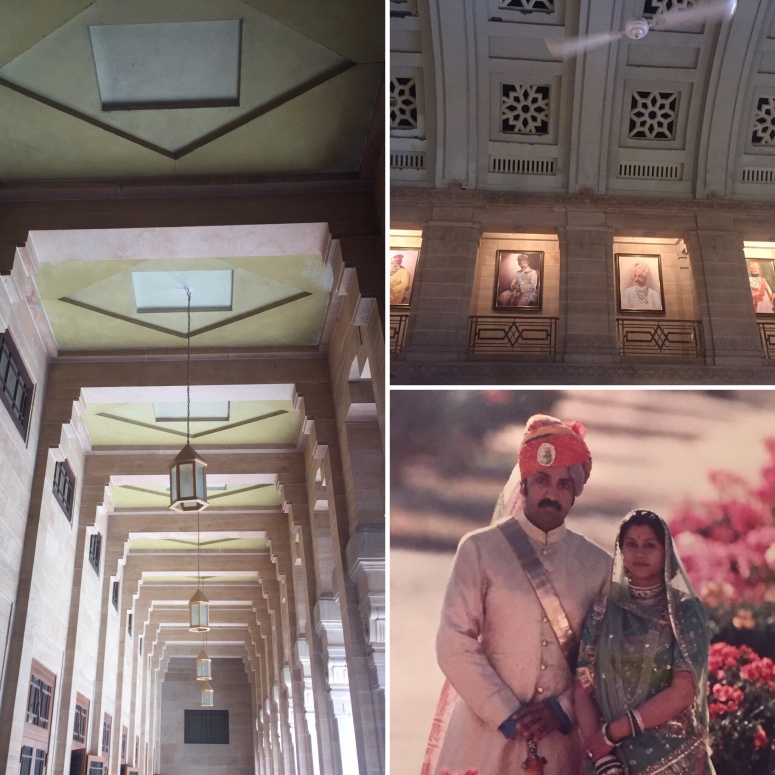 We were only at the palace for half an hour before we were driven to Mehrangarh Fort which we both agree is the best of the forts in Rajasthan. The entry fee cost us 600 rupees (£6.40) and included a very good audio guide that told you loads about the fort as well as having vocal clips from the Royal family. One thing I loved about the tour (aside from the great detail) is how British the narrator was, it was one of the most British voices I’d ever heard and made everything he said sound more important and clever!

Our audio guide told us that the fort had changed quite a bit as different rulers had lived there, all of them wanting to add their own stamp on the place to meet their specific needs. As you enter the fort, you pass a stone plaque on the wall by the entrance gates. This is to commemorate a man who sacrificed himself for the fort. Apparently, when the fort was first made, there was a curse on the land to create a famine. A priest said that to remove the curse a human sacrifice had to be made and that this would end the drought. Someone volunteered to be sealed alive into the foundations of the fort and eventually the drought ended. The man’s family are still very well treated by the royal family for this sacrifice and the place he died is marked in remembrance. I couldn’t imagine feeling such strong devotion as to end my own life in what would have been a slow death to starvation and suffocation for the royal family. 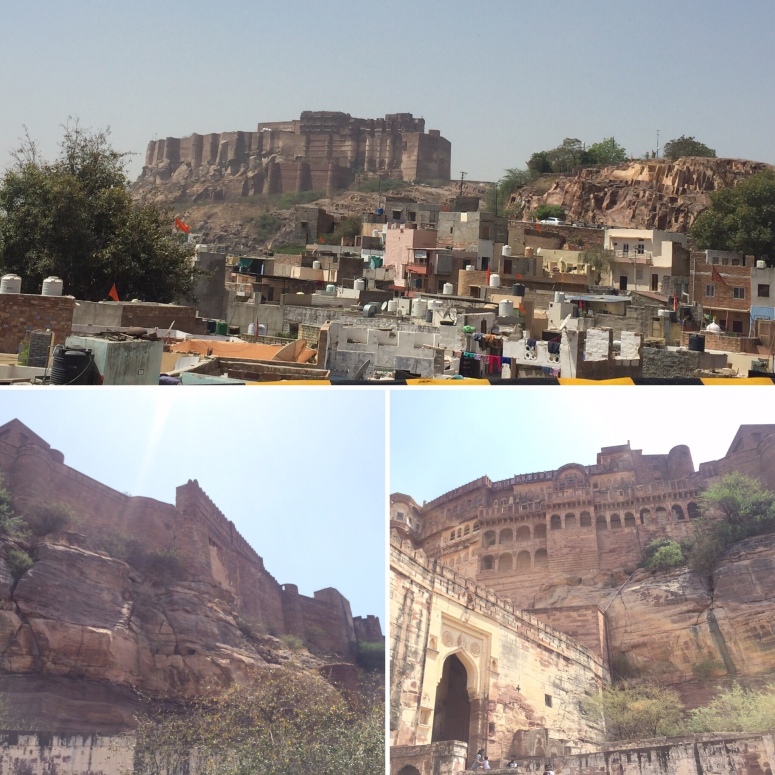 To reach the main buildings of the palace you have to climb ramps that curve around before reaching the main gates. This is really clever as it was used to prevent the elephants that were used in past warfare gain momentum so that they couldn’t charge the gates and force them open. The fort faced a number of wars and was never once infiltrated, even when on one occasion they were under siege and stuck inside the fort with no supplies coming in and out for months.

On the walls of the palace there were a number of handprints that were moulded into the wall. The handprints are from a death ceremony called Suttee which last occurred at the fort in 1843. Suttee is when the widows of the king who had just died would leave the fort, following the dead body of their husband through the streets of Jodhpur. They would be wearing their wedding dress and leave offerings at the different shrines and temples as they walked through the city, singing prayers and hymns as they went. Once they reached the funeral pyre that their husband’s body would be cremated on, they would sit on top of it and let the flames burn them alive so that they died with their husband – gruesome really. I wonder how many of them were scared as they walked through those streets or waited for the flames to hit them. I Googled this ritual and it wasn’t always a voluntarily decision but sometimes would be caused from widows committing suicide by coercion or force which is really sad and they must have been terrified when they had to go on the pyre. 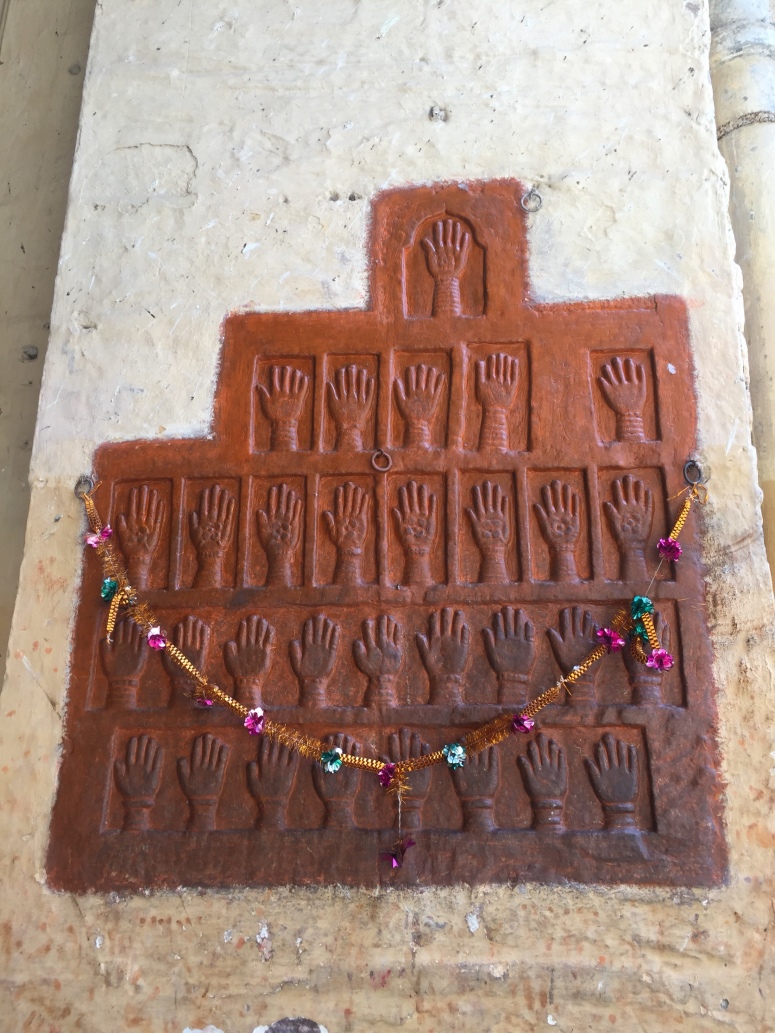 The current King of Rajasthan was coronated at the age of 4 after his father died in an accident. We got to listen to accounts from people at the coronation as well as from the King himself who was the one who set up the audio tour and opened up the fort to the public. At the coronation people would approach the king and offer gifts. This first started with the noblemen and other royalty and then was opened up to the general public. Apparently the young king, when given a gift from one member of the public, would then give that gift to the next and so on. This had never been done before and one witness said that this was when he had no doubt the King would grow up to be a great leader.

The coronation occurred in a courtyard surrounded by carved windows and detailed walls. It overlooks the city and was next to the exhibition halls, more courtyards and other grand buildings. Throughout the fort there were patterns, carvings and pretty details which made this place, particularly with the level of restoration this fort has undertaken, a very nice place to walk around and explore. 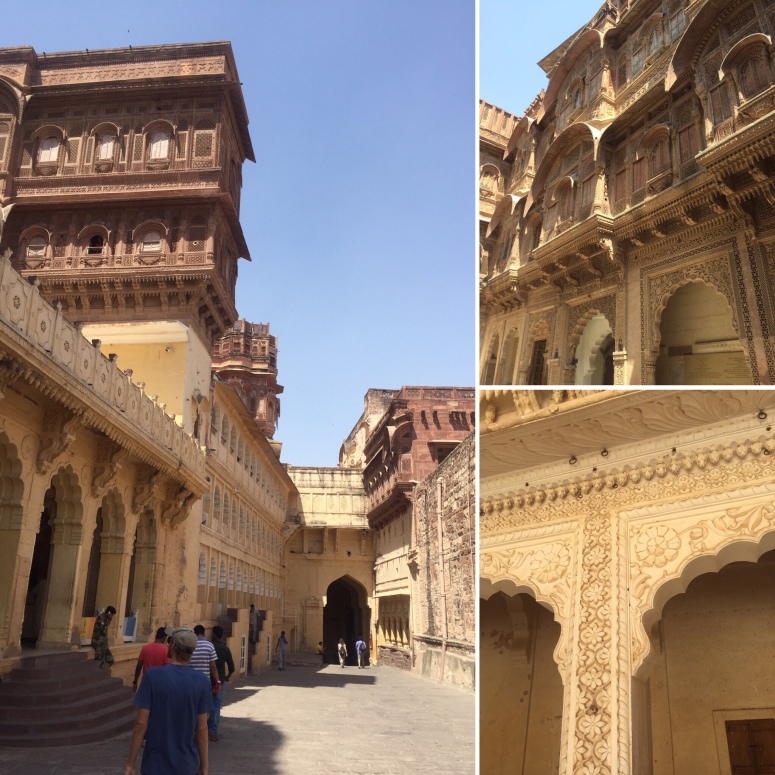 There was a room full of palanquin’s that had been used by the Royal family over the years. A palanquin is a carriage that’s either an open air seat or veiled with walls and roof that is carried by people through the streets. You will have undoubtably seen these in films or tv shows. Male royalty would sit in a seat that could be seen by everyone without any curtains blocking him from view. Female royalty however would be carried in curtained seats so as to be hidden from the crowds. One time, the Queen Mother of Rajasthan went to the UK and had a palanquin to get her from her Rolls Royce to her hotel. A photographer managed to snap a picture of her but it was just a small section of her ankle. This still made the press to the outrage of the Jodhpur royal family so they bought up all the newspapers so that it couldn’t be seen by the Indian population. I find this so funny that seeing a small ankle would be so bad to warrant this! 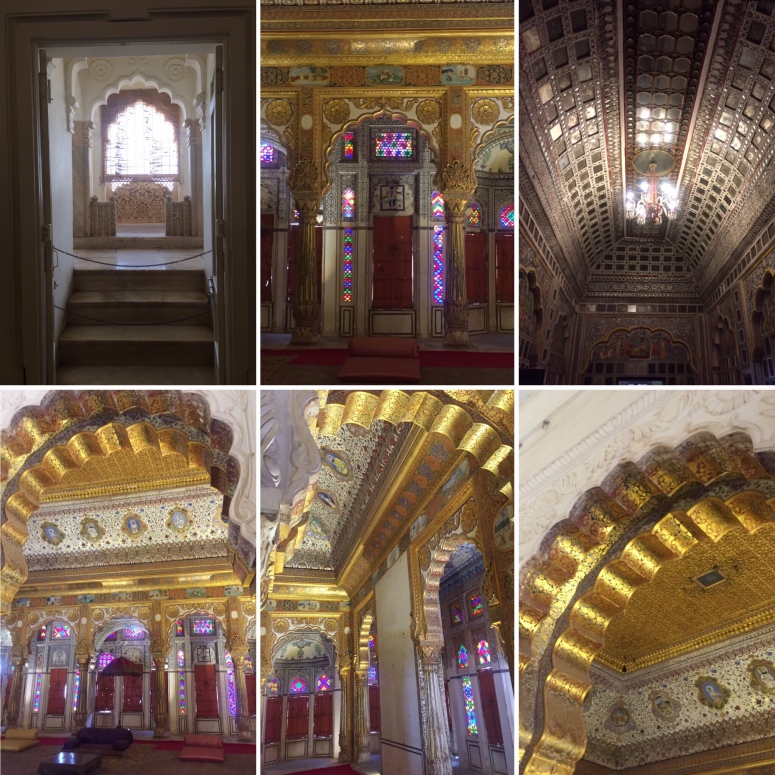 As you look over the city, you see a city of different shades of blue from the roofs and walls of buildings. The paint they used to create the blue is used to cool houses and our audio guide also said that it acts as an insect repellent (or at least the original blue paint that they would have used did). I liked the blue of the houses and it was nice walking in from the fort to the city and seeing the different shades of blue around town. Yet again India had showed us how colourful it could be which I really enjoyed. 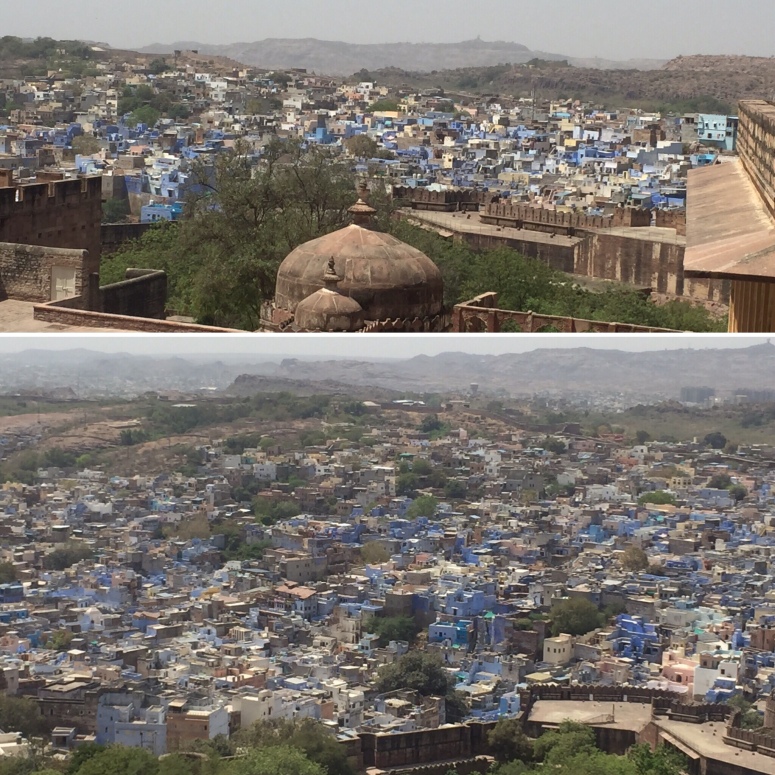 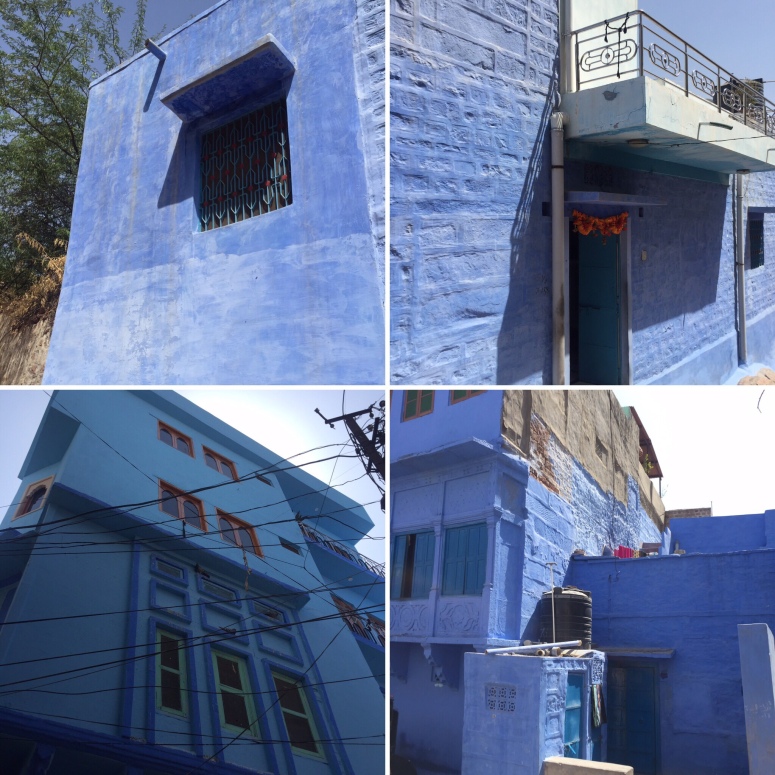 After leaving the fort on foot, within half an hour we were in the centre of town which is marked by a large clock tower called Ghanta Ghar. This clock tower is sometimes referred to as ‘the clock tower of Rajasthan’ and is the focal point of the city. We had a walk around the tower and looked at some of the shops in the market stalls that surround it and then got taken back to the hostel by a tuk tuk. The temperatures were in the high thirties and we didn’t want to push ourselves too much whilst we still got used to the heat. It was good to walk around though as the stalls sold a range of things and there was a lot of people buying and selling goods even in the middle of the day heat. 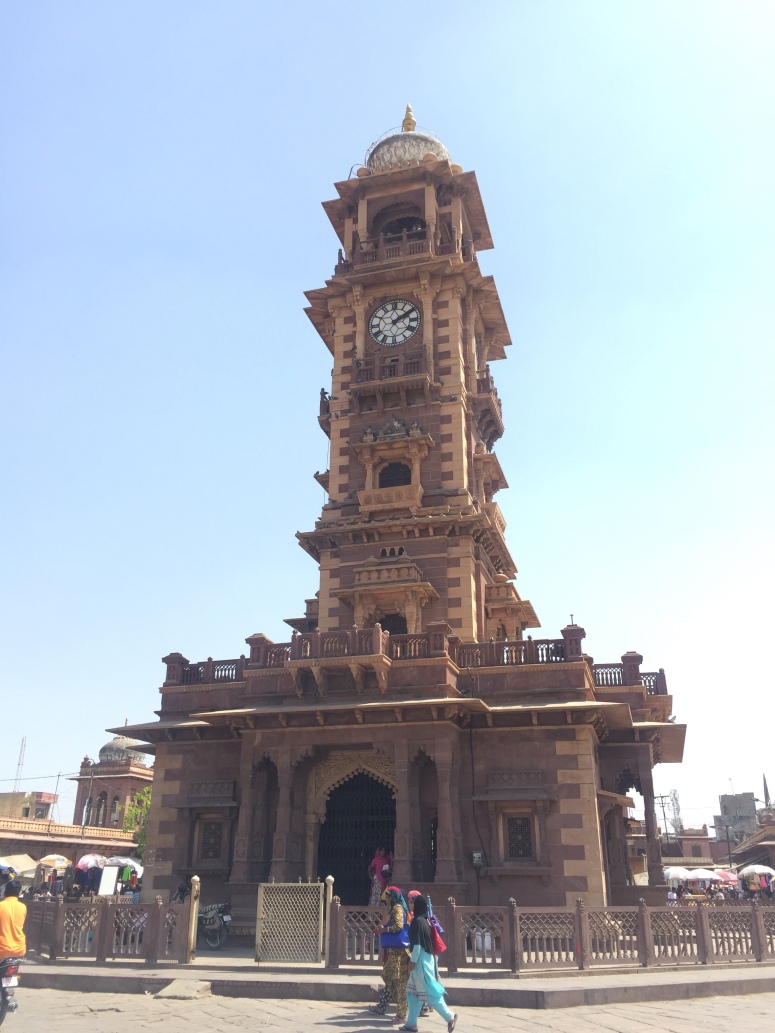 On our second day in Jodhpur (30th March 2018) we went to a temple called Jaswant Thada. The temple was built in 1899 to be a cremation ground for the Marwar royal family. The temple is made of very thin sheets of marble so that they omit a warm glow when hit by the sun. This was a really nice temple that had landscaped gardens and views over the city. The temperatures were still high but we had a lovely time walking around the grounds and going into the temple. 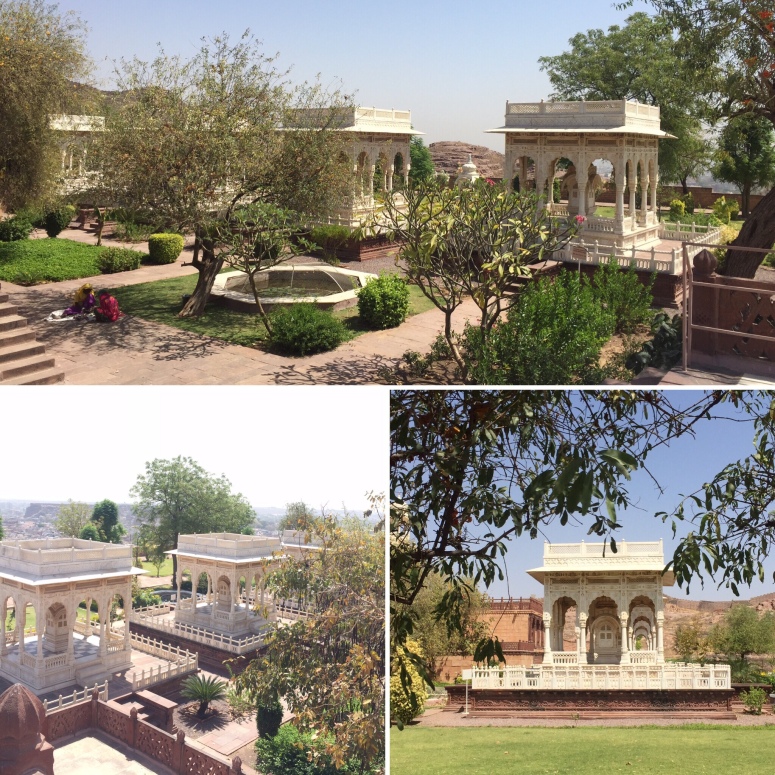 We walked back into town and wandered the streets of Jodhpur to soak up some more of the life there. On our way we headed to one of the many step wells that are dotted throughout the cities of Rajasthan – Toorji’s Step Well. A step well is a body of water reached by stone steps. This used to be a source of drinking water for the city but is now used as a spot for kids to hang around and there are often people swimming here too. We found a place in the shade and sat here, enjoying the grand structure as it’s something we’ve only seen in pictures before. There were kids playing here when we were there but no one was swimming although we had seen videos of kids jumping off the top of the step well into the water below which is very high! 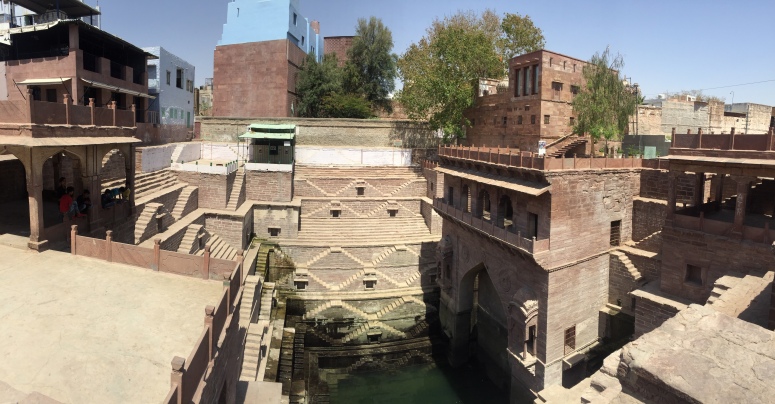 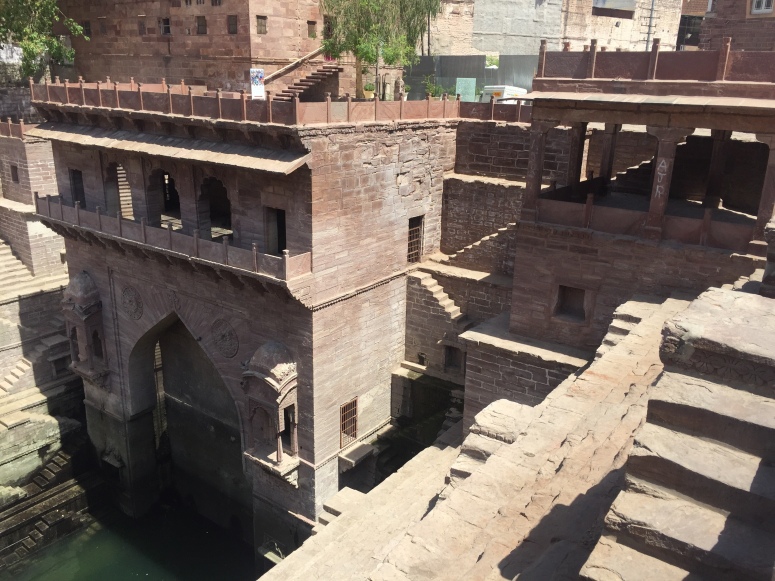 The streets were packed with people going about their day and it was fantastic. Having to dodge carts, cows and many, many people was all part of the fun and we got a great feel for the place. 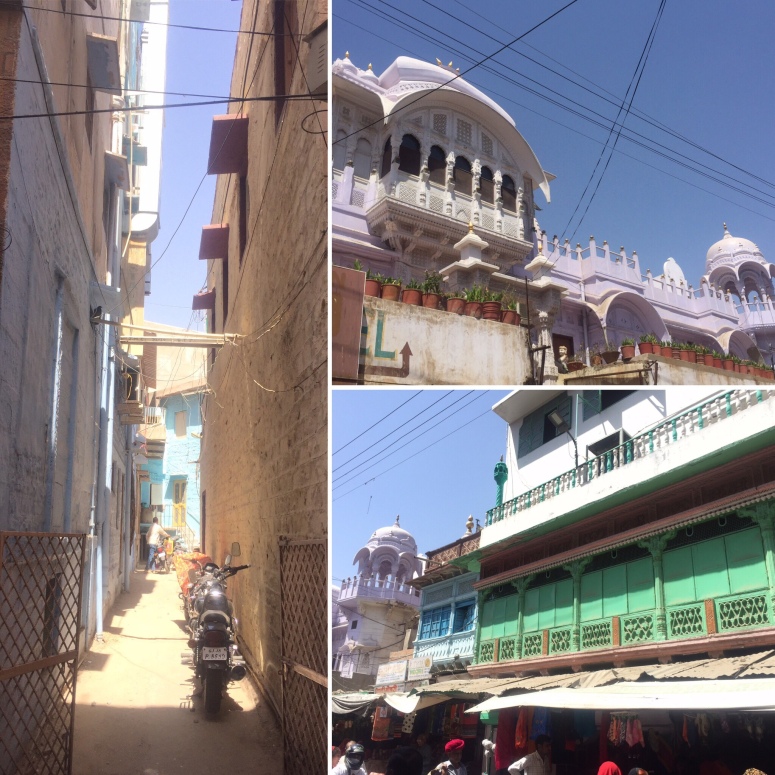 We really liked Jodhpur. It was full of life, had a great fort and the blue looked great. I think it was our favourite place in Rajasthan so far and that was helped by the great hostel we had lucked out in staying at. It was almost sad to carry on to our next stop: Jaisalmer.