On Tuesday 7th July 2018 we got on a 6:40m train from Ella to go to Kandy. Often described as one of the most scenic train rides in the world, we couldn’t miss the opportunity to see it for ourselves. We had been lucky enough to have our guesthouse near to the station so didn’t have far to walk with our big bags and were quickly through the station (which is very little) and onto the platform with lots of other travellers waiting for the train. By picking the early train it was a lot less crowded than some of the others (or so we’ve been told) and so we didn’t have to fight to get a seat or to get a spot by the doors or windows for the views – saying that, it also wasn’t peak season in Sri Lanka which probably helped! This is also one of the few blue trains that does the route as it’s the longer, express train and there are some shorter, red trains running at other times during the day (like the one we had seen when visiting the nine arch bridge – see my previous post).

Our journey started by having to perform the physical act of getting on the train. This probably sounds like the most obvious and stupidly specific detail I could mention but the train didn’t stop on the track next to the platform meaning we had to walk onto the track to get on… and we had our giant bags on our backs. You may never have noticed but I invite you to look next time you get on a train – they’re quite high off the ground. It was a funny sight watching people (including myself) being pulled up by the conductor and pushed by people on the ground to lug themselves (as we’re all now considerably heavier due to our rucksacks) onto the train. Niall made this look very easy and I have a feeling my hoist up was a lot less grateful!

I had been lucky for many reasons to be travelling with Niall but one that I found particularly when on trains in India and again on this train was that he is much stronger than me and is able to get my bag above his head to stow away on the luggage racks. I often thought how I’d have managed that aspect of travel without him there but then, who knows, maybe I would have just gotten ridiculously strong by necessity?

The journey itself was 6 hours (we left at 6:40am and arrived around 12:40pm) but never once were we bored or did we want to sleep (despite how early it was). We were lucky enough to have great weather so got to enjoy the amazing scenes of tea plantations and rolling hills on our journey across the country. According to google maps the train journey is around 130km through mountains and countryside.

The Sri Lanka railway system was built by the British in 1864 to transport the coffee and tea grown in the country from areas such as Ella to the ports in Colombo to ship it internationally to the other British colonies. They are mainly between the major cities which is why we hadn’t taken many trains on our travels around Sri Lanka.

We were pretty much continuously surrounded my lush greenery that stretched on for miles and then every now and again we would pass a house, someone walking on the tracks (like we had in Ella ourselves) or even a small station. A family who were on the train even gave us sandwiches that they had made for them by their hotel which was very nice and kept us full on the journey to Kandy. The whole feel of the train was happy and friendly with people helping each other get those famous pictures of you hanging out of the train door.

Speaking of hanging out the train doors, we didn’t spend much of the journey in our seats. I don’t know if it’s all trains or just trains along this route but many of the doors in the carriages are constantly open and so you’re able to stand or even sit at the doorway and look out with an unobstructed view of the countryside. Niall and I often did this and either left our bags or took turns if we were staying away for longer. It was only when we were near to Kandy that the conductor came along to close the doors, I imagine to stop locals getting a free ride into the city! 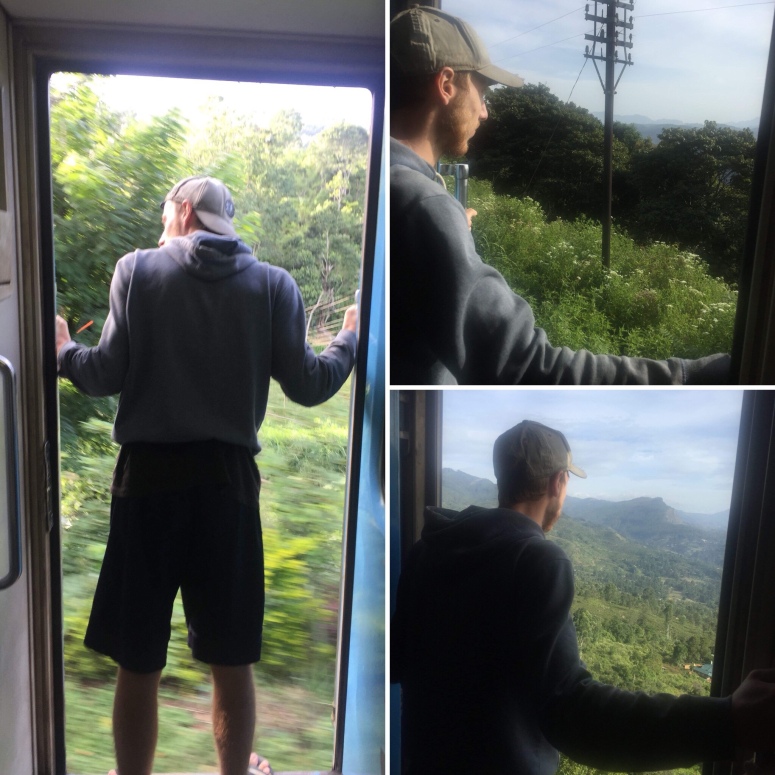 We had loved Ella and the train journey to Kandy had been the perfect way to end our time there, riding on the train we had previously walked the tracks of. We had been very lucky to have incredible weather during our time there as we had taken a risk going there as the weather can be temperamental at that time of year! I would recommend Ella and the train ride for anyone visiting the two places (it runs in both directions) as it’s an easy, convenient and scenic way to get between the two places. I wish we could go back and do it all again.